Asset Allocation
When uncertainty hangs over the financial markets, indices tend to converge. That is true for net sentiment* of equities. Values met in September 2018 and started to fall. As net sentiment for Europe and Japan fell, net US equity values were unchanged. The distance between the data points has narrowed again this month, but is still positive.

The story is the same for bonds. Net sentiment values met this February and moved downward in parallel this month. Notwithstanding the uncertainty, it looks like analysts foresee a change in the direction of growth.

negative, with US net sentiment closest to tipping point. The consen- sus on the continual rise of equities is over, but the bulls still dominate, especially in Japan. That said, this month saw increases in the number of analysts going to neutral, both from bullish and from bearish viewpoints in most categories and markets.

Sentiment figures seem to follow political risk, in particular chances of a trade war between the US and its largest trading partners. As the outcome is anybody’s guess, it pays to dig further down – for example, since US trade policy looks focused on traditional industrial sectors, such as coal, steel and automobiles, high-tech sectors may be less sensitive to perceived political risk.

*Net sentiment is the balance of positive and negative sentiment expressions, expressed as a percentage. (% expecting rise - % expecting a fall). 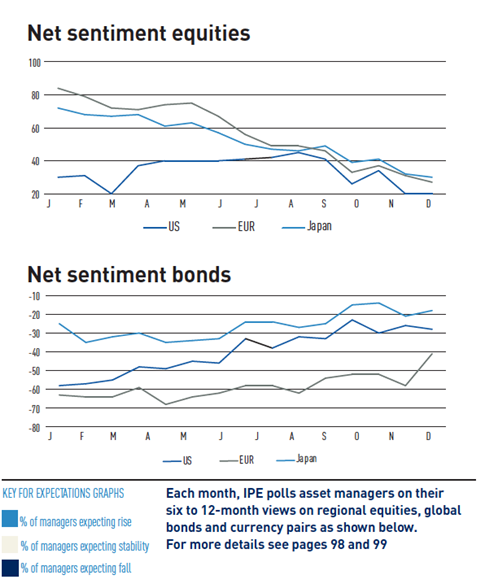