Australian superannuation funds are playing a key role in the largest takeover yet of an Australian infrastructure asset, Sydney Airport, for A$23.6bn (€15bn) in cash.

Barring regulatory hiccups, the takeover almost certainly is now a fait accompli. Shareholders will meet to approve the deal in January 2022.

The sale crowns a wave of frenetic corporate activity leading to delisting of several Australian infrastructure companies, following what has been described as a momentous year for mergers and acquisitions in Australia’s listed infrastructure sector.

At the time of writing, three deals, valued at almost A$40bn, were in progress.

The Australian share market now offers only four pure-play infrastructure stocks, down from 15 a decade ago. Those left still trading on the Australian Securities Exchange are the dual-listed Auckland Airport; APA Group, a gas pipeline operator; and two toll-road companies, Atlas Arteria and Transurban.

Australian super funds already own capital city airports around the country, either in their own right or through their jointly-owned global fund manager, IFM Investors, and other asset managers.

They also own seaports, toll roads and electricity generation and transmission assets – and are increasingly looking to telco towers, fibre and data centres.

Some assets have been acquired under state government privatisation programmes, but increasingly, the hunting ground is the share market.

The reasons are threefold:

• The size of Australian funds has grown to a level that provides scale to buy large assets;
• They need assets that can match future liabilities; and
• They see value in unloved listed assets which are otherwise not availa- ble in the private market.

“So you can understand why unlisted investors with long-term horizons – and the cash – are taking the opportunity to sweep up such under-valued listed assets.”

Shaw points out that this value opportunity is not limited to the air- port sector or to Australia. There has been increased M&A across the global infrastructure sector over the past year as both unlisted investors and listed operators look to capitalise on the value disconnect.

She suggests that any high-quality, long-dated, pure-play infrastructure asset that is trading at a significant discount to fair value is a target.

Shaw also believes that the openness of the share registers of Austral- ian listed infrastructure makes them an easier target, as a buyer does not have to deal with a blocking shareholder or onerous takeout rules.

Mark Hector, Aware Super’s senior portfolio manager, says the industry scheme became the first super fund in Australia to bid for 100% of an ASX-listed company when it made a A$600m offer for telecommunications provider Opticomm last year.

A bidding war with Unite, an existing investor in Opticomm, eventually saw the super fund abandon its bid.

Aware Super drew on lessons learned from the Opticomm exercise to work with MIRA in the Vocus buyout.

Seven years ago, Aware Super did not own infrastructure assets. Today, it has more than A$11bn in its portfolio, representing 8-9% of its total assets under management.

Australia’s largest super fund, the A$230bn AustralianSuper, has been investing directly in large infrastructure assets for some years. Australian-Super is part of the consortium that includes QSuper (a public sector fund), IFM Investors and New York- based GIP that is buying Sydney Airport. 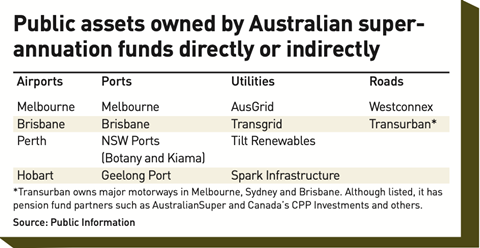 In 2020 it also joined a consortium led by global toll-road operator Tran- surban to buy a 49% stake in West- Connex, a network of toll roads in Sydney, for A$11.bn. The consortium now owns 100% of WestConnex, valued at around A$33bn.

AustralianSuper plans to lift its allocation to infrastructure over the next three years by 3% to 15% of its total assets.

Industry observers say that, con- servatively, AustralianSuper’s infra- structure allocation will grow to between A$50bn and A$60bn by 2024 – up from about A$27bn now.

“If you are an actuary in a super fund and you can see your liabilities growing at 5% over the next 30 years, then you look at an infrastructure asset that has a net highly-certain return of 7% over the same period,” Humphreys says. “Infrastructure looks extremely attractive for you from an asset-liability-matching perspective.

“According to our calculations, many Australian super funds have infrastructure allocations of around 7%. They are well ahead of similar kinds of pension funds in Europe, with average allocations of less than 1%.”

But the rate of listed infrastructure companies being taken private is causing disquiet in some quarters.

Humphreys says there is “wide debate” going on in Australia on ownership – as to whether such assets are better left in the listed format or whether consumers would get better service with unlisted structures.

“The jury is still out,” he says, pointing out that in the UK water market there is now evidence that listed companies perform better than privately-owned ones.

Shaw says owners of contracted or regulated assets, such as utilities and airports, have restraints on how much they can charge on standards of service, and so on. Failing these standards means repercussions, and could damage their return profiles.

“The asset’s contractual or regulatory structure remains the same whether it is held in listed or private hands – we are talking the exact same assets, just with different owners, and the user experience should not change,” she says.

Humphreys says listed assets are under constant scrutiny from the market, the financial press and regulators. This means greater transparency.

“As long as the regulatory regime is secure and strong enough, there should be no impact on the consumer, but of course if a company is not listed, then the consumer who uses the asset loses the ability to invest in the asset.

“That is a loss to the [investing] public when an asset is taken private.”