Was 2015’s unexpected increase in the UK mortality rate a blip or a slowing of the mortality improvement rate? Gail Moss reports

• The rate of mortality improvement in the UK has recently fallen unexpectedly.
• Longevity calculations could be more accurate if they include several factors such as income and lifestyle.
• Bulk annuities and longevity swaps can help protect against increasing longevity.

Life expectancy in developed countries has been increasing at over two years per decade since 1840. Yet the financial shock of rocketing life expectancy is a relatively recent phenomenon.

“In the 1980s and 1990s, pension fund managers and researchers never paid much attention to life expectancy because assets did so well,” says Amlan Roy, head of global demographics and pensions research at Credit Suisse Securities. “There was an average annual real equity premium of 5-6% compared with annual increases in liabilities of 0.5%, so long-term changes in life expectancy were not an issue.”

But a perfect storm – starting with the financial crisis, and followed by lower returns and a long period of ultra-low interest rates – has been exacerbated by the impact of current and expected future increases in average life spans.

Over the past couple of decades, we have become accustomed to the idea that not only life expectancy itself is increasing, but that the rate of increase is accelerating, as all the positives in the real world – health, education, social reforms – combine to extend human life.

In the UK, the annual rate of mortality improvement from 2000-11 hit 2.5%. But more recent evidence suggests that, in the UK at least, longevity trends may be changing. “In the past four years, mortality has been heavier than expected, with more people dying,” says Tim Gordon, partner at Aon Hewitt. “In 2015, it was off the scale.”

This reversal can be seen in the figure, which shows the long-term trend (1975-99) with mortality improvement running at an average 1.4% per year. Mortality improvement then accelerates (the death rate falls by more each year) from 2000-11, but then declines sharply over the past four years.

“Mortality each year fluctuates depending on flu epidemics and how cold it is,” says Gordon. “Normally, however, after week 15, the excess deaths tail off, but in 2015 they continued to rise, which is a long way from what we were expecting.” Detailed analysis of the root causes is not yet available, but Gordon says: “What used to be a strong trend in mortality improvement rates is not as stable as we thought.” 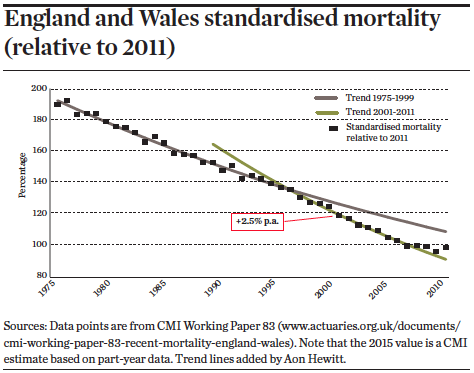 The accuracy of mortality improvement calculations is crucial for DB pension funds, because a relatively small difference in estimates can result in big changes in funding ratios.

“Longevity assumptions affect many aspects of the day-to-day management of pension schemes, from estimates of liabilities at a triennial valuation through to using valuation cashflows to set LDI-like strategies and modifying benefit structures,” noted Jackie Wells, head of policy and research at the Pensions & Lifetime Savings Assocation (PLSA) when it published research on longevity in late 2014. “Ultimately, the decision that pension schemes make on the removal of risk is highly dependent on their view of how longevity will change in the future.”

It should be noted, however, that current academic research is even more confusing, with two leading academics disagreeing radically in their views on human longevity in the very long term. S. Jay Olshansky, professor in the School of Public Health at the University of Illinois at Chicago, believes there is an upper limit to longevity and that life expectancy could level off or even decline in the next few decades because of obesity or infectious diseases. Meanwhile James Vaupel, founding director of the Max Planck Institute for Demographic Research in Germany, believes that life expectancy is likely to increase rapidly well beyond its current level.

Nevertheless, the breakdown of consensus on mortality can be attributed partly to the forecasting techniques and procedures used, says Roy. “The mistake over all age bands is that the longevity forecasters and researchers have treated the population as homogenous,” he says. “Furthermore, they did not include enough factors to explain increases in life expectancy.”

A commonly-used model for forecasting longevity data is the age period cohort model, based on three factors: age, period effects, and cohort succession. “However, other factors such as income, education and professional status, and even medical advances, diet and lifestyle need to be included, in order to arrive at a sufficiently accurate analysis,” says Roy.

He suggests that a combination of different forecasting methods and more detailed micro data should be used to improve these forecasts, citing Steve Haberman, actuarial mathematics professor at Cass Business School.

The default assumption of homogeneity adopted by researchers has also been challenged by the PLSA – formerly the NAPF – and Club Vita, providers of longevity services to UK occupational pension schemes.

Their research – The NAPF Longevity Model – showed that longevity trends experienced by DB scheme members are different from those experienced by the population of England and Wales, the basis for most longevity projections.

Secondly, the pace of increases in longevity varies significantly among different DB schemes and for different groups of DB pension scheme members within the same scheme.

For example, ‘hard-pressed’ male DB pensioners with lower levels of retirement income, living in more deprived areas, saw their life expectancy at 65 increase by 2.5 years between 2000 and 2010. This would lead to an expected 2% increase in pension fund liabilities for that group, compared with prevailing pension scheme estimates of life expectancy increases.

In contrast, ‘comfortable’ male pensioners on higher levels of retirement income saw increases of only 1.9 years, leading to a 0.5% increase in liabilities compared with prevailing estimates.

A similar picture emerges for female DB pensioners, with life expectancy for the ‘hard-pressed’ group increasing by 2.0 years, compared with 1.6 years for the ‘making do’ group on modest levels of retirement income, living in areas of average to low deprivation and the ‘comfortable’.

Gordon sees 2015’s developments in UK mortality as a blip. “Even if mortality improvements fall back, it would be shocking if mortality rates don’t improve in the next few years,” he says.

Established ways for pension funds to protect themselves against improving mortality rates – mainly bulk annuities and longevity swaps – will also protect against uncertainties in improvement rates.

Roy highlights the response of the investment industry: “It is increasingly important for fund managers investing on behalf of pension plans to develop long-term strategies as the short-term themes which often dominate the narrative can be inconsistent with the long-term nature of investment objectives,” he says.