The fund manager reviewed DB schemes attached to the UK’s largest 350 listed companies and found that smaller schemes – those with less than £500m (€557m) in assets – tended to experience more volatility regarding their funding position.

Schemes with less than £100m had a funding level on average 15% lower than those with £5bn or more, GSAM reported.

The group said the data reflected small schemes “have not managed their risk exposures as effectively as larger schemes, likely due to a lower degree of governance”.

David Curtis, head of UK and Irish institutional business at GSAM, said: “While the funding rate of smaller pension schemes improved this year, we see much greater volatility in their funding position than larger schemes who have consistently improved their funding level every year of the four years we have run our FTSE 350 study in the UK.

Although limited to FTSE 350 companies, the study had implications across the UK’s pension system GSAM said, as roughly 87% of private sector schemes had less than £500m in assets.

Overall, UK schemes have experienced a positive year in terms of aggregate funding positions. Multiple estimates have reported that assets have grown faster than liabilities during 2018, with FTSE 100-listed companies hitting 100% funding for their DB schemes earlier this year.

“In the next year alone, schemes are likely going to have to navigate higher interest rates in some markets, continued conflicts around trade, Italian budget negotiations and other macroeconomic risks that come with being in the late stages of the economic cycle,” he said.

“UK schemes in particular will be faced with their own challenges including the outcome of Brexit, potentially increasing interest rates and a volatile currency. In this environment, we think an enhanced focus on risk mitigation and a dynamic approach to asset allocation will prove invaluable.” 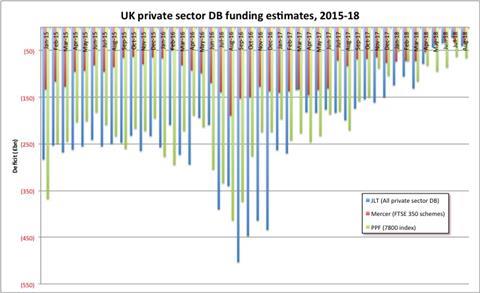