1
Briefing: Hybrids come into their own
Current edition

Back in the days when sailors relied on sails, they used to dread the doldrums – that zone near the equator where trade winds converge, generating windless weather.

● Plain vanilla convertibles do well in recessions, because they are boosted by volatile markets
● Additional tier-1 cocos have been resilient because banks have strong balance sheets

Investors in convertible bonds, the most common type of hybrid security that combines characteristics of bonds and equities, can probably identify with the predicament.

By the end of 2011, stock markets had settled down from credit-crunch highs, and remained strikingly becalmed for most of the next nine years. This presented a problem. “Convertibles tend to like volatile environments, and this is one reason why they have suffered for four or five years,” says Skander Chabbi, convertible bond manager at BNP Paribas Asset Management in Paris. “But the situation has drastically changed since Covid-19. This has shown again the resilience of convertibles in a difficult environment.”

The lack of volatility before Covid-19 was bad for convertibles because they are hybrid instruments – bonds but with the option to convert them into a predetermined number of shares. However, conversion is unattractive unless the share price hits a high level. Otherwise, they remain more valuable as bonds, which pay a coupon and can be redeemed at par on maturity. High volatility increases the chance that the underlying stock price will hit a high level, making securities more attractive as equities than as bonds. For this reason, pricing convertibles has much in common with pricing an options contract.

But all this changed suddenly when the coronavirus hit financial markets, sending volatility spiking. The Vix index, which measures expected volatility in US stocks, rose to its highest level since 2008. Convertibles suddenly looked good when compared with bonds, because of their optionality. But they also compared well with equities, because they were bonds too. Maturities are generally short: the average duration of convertibles funds is about two-and-a-half or three years.

Because of the new turbulence, the market suddenly seemed attractive. “The convertible bond market has not disappointed,” says Arnaud Brillois, lead portfolio manager on the global convertibles team at Lazard Asset Management in New York.

When the MSCI All Country World index was down 29%, in the dark days of March before policymakers triggered a rebound, benchmark global convertible bond indices were down only 9%, Brillois says. By early May, the MSCI was still down 11.5% since the beginning of the year in euro terms, and the Bloomberg Barclays Global High Yield Corporate index was 6.3% lower. But the Thomson Reuters Convertible Global Focus index was down by only a smidgen, at 0.3%. The Lazard Global Convertible fund did still better; it was 1.4% up on the year, in euro terms. Most convertibles are speculative grade, if rated. 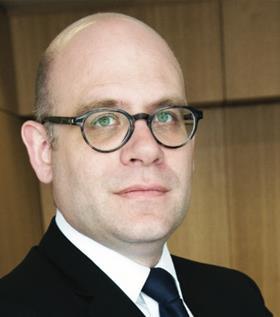 “The convertible bond market has not disappointed” - Arnaud Brillois

Convertible bond investors reduce their equity weighting by buying more convertibles that are far ‘out of the money’. This is when the stock price is not high enough, so the convertibles are worth more as bonds than they would be if converted into shares. They increase their equity weighting by buying more convertibles that are close to being ‘in the money’ or have reached that point. They will be worth more if converted into shares. However, convertible bond fund managers rarely actually convert before the maturity date, because a convertible that gives the holder the freedom either to hold a bond or to convert to equity is worth more than the share on its own.

However, the arrival of volatile markets cannot, in itself, quite explain why convertibles have done just so well this time round. Back in 2008, convertibles had a less torrid time than equities – but they were still troubled. They were down about 25% at one point, when stocks were 35 or 40% lower, recalls Brillois. However, he says convertible bond funds have a particular advantage in the 2020 downturn. They are heavily weighted towards companies in growth sectors, such as cloud computing, cyber security and online retail, which value coupons lower than for high-yield bonds; one of the Lazard fund’s biggest holdings is US cloud computing company Akamai Technology. Stocks in these growth sectors have defied historical precedent by performing well during this downturn, because lockdown and social distancing have made the world more digital.

As well as plain vanilla convertibles, more exotic types exist. Most are relatively rare, but Europe has a large market in additional tier-1 cocos (AT1s) – bonds that are converted into shares or written off should the bank’s common equity tier-1 ratio fall below a certain level. 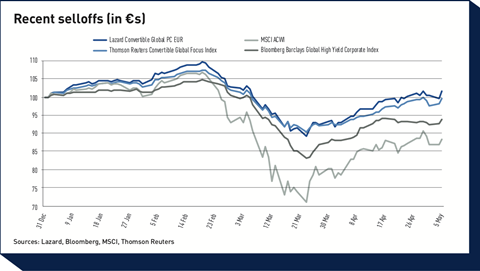 AT1s fell sharply in March – the Markit iBoxx USD Contingent Convertible Liquid Developed Market AT1 (8/5% Issuer Cap) index was down 18% at one point. However, they then recovered, with the index 4.9% down year-to-date by early May.

“This crisis is unprecedented in severity, speed and synchronisation, but it’s not a bank crisis,” says Alexandra Van Gyseghem, head of investment-grade credit at Amundi in Paris. “In fact, the banks entered the crisis with very strong balance sheets.”

On top of this, she says that AT1s received a boost when in late March European banking regulators made a favourable ruling. Although they had just banned banks from paying dividends during the crisis to preserve liquidity, they decided to try to support the continued payment of AT1 coupons by reducing the capital threshold below which non-payment is automatically triggered. As a result, AT1s suddenly became a way for investors deprived of dividends to continue receiving income from banks – and at yields similar to high-yield bonds, averaging about 6%. “Today the AT1s of the strongest European banks are interesting investments for institutional investors,” concludes Van Gyseghem.

The more general trend towards dividend cuts and non-payments has made convertibles in general look more attractive, according to Chabbi of BNP Paribas Asset Management. “With companies like Shell cutting dividend payments, the income stream which investors can expect from equities has been drastically reduced,” he says. 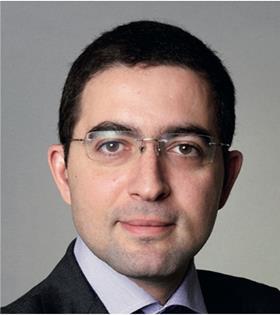 “Convertibles tend to like volatile environments, and this is one reason why they have suffered for four or five years. But the situation has drastically changed since COVID-19. This has shown again the resilience of con- vertibles in a difficult environment” - Skander Chabbi

Moreover, since coupons are fixed, interest payments have not been reduced by recent central bank easing, although average yield, at about 4%, is quite low when compared with other high-yield bonds.

But in contrast to Van Gyseghem of Amundi, Julian Marks, London-based portfolio manager of Neuberger Berman’s Corporate Hybrid Bond fund, is sceptical about the security of cocos, because of their contingent nature. His fund, instead, invests in another niche within the hybrid market – long-dated and perpetual corporate hybrid securities issued by non-financial companies. These are subordinated to senior debt and management can defer (although not cancel) coupon payments without placing the issuer into default. However, if payments are deferred, dividends cannot be paid either.

“This crisis is unprecedented in severity, speed and synchronisation, but it’s not a bank crisis. In fact, the banks entered the crisis with very strong balance sheets” - Alexandra Van Gyseghem

For the Neuberger Berman Corporate Hybrid bond fund, as for the sector as a whole, Marks says: “We’re talking about major utilities and telecoms companies, mainly from northern European triple-A and double-A countries – really well-regulated companies, with very good business risk, providing essential goods and services in advanced economies.” National Grid is the biggest holding. The fund currently has a yield to call of 4.5% in pounds sterling.

Because of these characteristics, the ICE European hybrid non-financial benchmark sector dropped by only 9% this year, before recovering to 5% down year-to-date in early May.