Two fundamental factors drive economic growth: population expansion and productivity increases. Everything else is essentially a by-product of one or both of these. In looking at these two factors, it is clear that interest rates and inflation will remain low well beyond current expectations.

With a shrinking population in virtually every corner of the world, it will be exceedingly difficult to generate respectable economic growth over the long term. Long term, in this respect, means at least until the mid-2020s (in the US) and much longer in some parts of the world, in particular in Europe.

Dwindling populations are only half the story; the ratio of working people and old-age pensioners is the other half. Retirees are no longer involved in production. Instead, they become a liability on economic growth. Germany and southern Europe (excluding France) are often accused of having the worst ratio between working-age and old-age people. However, without in any way trying to disguise the fact that many countries in western Europe face a serious problem, it is noteworthy that eastern Europe and parts of Asia are even worse off.

Productivity. This is the more complex component. The critical nature of productivity enhancements, at least as far as economic growth is concerned, is often underestimated.

With only modest changes to the age composition of society – which is what the world, excluding Japan, has experienced in recent decades – productivity improvements have proved by far the most important source of economic growth. 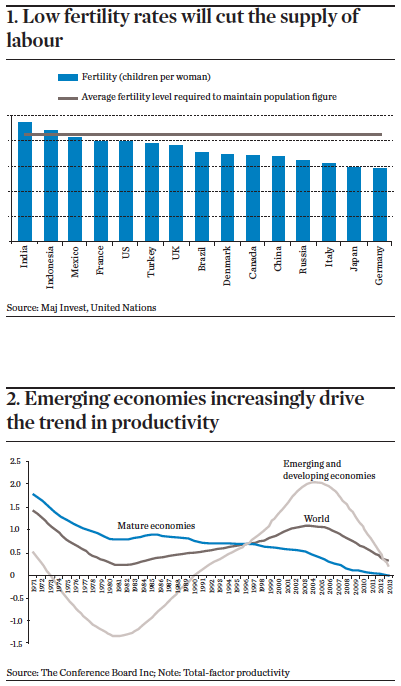 On average, Europe is less productive than the US. Labour productivity in the euro-zone, measured as output per hour worked (in dollars), was only 77% of the US level in 2013, leaving a gap of almost 25% in productivity between Europe and the US.

“The critical nature of productivity enhancements, at least as far as economic growth is concerned, is often underestimated”

US total-factor productivity grew at about 1.75% a year from the mid-1990s to 2004. Growth since 2005 has only been about half that level and was negative in 2014. European productivity has been virtually unchanged in recent years, leaving emerging markets to increasingly drive the trend in global productivity (figure 2).

Productivity is much more than having the swiftest possible broadband connection or the latest – and fastest – Intel chip in your desktop computer. Western Europeans are not exactly behind Americans when it comes to the use of technology but why are they so far behind when it comes to productivity enhancements?

“With an ageing work force all over the developed world, one would have to be extraordinarily optimistic (or simply naïve) to expect productivity gains in mature economies to bounce back to the levels of yesteryear”

There is nothing wrong with a reasonable quantity of rules and regulations but they come at the expense of economic growth – and therefore also jobs. This is going to be a major challenge for Europe, with economic growth already hampered by the rapid growth of the elderly population.

Other factors affecting productivity are as varied as: average age of the labour force; freedom of trade; competition; educational attainment; R&D spending; the price and availability of energy; urbanisation and the size of the financial sector. This latter may surprise you; researchers have found a strong link between the size of the financial sector and productivity, meaning bigger is better. It is also worth noting that there is a myriad of motivational factors that have an effect on productivity, which are far less quantifiable.

Take urbanisation. As more people move from rural to urban areas, the supply of qualified labour in a modern economy will increase, at least over time, improving productivity and therefore also economic growth. This is obviously a much bigger factor in rural economies such as India or China than it is in a mature, industrialised economy, but it works everywhere.

Looking to the future, with an ageing work force all over the developed world, one would have to be extraordinarily optimistic (or simply naïve) to expect productivity gains in mature economies to bounce back to the levels of yesteryear. It is therefore highly unlikely that productivity gains can make up for the losses in economic growth as a result of the very unfortunate demographics on our doorsteps.

Relatively low economic growth across the advanced economies is therefore not only likely, it is virtually set in stone. Some countries will be hit harder than others but all will suffer. This is likely to keep inflation at quite modest levels and interest rates comparatively low for a long time to come.

Niels Jensen is the CIO at Absolute Return Partners