Last year, the IFRS Interpretations Committee (IFRS IC) received a question about how they should attribute benefits linked to periods of service under a defined benefit (DB) promise when applying International Accounting Standard 19, Employee Benefits (IAS 19).

• The IFRS has defined a third way

• French sponsors fear disruption, but may not need to restate accounts

The promise involves the payment of a lump sum on retirement made up of one month’s salary for each year of service to employees. There is, however, a catch: the service has to take place over 16 consecutive years up to retirement.

So, considering paragraphs 70 to 74 of IAS 19, should sponsors attribute benefits:

• View A: from the date the employee starts working for the sponsor until they retire, irrespective of whether this exceeds 16 years or not;

• View B: to just the first 16 years of service or from the date the employee enters the sponsor’s employment if it will be less than 16 years; or

• View C: to only the last 16 years of service or from the date the employee enters the sponsor’s employment if their service will be less than 16 years.

The submitter, staff explained in their meeting paper, had considered View A and View B. Nonetheless, the staff added View C, as they put it, ‘for completeness’. So, with the facts established, they then set about consulting. This outreach revealed that these pension promises are commonplace in France, and not unheard of in Greece and Austria.

It also found that French sponsors tend to apply View A, in Austria and Greece they combine Views A and B, although one consultee thought that Greek practice coalesces around either View B or View C. It is fair to say that there is some diversity.

The committee finally explored the issue during its December 2020 meeting. Guy Jones, a committee member from Canada, gave a comprehensive summary of the various accounting treatments and the rationale behind them. “I agree with the technical analysis in the paper,” he began, “and I can certainly understand why .… someone might be more comfortable with the result of a View A or a View B given that it leads to an earlier higher accrual and, at least in the View A-type approach, a more consistent accrual over the entire service life of the particular employee.”

He continued: “And so I can understand intuitively why that might strike somebody as the accounting answer. And I could see someone sort of emphasising certain aspects of paragraph 70 to 74 to help rationalise that outcome.

“However, I think the technical analysis that focuses on paragraph 70(a) about commencing when service first leads to benefits under the plan, the pointing to the sentence in paragraph 71 that says you attribute benefits to periods in which the obligation to provide post-employment benefits arise, and then the discussion in paragraph 72 that is quite clear as to… when that obligation arises. I think, together, at least in my mind, [it] is quite persuasive as to what the proper technical analysis is here.

“So, I think there are schemes out there that are similar to this arrangement, where entities have not necessarily applied View C – they’ve been more in a View A-type thought process for more of the sort of intuitive-type reasons I described earlier – but, having said that, I think the proper technical analysis is as has been laid out in the paper. So I am in agreement with where the staff has landed on this.”

So what did the committee conclude? Essentially, they thought that an entity should attribute retirement benefits to each year of employment from the age of 46 to 62. Where the employee takes up their employment on or after the age of 46, attribution starts from day one. Crucial to understanding the subsequent feedback on the decision is the observation that this decision “aligns with the outcome set out in Example 2 illustrating paragraph 73, which is part of IAS 19”. 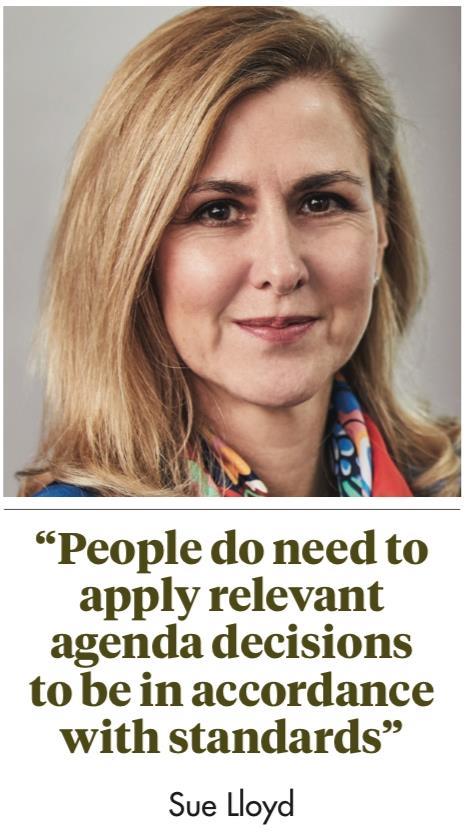 Unsurprisingly, the findings drew comments from both Greece and France. Athens-based Prudential Actuaries noted that this issue has been the subject of a year-long debate in Greece. The letter’s author then warned that Greek employment law means that employees might have an entitlement to a benefit from the date they start employment and not just within a limited timeframe from age 46. One such example is disability in service.

The letter concludes that an employee may become entitled to benefits from the start of their employment and that View B “should be considered as the ideal solution because it accumulates quickly the relevant fund reserve for facing the lump-sum benefit payment”.

Moreover, the comment from Autorité des Normes Comptables (ANC), France’s national accounting standard setter, makes the same case, arguing that “attributing retirement benefit from the date the employee starts working with the entity until the retirement date – regardless of whether that is longer than 16 years – is also an acceptable conclusion for the particular defined benefit plan as described in the submission.”

This in an echo of the Greek submission, is because “when the benefit is a direct consequence of the work contract as supplemented by relevant labour law, the employer incurs an obligation from the employment date onwards, even when the benefits only vest on the date of retirement – or to use the words of paragraph 70(a) of IAS 19, even if the benefits are ‘conditional on further service’.”

The justification for this accounting, as the ANC sees it, can be found in paragraph 72 of IAS 19. And what is more, attribution of benefits over the lifetime of an employee’s service, the ANC argues, would more faithfully represent the economics of the relationship. In short, it wants the IFRS IC to think again before its members finalise their agenda decision.

What the IFRS IC will eventually decide is unknown. But what we can be sure of is that if they come down on the side of View C as the most desirable treatment, DB scheme sponsors could face a period of disruption. But will they need to restate their accounts?

It appears unlikely. “First,” said the committee’s chair Sue Lloyd, “I think it’s going to depend on how similar people’s fact patterns are to what’s in the agenda decision – assuming it is final – because I think quite a few people have pointed out that it seems to be a very specific fact pattern.”

However, she added, “perhaps the more important generic point is that when we recently updated the Due Process Handbook, we made a specific reference there to the fact that people do need to apply relevant agenda decisions to be in accordance with standards.”

This, she reasoned, is because the IFRS IC’s agenda decisions provide new insights. And so, because it is new information – in other words something that preparers did not have in the past – they “typically” will not need to restate.