This month: more of the same

Asset allocation
The neutral vote across all regions and asset classes is close to 40%. This answers last month’s question, whether the sentiment is for good times ahead or a return to normality. Normality has been achieved, but sentiment keeps shifting. Political risk is forgotten. This may be delusional. The COVID-19 virus remains a threat, although new cases are receding, as there remains no cure. Japan stands to suffer, as a result of its dependency on trade with China. Also, the US elections are far from over, as the Democrat primaries continue: Buttigieg has done well, but Sanders is right on schedule.

In the US, Sanders is considered so ‘far left’ (to the amazement of Europeans), that his nomination would be a shock to US analysts and traders. Net equity sentiment figures have settled at around 25% everywhere except the EU, where it remains around 40%. Figures are lower this month, but the change is not significant for the moment. Bond sentiment is stable, but here also, the EU remains an outlier. This may be due to recurrent fear of deflation.

Country allocation
In all regions, equity market are expected to outperform bonds, but there are interesting regional differences. US net bond sentiment continues to drift down, albeit from a relatively high level. Perhaps doubts are creeping in about the Fed’s ability to control the economy on the downside, the ‘empty toolkit’ syndrome. The effect is a widening spread between equity and bond sentiment. The same is true for the EU, which is arguably more vulnerable to deflation.

In the UK, the last vestiges of Brexit are running out of the numbers. Remarkably, equity figures have returned to normal while Brexodus (companies partially or wholly leaving the UK) continues, for example, France is campaigning for the relocation of UK science-based services and industries to the larger Paris area. 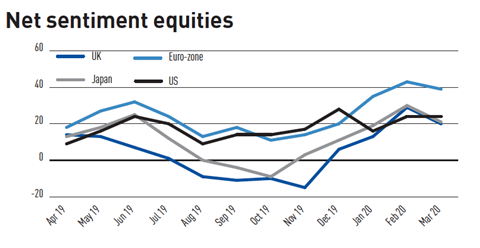