Using last month’s model of the statistics on daily new cases as an early indicator and daily case mortality as evidence of policy change, the 21 April situation looks like:

COVID-19
In the US, the case curve has flattened at a high level, but the death curve is rising. In the EU, cases and deaths are receding, except in Sweden. The UK shows flat cases and lower mortality. Japan is doing well at a low level. Curves seem to indicate an end to high-level deaths in the second half of May, though the assumption is shaky.

Politically, far right governments are more likely to withdraw crisis measures quickly. The question is if it is possible to be contaminated more than once. If so, opening up too soon has dire consequences. Economic support for the weakest is more likely to come from centrist governments, as rightist ones will prefer general stimulus measures, thereby worsening income distribution.

Asset allocation
The share of neutral sentiment is quickly dropping for equity, while staying put for bonds – but falling in Japan, indicating diminishing uncertainty that economic support measures will stimulate growth. That faith is also reflected in equities sentiment, which has converged globally to 40 to 42% net positive. Likewise, bond sentiment has converged to a -21 to -26% band, with Japan being an outlier. The dangers are a second wave of COVID-19, rising unemployment and social unrest.

In Japan, the positive vote for equities has doubled, while bond sentiment is down, a situation mimick- ing a boom. 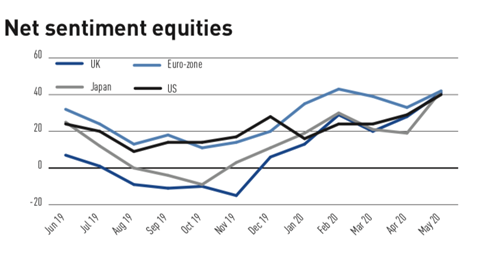