In Brazil, India and Japan, figures for new COVID-19 infections are low and descending. In the EU, they are low and rising, in particular in the former eastern bloc countries and areas. The US curve is going down fast from a high level. The statistics for Russia and in particular the UK are worrisome to bad. These two countries have relied on vector-based vaccines that are, on average, less effective.

The political risk of a COP26 failure is still high. The main threats are lack of funds and a row between the US and China that blocks agreement on anything important.

Asset allocation
Net equity sentiment is bunched around 55 in the EU, US and Japan. The UK is an outlier with 34. The statistics have been moving in a band, generally between 40 and 60, since the beginning of the year, with a stable to slightly rising neutral vote. Changing COVID-19 and political risk seems to have had little to no influence.

Net bond sentiment has set new record lows, with Japan following the general trend, but at a much higher level. Uncertainty is still going down. The combination is now so strong, one wonders if a rational portfolio still needs developed market government bonds, when returns after inflation tend to be negative and the outlook is negative as well.

Country allocation
As net equity sentiment is stable and net bond sentiment sinking ever deeper it is to be expected that the distance between the two series grows. However, it is growing smaller in the UK. One factor may be the EU-UK Trade and Cooperation Agreement taking effect in January, with accompanying fears of rising tension in Northern Ireland. Sentiment on UK equity is different enough to require further study.

Bond sentiment can only be described as extreme, except in Japan. Expectations are particularly low in the US, where 80% of the analysts expect bonds to fall. 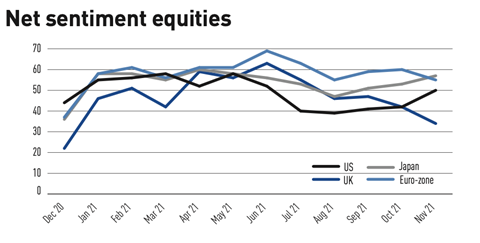 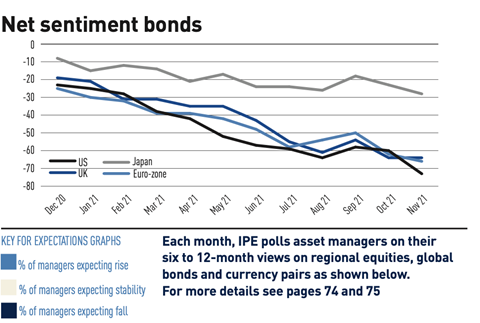