One way of understanding contemporary Japan is as a country haunted by the spectre of its rapidly ageing population. According to figures from the US Central Intelligence Agency the median age in the country is 47.9 years. That is significantly higher than some of countries with the oldest populations in Europe such as Italy (44.8 years) and Germany (46.5 years). At the other end of the demographic scale is Uganda with a median age of only 15.6 years.

Perhaps the most instructive comparison is with the US. At 37.8 years, its median age is a full decade younger than Japan’s. A deeper look into these statistics, reveals that the elderly dependency ratio in Japan – the ratio of the elderly to those of working age – is 43.3% in Japan, compared with 22.3% in the US.

Of course, demography is not necessarily destiny. In broad terms there are at least two ways in which Japan can counter negative demographic trends. First, it can increase the labour participation rate so that a higher proportion of those of working age actually work. Increasing the proportion of women in work is one way to pursue this goal. In the Japanese context, this goal has come to be known as ‘womenomics’. Allowing in more migrant workers would also bolster the working age population but Japan seems reluctant to follow this path.

Increasing economic growth is arguably even more important in countering the effects of an ageing population. A highly productive economy is better able to support dependants than one with poorer productivity. Indeed, that is precisely the main way developed economies have dealt with ageing populations in the past.

It is important to remember that demographic ageing is not new. It was apparent in many western societies throughout the twentieth century. But rapid economic growth – including the sort enjoyed by Japan until the late twentieth century – meant that living standards could still rise.

Anyone who has followed Japan in recent years is likely to recognise this preoccupation with ageing as helping to provide the context for Japanese economic policy in recent years. Paul Sheard, the chief global economist at Standard & Poor’s Ratings Services and a long-standing expert on Japan, says: “The whole Abenomics agenda has been driven by mounting concern about how Japan is going to pay for its pensions.” His reference is to the set of economic policies pursued by prime minister Shinzo Abe since coming into office in December 2012. From early on he fashioned the areas into three ‘arrows’: monetary stimulus; fiscal policy; and structural reform. 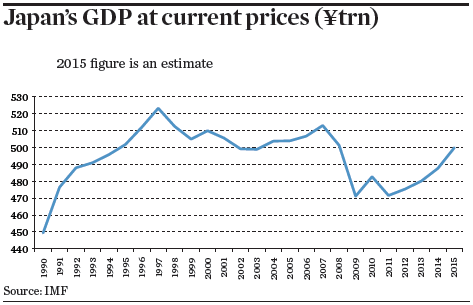 Each of these was designed to kickstart a Japanese economy that has suffered from over two decades of atrophy. According to figures from the International Monetary Fund (IMF) its GDP at current prices (that is not adjusted for inflation) was lower last year than it was in 1995. Only those who are at least middle-aged, or have studied economic history, are likely to know that from 1950s until about 1990 Japan was regarded as one of the world’s star economic performers.

In September 2015 the prime minister announced a new set of measures to supplement the original ones, with the explicit aim of bolstering GDP. They included child-rearing assistance to help increase the birth rate and increased nursing facilities for the elderly.

In the short term, Abenomics, and particularly the monetary stimulus, has provided a boon for Japanese investors. The Nikkei 225 stock market index has doubled from about 10,000 when Abe came into office to about 20,000. At the same time, the weakening yen has benefitted those who have invested abroad as they have enjoyed the added impetus of a currency uplift.

David Semaya, chairman of Nikko Asset Management, says private pension plans have been among the beneficiaries in recent years. “Abenomics has been extremely beneficial to them,” he says. “As the yen has weakened, their overseas assets have appreciated dramatically and that has coincided with very strong equity markets outside of Japan for the most part, as well as strengthened fixed income. In addition, the domestic Japanese equity market has done well.”

The tricky question, of course, is whether Japan can bolster its economic growth rate over the longer term. Anyone who has followed Japan for any length of time will know that there have been numerous false dawns before. Several previous growth spurts have ended in disappointment.

From Shiozumi’s perspective it is essential that Japan continues its shift towards an economic structure more appropriate to its demographic profile. “People should realise Japan is no longer an export or manufacturing-oriented economy,” he says. “Japan’s mid and long-term economic growth depends on consumer spending and the creation of new industries, particularly in the medical and healthcare sectors.”

In contrast, Sheard, talking from an economist’s perspective, emphasises the importance of anchoring inflation expectations. If consumers expect prices to fall, they have an incentive to defer spending. Why buy something today that is likely to be cheaper tomorrow?

Sheard is an admirer of Haruhiko Kuroda, the Bank of Japan governor since the early days of Abenomics, for determinedly pursuing monetary expansion. The problem Kuroda has had to tackle, at least in Sheard’s view, is a legacy of deflation that goes back 15-20 years. In particular, the current governor’s immediate predecessor, Masaaki Shirakawa, was an avowed monetary hawk.

“The Bank of Japan [under Kuroda] started this process with a very big credibility deficit,” says Sheard. “And credibility is the biggest ingredient here.”

Sheard argues that in relation to fiscal policy the government made a big mistake in hiking the consumption tax in April 2014. This hit Japanese consumers just when they were supposed to be benefiting from the effects of monetary expansion. Nevertheless, it is easy to see why the government is concerned about its fiscal balance. The ratio of government debt to GDP, at 245%, is one of the highest in the world.

The final element of Abenomics, structural reform, includes a mixed bag of measures including agricultural reform and promoting innovation. But perhaps one of the most important from both an economic and an investment perspective is corporate governance. Japan has steadily moved towards a more American style of corporate governance including corporate boards, external non-executive directors and share buybacks.

In relation to the governance of pension funds in particular, the Japanese have advantages that may make them the envy of their peers in Europe and the US. “In difficult times, some of the Japanese pension plans have been able to reduce benefits to existing pensioners”, says Nikko’s Semaya. “That’s virtually unheard of in the West.”

Such loyalty to previous employers has no doubt benefited some pension funds but it is likely to have limits. Japan will need more than a spirit of self-sacrifice if it is to succeed in kickstarting the durable economic growth that it needs.