Smart beta bonds: Not so fast

Smart beta fixed-income products are hard to come by despite a host of product launches in the aftermath of the 2008 financial crisis.

eVestment, the institutional investment data provider, only lists nine unique ‘smart beta’ or ‘enhanced index’ strategies, even though its dataset includes over 36,000 traditional strategies and more than 28,000 alternative ones. Although the number does not accurately represent the availability of fixed-income smart beta strategies, it gives a rough idea of how small the sector is compared with the overall fixed-income market.

It is not hard to see why, so far at least, smart beta has failed to gain recognition in the fixed-income world. While a growing body of evidence shows that it is possible to build ‘smart’ equity indices that outperform traditional market capitalisation-weighted indices, the same cannot be said for fixed income. So far, practical applications have yielded unconvincing results.

Niall O’Leary, head of EMEA portfolio specialists at State Street Global Advisors (SSGA), says the lack of evidence is a concern. “What makes equity smart beta so compelling is that it has been researched for generations. In fixed income we don’t have the same academic foundation to fall back on and, understandably, there will be a healthy level of scepticism. It falls on us as managers to write research.”

Koen van de Maele, head of financial engineering at Candriam Investors Group, does not see the lack of data as the main hurdle to building index strategies in fixed income. “There are strategies that, on paper, work very well, but they do not work in reality because of transaction costs and liquidity,” he says.

Historical lack of liquidity in fixed income is clearly a reason why indices that require frequent rebalancing are not viable.

But there are at least three other reasons why research on this issue has been limited. First, fixed-income indices have not been around for long. The first appeared less than two decades ago. This makes results of back testing problematic, as the breadth of data is limited.

Second, over the same period, fixed-income markets have performed extremely well, partly thanks to market distortions such as unprecedented central bank activity. This meant that both active and passive strategies have been rewarded well, making alternative approaches less appealing.

The third, most important reason for the lack of evidence that fixed-income smart beta indices work lies in the nature of fixed income itself.

Equity smart beta indices essentially exploit well-documented factors such as value, growth, quality and momentum. But it is more difficult to find evidence for similar factors in fixed income.

While in equities it can be argued that the equity-risk premia is the only source of market beta, in fixed-income markets several risk premia are at play, including term, credit and liquidity. These multiple risk premia in a sense take precedence over factors, almost overshadowing them.

• The availability of fixed income smart beta indices is limited.
• So far researchers have struggled to find strong evidence for factors in fixed income markets.
• Managers have used heuristic techniques to build indices with mixed results.
• Indices with a quality and value tilt tend to outperform but only in the long term.

Kate Hollis, senior investment consultant at Towers Watson, explains that the interaction between prices, coupons and maturities means analysing the behaviour of securities is much harder. She says: “Building smart beta indices in fixed income is a different game, as you are working on multiple dimensions.”

Nevertheless, Towers Watson has worked on smart beta indices since 2009 and Hollis is convinced that reliable ways of building outperforming fixed-income indices can be found.

The starting point of any conversation about smart beta in fixed income is that market capitalisation-weighted indices are tilted to the most indebted issuers, so a purely market-cap approach is undesirable. Passive exposure to the most indebted issuers is seen as a significant drawback since those issuers are thought to be the riskiest ones, as they are constrained in their ability to repay debt in issuance or issue more debt.

Many attempts have been made to build indices that isolate high-quality issuers. For sovereigns, indices have been built using combinations of different metrics, from debt to GDP ratio, to measures of fiscal strength. Smart beta credit indices have focused on ‘quality’ measures, trying to capture the ability of a company to repay its debt.

In sovereigns, Towers Watson focuses on fiscal strength while, for corporate bonds, the company’s screened credit approach uses quantitative models to pick the weakest issuers.  This involves using reliable credit analysis metrics extracted from companies’ balance sheets and annual reports. The weakest credits are taken out the index, which is then rebalanced to ensure the portfolio is well diversified. “The resulting portfolio is index-like in its natural exposures, with slightly less idiosyncratic risk”, says Hollis.

Felix Goltz, head of applied research at the EDHEC-Risk Institute, says: “Some strategies tend to privilege economic fundamentals rather than interest rate and credit risk. There seems to be story-telling around fundamentals, while there is no evidence that markets take them into account on a consistent basis.”

The results have, indeed, been mixed. Hollis says: “Sovereign strategies focusing on fiscal strength ought to work, but they have some flaws. The market is quite capable of ignoring an issuer’s fiscal strength for decades on end. The strategy has worked in some cases and not worked in others.”

Common sense would suggest that in some cases the most indebted issuers are not necessarily the riskiest ones, and history proves it. In the sovereign sector, Japan has been the most indebted country for many years, but its bonds have performed well nonetheless. Hollis admits: “Some fund managers have been underweight Japan for many years because of its high debt-to-GDP ratio, and it did not do them any favours.”

However, strategies founded in issuer quality may outperform over the long term. “If you are underweight the weak countries, the assumption with fiscal strength is that, sooner or later, those chickens will come home to roost, in which case then the strategy will add value,” she says.

SSGA takes a slightly different view on both asset classes. The company has worked on smart beta since the 2008 financial crisis, launching several sovereign bond and credit indices in partnership with index providers.

First, O’Leary makes the case that sovereign debt smart beta indices should not rely only on fundamentals, as they will tend to be underweight countries that provide a premium for too long. The solution is using a volatility trigger: “We see relative yield volatility as a warning sign that the market is realising that the fundamentals don’t stack up.”

In the credit sector, O’Leary accepts that factors exist, but adds that the right way of adding value is by combining them. “Our research shows that there are ways to exploit quality and value in credit markets in a systematic, rule-based and transparent framework,” he says.

The key, according to O’Leary, is tilting indices towards lower-quality issuers, provided that value is consistent within the index. “There is no point in tilting towards just quality, because if the market is mispriced, you can either win or lose. You have to have a multi-factor approach. Because there is a bigger premium for credit deeper into the market, it’s more rewarding to implement a smart beta strategy there.” 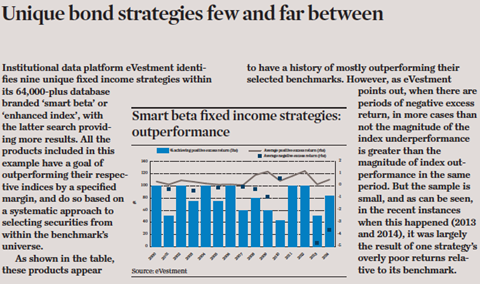 Van de Maele at Candriam takes the view that risk factors, including momentum, carry and valuation are indeed available, but that they are more efficiently combined in multi-asset portfolios comprising sovereign bonds and currencies as well as equities.

The other key point, he adds, is not to start with a benchmark. “If you start with a benchmark, you might end up with duration that you don’t like. You should start a bond portfolio with a blank sheet of paper and focus on a total return approach, using the three drivers of fixed income – credit, rates and currencies.”

There is a consensus, however, that smart beta in fixed income has to be a long-term strategy. Because the large bid-offer spreads of fixed-income markets can have an impact on returns, the first-order priority for index strategies is minimising turnover which, in turn, means waiting longer before returns can be realised.

The success of smart beta fixed-income strategies, therefore, also depends on price transparency and the reliability of transaction-cost models, both of which have been limited historically.

The uncertainty over the strategy in fixed income does not stop asset managers from using the term smart beta to market their products, whether they are systematic active strategies or rules-based passive ones. The results for the end investor, however, may not be similar.