Few words are as visceral, and yet as ill-defined, as populism. It has become a catch-all phrase for the sense of malaise sweeping the world. A recalcitrant anger that has seen mainstream parties thrown on the political pyre, and for some, a harbinger of nativism and protectionism. It is both celebrated as a reaction to irresponsible capitalism and an unsympathetic elite, as well as despised as the mob mentality and vulgar rhetoric that gave us Brexit and a wave of anti-immigration fervour.

Thankfully, though, as some maintain, the worst of it is over. Populism peaked in 2016 with Brexit and the rise of Donald Trump. But it fizzled in 2017, as Brexit reunited Europe and disunited the UK; the Trump administration disintegrated into incompetence, ego and invective; and most emblematically, France’s President Emmanuel Macron beat fascism in France with a decisive presidential victory.

This was ‘peak populism’ – the notion that the anti-establishment fever sweeping the globe is over.

It is a comforting narrative. It is also wrong. Today, populism has evolved into ‘authoritarian populism’ as populations seek answers and redress in authority.

At its root sits human bias. The recent populism was driven by a loss of trust in the institutions of modern society, particularly as the financial crisis, geopolitics and social tensions came together to create uncertainty.

Uncertainty is anathema to humans. The human psyche is defined by its continuous battle to exert a sense of control over our environment and to reclaim islands of certainty from the turbulence that we inhabit.

Alongside, our temporal myopia means that actions and gratifications today carry more weight than tomorrow. While modern institutions may find solutions, they are also slow, with progress measured over decades. That is at odds with human nature, whose time horizon shrinks further in times of uncertainty, and demands immediate answers.

In this mix, those with unambiguous answers and a strong narrative – whether rooted in fact or not – are seductive. They leverage off our collective cognitive biases, promising certainty and quick fixes. They have answers and speak authoritatively, creating focal points that disparate discontents can coalesce around.

The term authoritarian populism first came to the fore in the 1980s to describe the conservative revival that put Margaret Thatcher and Ronald Reagan in power. Both married popular discontent with clear direction and a strong, often moral authority to deliver a winning electoral combination.

The ideologies may have evolved since then, but today, authoritarian populism is ascending once more. More worryingly, it is dismantling many of the key assumptions that underpin modern democracy and society, and by extension, the financial markets we invest in.

Unlike totalitarian responses to discontent, such as the rise of neo-Nazi or communist parties, the authoritarian camp is a broader church and thus more palatable to voters. 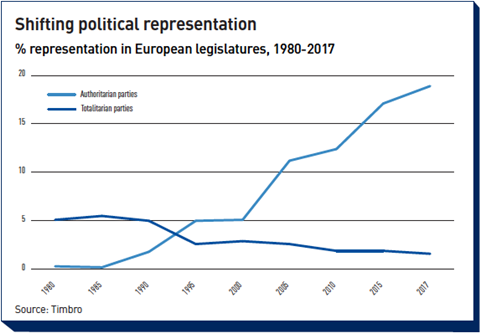 Its unifying principles are simple:

• An authoritarian populist represents the ‘people’ against an elite that has disenfranchised them.

• It is critical of multilateralism, and more focused on domestic priorities. Thus, it eschews and criticises the European Union, free trade, globalisation and international alliances.

• It wants direct democracy – a more direct rule by the ‘people’, which is often also married with a lack of patience with the current pace of law and due process.

• Ironically, it also wants a more powerful state to effect change. This may be strongly anti-immigration or protectionist measures for the right-wing, or nationalisation and higher taxation for the left-wing.

• There is always the implicit claim to moral authority, often in the form of righteous outrage.

Authoritarian populism is fundamentally different from totalitarianism. It may subvert democracy but it is also a product of it. Across Europe, for example, the percentage of seats held by parties that meet the criteria above has steadily risen, with no indication of a peak (see figure). The faith in totalitarian solutions may be falling, but voters are coalescing around an anti-elite message.

This is more than a protest vote. Today, 10 European governments – an all-time high – include an authoritarian populist party, and 2018 has seen a continuation of this trend. Meanwhile, globally, there are signs of authoritarian populism taking root, as populations turn to strong leaders who espouse national pride, protectionism and decisive action. Russia has Vladimir Putin, China has Xi Jinping, Turkey has Recep Tayyip Erdoğan and the US has Donald Trump. It is worth noting that all of these have sought refuge in rhetoric, ‘[insert name of country] First’ policies and a didactic form of government.

Even where there is moderation, it is married to an imbibing of populism by mainstream parties. In the UK, for example, Labour advocates nationalisation, while the Conservatives have absorbed the angst of the UK Independence Party into their ranks. Across the spectrum, all political parties talk with moral authority of companies paying their fair share and fair trade.

These same winds are corrosive to democracy. The ‘people’ that authoritarian populists represent are rarely inclusive, meaning that change is geared towards advantaging one tranche of society. That engenders more division, and a greater dissatisfaction with the rule of democracy as new dissatisfactions emerge.

Alongside the creation of a new breed of flagbearers there is a risk of moving into an era, akin to the 1920s and 1930s, where politics coalesces around charismatic leaders. These cults of personality are self-perpetuating and bring the uncertainty of mercurial temperament.

In doing so, institutions are weakened in favour of strong-willed individuals who promise to refashion. They may do so, but in achieving their goals, they weaken the institutions that led them to power. That, in turn, weakens many of the underpinnings of perceived economic prosperity and stability today, from global trade to innovation, to an inclusive dialogue of compromise.

Populism is far from dead. Investors would be unwise to ignore these global contours as they map out their future strategies.

Dr Bob Swarup is principal at Camdor Global Advisors. He can be contacted on swarup@camdorglobal.com