On 3 March 1719, George Heinrich de Görtz, Baron von Schlitz, was taken to the common gallows at Stockholm, Sweden. The sentence was death by decapitation, reserved for the most treasonous acts.

As a last act of magnanimity, Queen Eleonore allowed his plea for his body to be buried according to Christian custom rather than beneath the gallows. It was a departure from his trial where he was granted no legal counsel, no witnesses and no notes. As Görtz ascended the scaffold, his last words, it is said, were: “You bloodthirsty Swedes, take the head then that you craved for so long.”

Görtz’s crimes were unique. Indeed, they had been hastily invented just for him. He was accused of speculation, of driving a wedge between the king and the people, and of having “ruined public credit by imaginary money”.

The truth was more nuanced. Inheriting an ailing economy plagued by illiquidity and lacking credit in the aftermath of Charles XII’s expensive military forays against Russia, Görtz sought to reignite growth and finance the government’s growing appetite for spending (largely on wars) by issuing new paper money, government obligations and copper tokens intended to be repaid in better times.

Although successful initially in turning around things, the eventual outcome was to debase the currency in people’s eyes and unleash a wave of social discontent, which only grew as Görtz sought to artificially maintain their value and prevent a financial crisis through increasing monetary acrobatics and restrictions. Eventually, after Charles XII’s death in battle in 1718, Görtz was arrested and blamed for all the travails of preceding years, as his heirs sought to distance themselves from Charles XII’s unpopular policies.

It was not the first time that a central banker was blamed for the world’s ills but it is the only time where one paid the ultimate price for failure.

Today’s generation risks repeating Görtz’s folly, namely providing a focus for society’s ire and a convenient scapegoat for politicians today. At risk is not their heads this time, but as important, their independence.

The Age of Omniscience

The high inflation of the 1970s and 1980s underscored the need for monetary policy to be insulated from political and social pressures, as difficult and unpopular decisions had to be made to tackle the challenges of stagflation.

With their eyes on the shorter-term prize of the next opinion poll and the next election, politicians proved unable to look past their behavioural biases to the bigger picture. In contrast, the success of Paul Volcker, the chairman of the US Federal Reserve from 1979 to 1987, and his ilk in understanding and acting to contain the longer-term economic impact ushered in the golden age of central bankers.

The gilding on this age of omniscience was only enhanced by the great moderation and stellar economic growth of the subsequent three decades. Independence and the guidance of the wise on the mount became the mantra of the day. The argument went that an independent central bank free of political pressures could focus on monetary policies for the long term, targeting low and stable inflation, as well as long-term economic growth.

There is much that central banks have achieved of which they can justifiably by proud. But over the last decade and in the aftermath of the last financial crisis, we have also developed a worrying cult of personality. Central bankers have become all powerful, all knowing, all guiding. In doing so, they have created a dependency culture that is preventing diversity of thought and enfeebling the financial system.

Markets have, in the large part, acquiesced to their superior wisdom and are now driven by sentiment around policymakers. They are fed by monetary drip-feeds and their occasional spasms balmed by the soothing phrases of forward guidance. Asset prices today are determined less by earnings and more by continued monetary accommodativeness.

But trust is fragile and humans are not gods. Central bankers – for all their skills – cannot foresee or solve all the world’s ills, nor should they be expected to. Yet, by allowing and acquiescing to the myth that they can, they risk both their credibility and repeating Görtz’s folly.

Today, the edifice is showing cracks. Where quantitative easing once led, more taboo tactics are coming to the fore. The zero bound has gone, and negative rates are acceptable. Some even talk of the need to remove cash entirely. These are fewer signs of innovation and more of desperation, as policy threatens to tumble from the grasp of policymakers. Meanwhile, central banks globally are diverging as shock and awe has whimpered for many, and new localised uncertainties such as Brexit preoccupy.

This is not a judgment on the success or failure of central bank policies over the last decade. We are still too close to fully analyse and the results – for better or for worse – will not emerge fully for years yet. Until then, there are charged arguments on both sides.

But in one key aspect, it has been a colossal failure. Society has not felt a recovery and in its disenfranchisement, has turned iconoclast. Populism has risen significantly and politicians – ever sensitive to these nuances – are playing to the galleries increasingly, as elections evidence the frustration.

In this mix, monetary policy has lost its lustre and there is a growing sense that central bankers are unaccountable for their actions. In the UK, Prime Minister Theresa May has argued that savers are being hit hard by the low-interest-rate environment, while others such as Ed Balls, a former junior finance minister, have argued publicly for a new layer of oversight for the Bank of England. In the US, the former US Treasury Secretary Larry Summers has argued that central bank independence should be scrapped if demand is to be reignited, while politicians across the divide have criticised the Fed.

There is some truth in that, by failing to factor in the human element and appreciate the complexity of the whole socio-economic system (outside of their own narrow remit), central banks have provided a convenient excuse to their critics. They also fell prey to groupthink and their hype, showing their own behavioural biases.

But there is also disingenuity. Politicians have no longer had to make hard decisions in this age of omniscience. When trouble struck, one merely looked to the monetary lever to save the day. Structural reforms – always so courageous to consider and career-threatening to implement – could be put off to another day, and preferably after the next election.

Redistribution was never part of central bank policy. The very act of raising or lowering interest rates will always have unequal impacts across society. And extreme measures will have even more extreme impacts. But managing these, mitigating inequality and assuaging society is the preserve of politicians, not central banks. The latter by diktat is focused solely on inflation, monetary stability and unemployment.

But, like Görtz, central banks have failed to argue their case and many are still unaware of these shifting sands. They are on the defensive – for example, Bank of England Governor Mark Carney defending the Bank against accusations that central bank policies drove inequality.

The clock is ticking and there is a real danger that the next leg of the cycle will bring central bank independence under threat. As central banks ponder reversing out of the monetary cul-de-sac towards ‘normalisation’, their once-praised independence of thought may be a political and social liability.

One example is the Fed debating how to reduce the size of its balance sheet as growth returns and inflation picks up. Selling securities on the open market is not an option and it will, more likely, simply let some part of its existing securities mature over time without reinvesting the proceeds. That number over the next three years is nearly a trillion dollars. 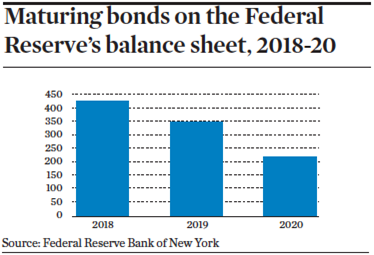 The refinancing of any part of the above will fall to either the private sector or foreign buyers. Yet this would be in an environment where the current US President wishes to reduce the current-account deficit, households are being asked to spend more, corporations are more interested in buybacks than Treasuries, foreign investors are reducing their holdings to deal with their own issues, and the budget deficit is likely to rise if fiscal easing take place. Coming on top of two or three perceived rate rises this year, this would be further tightening, a strengthening dollar, shrinking corporate margins, higher debt servicing costs and a brake on federal spending.

The stage is set for a clash of wills. Politicians are fighting to realign themselves with a more partisan public mood demanding short-term fixes. In that environment and without appreciating the lay of the land, central banks risk becoming today’s scapegoat. It is telling that in recent weeks, Capitol Hill in the US has fired warning shots across the bow of Janet Yellen, the chair of the Fed, while Wolfgang Schäuble, Germany’s finance minister, has sought to blame the European Central Bank for keeping the euro too low in the face of US criticism.

Should history rhyme, we will throw independence out with the bathwater and fix nothing. The result will be even more uncertainty and instability in the future.

This is an updated version of the article that appeared in the March 2017 issue of IPE.

Bob Swarup is principal at Camdor Global Advisors, a macroeconomic investment and risk advisory firm. He can be contacted on swarup@camdorglobal.com