Norway’s sovereign wealth fund has lost NOK1.3trn (€112bn) over the last few weeks in international currency terms, or 16.2% of its value, as its equities portfolio shrank by nearly a quarter because of the coronavirus crisis.

The Government Pension Fund Global (GPFG) is set to become a buyer of large amounts of equities as it works to rebalance the asset allocation of its portfolio, the head of the fund’s manager Norges Bank Investment Management (NBIM) told a news conference yesterday.

Yngve Slyngstad, chief executive officer of the central bank subsidiary, said: “These are unusual times in society, in the economy and on the world’s financial markets.”

He said the SWF’s total assets were worth NOK10.127trn on Wednesday, despite the significant fall that had happened in the world’s financial markets in the last few weeks.

This compares to the fund’s NOK10.088trn 2019 year-end value NBIM reported in February.

Addressing this paradox, he said: “The fact that the value is higher today is because the krone has weakened to a similar degree as the equities markets.”

The fund’s equity quota, which was on target at 70% at the end of last year, had fallen to just over 65%, he said.

“That means the fund is in a situation that will trigger a so-called rebalancing rule. This means that we will in the long-term buy shares in the global equity markets,” said Slyngstad.

Giving more information about this rebalancing rule, he said rebalancing action would be triggered if the fund deviated by more than 2% from the strategic equities allocation.

“The strategic share is 70% so if we are below 68% we will buy equities, but we say nothing about when and in which format,” he said, adding that the rule was complex and depended on how the market was moving.

Asked if it was a logical conclusion that the fund had therefore begun buying equities in the last few weeks, Slyngstad said it was not. “We will be buying, but whether we have started or not we cannot comment on,” he said. 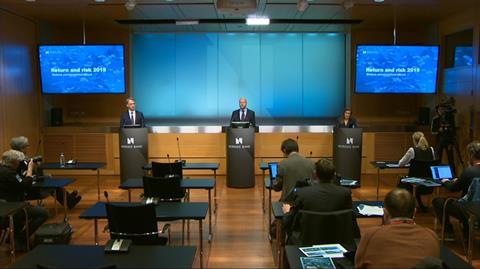 NBIM revealed that, measured in international currencies, the GPFG made a 16.17% loss overall in the year to 25 March

Measured in international currencies, the GPFG made a 16.17% loss overall in the year to 25 March, NBIM revealed.

“That means we had a loss in international currencies of NOK1.3trn,” Slyngstad said.

Equities suffered a 22.82% loss in the period of almost three months, but fixed income investments made only a very narrow loss of 0.06%. The fund’s other main asset class of unlisted real estate made a 0.4% loss, NBIM reported.

Describing the conditions NBIM had been battling over the last few weeks, Slyngstad, who is to step down in September, said the team experienced some individual days when the value of the fund changed by more than 10%.

“We had many days when it swung by four or five percent,” he said.

Even though such daily swings were less important for the fund in the long-term, he said NBIM was nevertheless in a new situation of market turbulence when the manager was following the market development and trying to analyse the risk in the market as well as it could.

“This will probably remain the case in the weeks and months to come,” Slyngstad said, adding: “It is therefore a challenging task for us all in the management of the fund.”

As a fund mainly invested in equities, the GPFG’s value would basically follow the development of stock markets from day to day, he said.

Showing graphs to compare the amount of days it took for the S&P500 to fall by 20% or 30% from its highest level during this recent crisis, and how long such falls had taken during previous crises, Slyngstad said: “This is a faster type of fall than we have ever seen before.”