Pension Protection Fund (PPF) – The Department for Work and Pensions (DWP) announced that Kate Jones will take up the post of  chair of the PPF’s board on 1 July, taking over from Arnold Wagner.

Jones has been a non-executive member of the PPF board since February 2016. Her career includes extensive experience of the UK asset management industry gained as an investor, senior business leader and board member across the financial services industry. She has held senior roles at JP Morgan, BlackRock, Schroders and M&G.

She is also an accomplished executive coach with a keen interest and focus on diversity and inclusion in the financial sector.

“I’m proud to have the opportunity to lead the PPF in the next important phase of its evolution as we look to our future challenges, while always ensuring we’re able to continue to offer the very best protection to those who rely on us”, said Jones on her new position.

Norwegian Pension Fund Association – The general secretary of Norway’s Pension Fund Association (Pensjonskasseforeningen) Espen Kløw has resigned from his position at his own request, and in agreement with the board, the industry group announced on Monday. Kløw is now looking for new opportunities, it said, adding that the employment relationship would come to an end on 31 December 2021.

The association said its legal director, Christer Drevsjø, has been appointed general secretary until a permanent leader is in place.

The association also said the board recognised Kløw’s efforts for the Pension Fund Association over a number of years, and that it had had a good collaboration with him, and a good dialogue about his departure.

Amy Kam has been appointed as senior portfolio manager, responsible for co-managing Aviva Investors emerging market (EM) corporate bond strategy, alongside Aaron Grehan, head of hard currency EMD. Kam has over a decade of experience of investing in EM corporate debt and previously worked at GAM as an investment manager.

Other recent hires in the EMD team include Nafez Zouk who joined as an EM sovereign analyst in a newly-created role. He has over 10 years of experience and will largely focus on sovereign issuers that are active in both local and hard currency markets. He previously worked for Oxford Economics as an EM strategist.

Aleksej Gren has also been appointed as an EM corporate analyst in another newly-created role. He will be responsible for the analysis of EM corporate debt issuers with a focus on the metals and mining, consumer, infrastructure and real estate sectors. Gren joined Aviva Investors in September 2020, having worked as a credit analyst for over eight years on both the buy and sell side.

Danish FSA – Martin Tvede Zachariasen, vice chancellor of Copenhagen’s IT University, has been appointed as a new member of the Danish Financial Supervisory Authority’s (Finanstilsynet) board. The FSA said the appointment would bolster its board skills in data analysis and cyber risks –  areas that it said were becoming increasingly relevant to its work.

Border to Coast Pensions Partnership – The UK pensions pool – with total assets of £55bn (€64.3bn) – has made a range of appointments as it continues to build on its existing capabilities.

The appointments follow a series of new fund launches at Border to Coast, including the £1.5bn Sterling Index Linked Bond fund and its £5bn Private Markets investment programme.

Richard Charlton joins as chief risk officer from Deloitte, where he has been a director within its UK consulting practice, providing risk advice to financial services firms. Prior to this he held senior roles in a variety of different roles within UK and global insurance companies, including Phoenix Group, Aviva and Canada Life.

Border to Coast is also expanding its investment team with the appointment of Lloyd Thomas, Lauren Madden-Queralt and George Kendall.

Thomas joins the team as a portfolio manager to oversee the pool’s externally managed fixed income funds. He has more than 12 years of experience of managing absolute return strategies at Insight Investment and at Mediolanum Asset Management.

Madden-Queralt is supporting Border to Coast’s private markets programme as operational due diligence manager. She joins from Oxford University Endowment Management where she was head of investment operations. She previously worked at Goldman Sachs and PKF, the accountancy firm.

Rachel Elwell, CEO at Border to Coast, said: “Despite of the impact of COVID-19, Border to Coast has continued to recruit as we remain focused on delivering a positive difference for our partner funds. During lockdown we have welcomed a quarter of our colleagues as we have tried to work as close as possible to business as usual.”

Deutscher Pensionsfonds (DPAG) – A joint venture between Deutsche Bank and Zurich Group Germany has appointed Mario Oberle, head of occupational pensions at Zurich, and Jens Wagener, chief life actuary at Zurich, as members of the management board.

Both Oberle and Wagener succeed Björn Bohnhoff, who will continue to serve as a board member at Zurich Group Germany, and Michael Canvas, who has left the company.

DPAG has also named as board member Thomas Huth, head of pension management at DWS International.

In his new role, Oberle will take over the responsibilities for the operational business division which combines administration, IT and product development. Wagener is new the chief financial officer, while Huth is responsible for sales.

Christophe Herpet has been appointed deputy head of fixed income and, also based in Paris, he will report to Le Morhedec.

They will both retain their current portfolio management responsibilities.

Stoter said: “The new organisation of our fixed income team enables us to better capture and answer client demand for truly global, conviction-led and ESG embedded fixed income capabilities. I am convinced that Marion’s indisputable leadership skills and deep expertise in fixed income, alongside Christophe’s robust experience in managing the AXA Group’s assets, will not only generate value for clients but also for our internal teams.”

Morhedec was previously head of active fixed income for Europe and Asia at AXA IM since 2019. Before this role she headed the Product Specialists and Solutions team first for the fixed income platform then for the Core Investments Business Unit, overseeing the business development plans, as well as the platform’s innovation efforts on solutions and product offering.

Herpet was previously global head of AXA Fixed Income and Buy & Maintain since 2019. He had joined the fixed income teams in 2010 and was responsible for managing fixed income mandates and mutual funds, sharing market ideas, and investment strategies with AXA Group.

Swiss Sustainable Finance (SSF) – The SSF has elected Patrieck Odier as its new president. Odier succeeds Jean-Daniel Gerber, who is retiring from his position after six years in office. 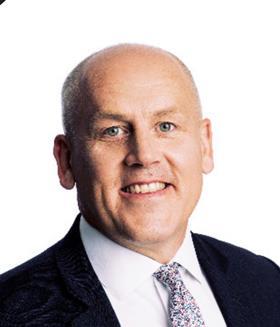 Candriam – David Morley has joined as head of UK distribution, reporting to Renato Guerriero, chief sales and distribution officer at Candriam. Based in London.

Morley will be responsible for leading and developing the firm’s UK distribution business across institutional, wholesale and retail markets supported by an existing team of four. He replaces Derek Brander who has decided to leave Candriam to pursue other opportunities.

Morley has an impressive track record and strong experience across UK institutional, wholesale and retail markets. Prior to joining Candriam, he was country head UK at Eaton Vance Investment Managers for six years. He also worked at Lombard Odier Investment Managers and at Henderson Global Investors, where he was director of institutional business for the UK for 10 years.

Hansson is also a member of the board of directors at AP1 and the chair of Barncancerfonden’s investment committee.

Turnbull has joined as a senior consultant in the DC retirement team, advising trustee and corporate clients on all aspects of workplace defined contribution pension provision. He has 20 years of experience in the pensions industry, the last 13 of which have focused on DC pensions consulting. He has worked at various benefit consultancies, most recently Barnett Waddingham, and is a fellow of the Pensions Management Institute.

Donaldson has joined from Hymans Robertson as a senior DC investment consultant. He will be working with key clients on all investment aspects of their DC pension provision, and especially on improving retirement outcomes for members. He is an actuary with more than 15 years of experience in pensions investment consulting, covering investment strategy, governance, and provider selection and monitoring.

RepRisk – The ESG data science firm has set up an academic advisory board comprised of five prominent research leaders in ESG dedicated to developing innovative thought leadership, bridging new theories and ideas in the academic space with RepRisk’s ESG dataset.

The academics on the board are:

Preqin –  Jaclyn Bouchard has been appointed head of environmental, social and governance (ESG) as the company – a provider of alternative assets data, tools and insights – looks to ramp up its efforts to provide quality ESG data at scale for private markets. She joins from S&P Global, where she worked for almost 10 years in various sustainability-related roles, most recently spearheading the development of S&P’s ESG products.