Switzerland’s most vulnerable pension fund has been offered a CHF4.7bn (€4.1bn) bailout from its sponsor, the canton of Geneva

• Geneva’s cantonal pension fund (CPEG) is Switzerland’s weakest with a 57.4% funding level.
• The canton of Geneva fund was well off course for hitting a legal 60% funding target by 2020.
• The canton has proposed recapitalising the fund with CHF4.7bn (€4.1bn), but it would be required to become a DC scheme.
• Trade unions are against the proposal as they see members being unduly punished.

Five years ago, Swiss public pension funds had to make a big decision, even if for most it was straightforward. Under federal law, they had to choose between being fully funded within 10 years, or 80% funded by 2052. The public sector guaranteed the difference between the effective funding ratio and full funding.

French-speaking cantonal pension funds have lower funding levels than their counterparts in the German part of the country, and have opted for partial funding. In central and eastern Switzerland, many were almost fully funded anyway and therefore opted to become fully funded.

Today, says Jérôme Cosandey, senior fellow at think tank Avenir Suisse, the focus is on whether pension funds are sticking to their chosen restructuring plan.

The main ‘hot spots’, he adds, are the pension funds for employees of the city of St Gallen, the canton of Geneva and the canton of Basel.

Of these, the Geneva fund – Caisse de Prévoyance de l’Etat de Genève (CPEG) – has the weakest funding position of all. As of December 2016, it had CHF11.9bn of assets but CHF20.7bn of liabilities, a 57.4% funding ratio.

CPEG is “fragile” despite being managed well, its general director Christophe Décor has told IPE.

In 2016, the pension fund’s investments gained 5.7%, outperforming the Credit Suisse pension fund index by 1.8% and CPEG notes that it has outperformed the index over the long term.

CPEG was created in 2014 from a merger of its two predecessor funds – CIA, for cantonal public service employees, and CEH, for hospital workers – as stipulated by 2013 cantonal legislation.

At the time of its creation, several measures were taken to reduce the structural deficit – both on the contribution and benefit side – and the canton provided it with CHF800m of capital. 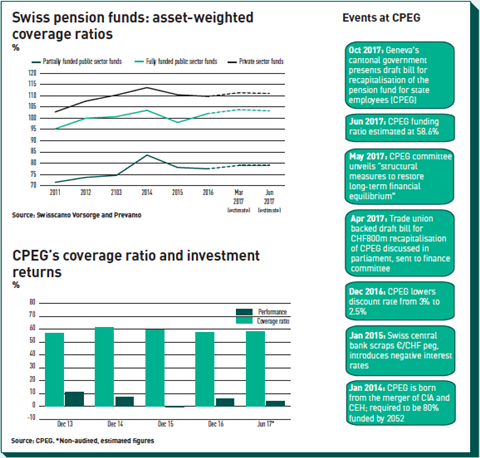 That followed the fund’s committee deciding to follow the recommendation of its adviser and lower the discount rate from 3% to 2.5% in December 2016. This added CHF1.45bn to the deficit.

At this stage it became clear that CPEG would not reach its 60% 2020 target without changes. So say both CPEG and the cantonal government.

The pension fund initiated a plan. Between December 2016 and this May, its committee worked on measures to restore its long-term financial equilibrium.

One of these is to increase the age from which members can take a full pension from 64 to 65. This will take effect on 1 January.

The committee also approved changes affecting benefits, but said it would only do this if they proved to be indispensable. The cumulative effect of these would be to lower pension benefits by 15%.

Whether or not the pension fund implements the remainder of the measures hinges on the outcome of a recovery package the cantonal government has proposed.

Funded in one fell swoop

A law setting out the rescue package was presented to the cantonal parliament in October.

It was keenly anticipated. The cantonal government had told parliament last December it would adopt a draft law modifying the law governing CPEG, and in April it had said the bill would pave the way for a substantial capitalisation of the pension fund. It had also indicated it would involve the pension fund switching from a defined benefit (DB) system to defined contribution (DC).

There are three main elements to the government’s proposal.

One is an immediate recapitalisation to take the pension fund’s funding ratio to 80%. The next is the switch to DC, and the third is the new contribution rate split between employer (58%) and employees (42%).

It is planned that the recapitalisation will comprise cash and assets, and a ‘simultaneous loan’.

This latter effectively involves the pension fund granting a loan to the canton for a sum to be determined, which the state will amortise in linear fashion over the next 40 years, and pay an interest rate equivalent to the discount rate, currently 2.5%.

A spokesperson for CPEG told IPE that such a recapitalisation would require the pension fund to carry out a new asset-liability management study, and review its strategic asset allocation.

In total, the envisaged capital injection would be CHF4.7bn and would bring CPEG’s funding ratio up to 80% in one fell swoop.

But a lump sum payment of the size proposed by the cantonal government would be unprecedented for cantonal pension funds, according to Avenir Suisse’s Cosandey.

As to the potential perceived effect on the canton’s creditworthiness, Standard & Poor’s had last year revised the outlook on its rating of Geneva from stable to negative because it had high unfunded pension liabilities, especially in CPEG. The rating agency said the liabilities represented 93% of the canton’s operating revenues at the end of 2015 and would probably remain sizeable in the coming years.

The rating agency’s next scheduled publication date for the canton is 3 November.

According to the cantonal government, the majority of CPEG’s committee is in favour of the draft bill while the supervisory authority, ASFIP, had given a preliminary positive opinion.

Some unions, however, are none too pleased with the government’s proposal.

Asked about his reaction to the draft bill, Marc Simeth, president of Cartel intersyndical, the umbrella group for 11 trade union associations in Geneva, told IPE that the association firmly rejected it.

“We will now put together a package of demands to present to the cabinet for negotiation and we will see it if its true agenda is to save the pension fund for the state employees or not,” he said. “At the same time we will start to mobilise staff.”

Cartel intersyndical has been pushing for an alternative approach to dealing with the funding problems.

It is encapsulated in a different draft law, which was presented to parliament in April, but is stuck in the finance committee, which created a sub-committee dedicated to study draft laws dealing with CPEG.

Draft law PL 12095, which the Cartel intersyndical favoured, proposed a recapitalisation of CHF800m and a 0.55% increase to employee contributions.

Cartel intersyndical’s thinking was that the CHF800m funding boost would take some pressure off the pension fund and buy time before the main part of the unions’ plan could kick in.

Developed with ASLOCA, a Swiss association for tenants, this part of the unions’ plan foresaw the canton transferring land that it owns to CPEG for the pension fund to build affordable rental housing on. In Simeth’s eyes, it was a “win-win”.

That option, however, seems to be off the cards, with attention instead focused on the government’s draft bill.

Time is ticking, however. Presenting its draft law, the cantonal government said that for CPEG to be authorised to operate on a partially funded basis – the current system – the government’s measures needed to be adopted by June 2018 at the latest. This is the time needed to allow ASFIP to give its authorisation.

The June 2018 deadline also includes any time needed for a referendum, which IPE understands the unions would push for if the parliament adopts the draft bill.

CPEG, in the meantime, is holding off on implementing its rehabilitation measures to see if the government’s proposal is adopted by June. If this is not the case then the pension fund’s committee would settle on a date for its own structural measures to kick in.

If the draft law is adopted, then “all players will have taken their responsibility,” said Eric Alves de Souza, president of the CPEG, in a June 2017 note. “CPEG will be stabilised on a lasting basis.”