• Strong growth and weak price development have bolstered the krona’s fair value.
• The currency is depressed by the central bank’s dovish stance.
• Next year’s election is seen as market neutral.

A period of productivity growth and weak consumer prices has served to boost the fair value of the Swedish krona. However, the currency is still trading below what it is fundamentally worth according to analysts.

The medium to long-run fair value of the krona has risen on account of GDP growth in 2015 and 2016, and lower levels of inflation, especially versus the euro, says Andrew Bloomfield, associate director, research at Record Currency Management.

“These factors could have bolstered the underlying value of the krona, but the dovish monetary policy stance appears to have suppressed its actual value,” he says.

After central bankers embarked on a policy of rate rises in 2011 and 2012, inflation fell sharply, and policy setters have reversed their course, he says.

“They will be concerned about making a policy mistake, so this is partly why interest rates have stayed low,” Bloomfield says. He points out that Sweden is a small, open economy with a high proportion of trade,  and monetary policy makers are wary of causing an overreaction with credit tightening.

Claire Dissaux, head of global economics and strategy at Millennium Global Investments, says that from a valuation perspective, the Swedish krona scores on the cheap side on most of the measures the firm uses. “For example, our purchasing power parity metrics indicate that fair value for EUR/SEK is around 8.8, as against the current spot rate of 9.53,” she says.

“The key reason behind currency undervaluation is central bank policy, which is keeping real rates among the lowest in developed markets and discouraging potentially supportive portfolio flows,” says Dissaux. But a mix of domestic inflation ticking higher and European Central Bank (ECB) tapering ought to lead to a change in the Riksbank’s dovish approach, she says.

“Our purchasing power parity metrics indicate that fair value for EUR/SEK is around 8.8, as against the current spot rate of 9.53”

Of the four factors that affect currency value — productivity, relative prices and inflation, trade balance and real interest rates — Sweden’s high inflation is keeping the currency depressed on foreign exchanges, according to Carl Hammer, head of global macro and FX research at SEB.

“Fair value for the Swedish krona is 8.5 to the euro, so there is still a small undervaluation,” he says.

Productivity, on the other hand supports a stronger krona as the economy is growing faster than that of other countries, says Hammer.

“There has been quite a lot of change in levels productivity in Sweden over the last few years, but we argue that productivity will continue to be positive because of the growth in real interest rates,” he says. Because of this, the long-term outlook for the krona is strong, he adds. 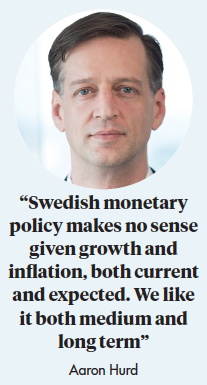 SEB argues that the krona ought to become a safe haven in the future. Even though the Riksbank works hard to keep the krona’s value down, Sweden’s balance sheet has accumulated a high level of foreign wealth, leading to a situation which has given the krona defensive qualities, Hammer says.

“The krona is in the process of changing from a currency which used to be very cyclical to something that is uncorrelated to global risk appetite,” he says.

Dissaux highlights the illiquidity of the krona market, however. “Despite a steady current account surplus, its relatively low liquidity rules it out for safe haven currency status,” she says.

Looking at the krona in relation to the leading currencies and the factors affecting them, Hammer says dollar is set to recover this autumn because the market has been too cautious on future Federal Reserve interest rate hikes. “Sterling is tricky because everything depends on the Brexit negotiations,” he says.

Meanwhile, the euro, in SEB’s opinion, has appreciated too far in the short term and is therefore due to fall.

But in the longer term, according to Hammer, the opportunity for co-operation between German chancellor Angela Merkel and France’s president Emmanuel Macron and the fact the EU is pushing to create more common institutions, such as banking union, could lead to greater strength in the currency.

“The world is underweight in European reserves, so a decline in the European political risk premium will continue to mean gains for the euro,” he says.

Sweden is facing a general election next September. But Bloomfield observes that market participants do not appear concerned about the possibility of political upheaval — despite signs the anti-immigrant Sweden Democrat party is gaining popular support. 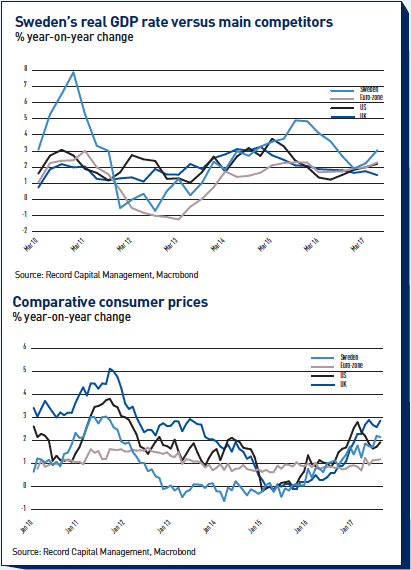 Whereas in the run up to the 2016 French presidential election, euro put options became much more expensive than calls, indicating negative sentiment about the outcome, this is not the case in the market for the krona now, he says.

“What’s interesting about the Swedish krona is that implied volatility over time is expected to increase, but there are not too many kinks at the time of the election — which suggests the market doesn’t appear overly worried about the election at this point,” he says.

Dissaux says that next year’s elections should have little impact, given the country’s tradition of political stability and long-standing fiscal rules. The firm has a generally favourable outlook for the Swedish krona compared with other developed market currencies, because of its relative cyclical position, she says.

The Swedish economy is at an advanced stage of the business cycle with the output gap now closed, which should underpin an earlier exit from monetary stimulus, she says.

Against sterling, Dissaux says the krona’s attractiveness lies in positive growth differentiation, with Sweden benefiting from euro-zone growth lift not to mention the lack of political risks compared with the UK. “The US is likely in the late stages of the business cycle but with the US dollar historically strong on a trade-weighted basis much of this has already been priced in by the market,” she says.

Meanwhile, State Street Global Advisors is bullish on the Swedish krona right now, mostly against the euro and the Swiss franc, says Aaron Hurd, senior portfolio manager, currency, at the firm. “On Swedish krona, we are currently bullish, mostly against the euro and Swiss franc. The Riksbank has to allow for currency appreciation and they seem very reluctant to front run the ECB,” he says.

Hurd points towards the fact that monetary policy is loose and that the Riksbank has taken a public stance favouring a weak currency.

“However, Swedish monetary policy makes no sense given growth and inflation, both current and expected,” Hurd says. For SSGA, the position requires patience, but is attractive, he says, “We like it both medium and long term”.