Will an ageing global population and a falling saving ratio trigger rate rises?

The decades-long trend of falling global bond yields poses several challenges for European institutional investors. The ratcheting down of expected long-run returns – and the growing discrepancy relative to liabilities – has led to discussions about the trade-offs required to meet return objectives. As this unfolds in portfolios, one hopeful note is that we believe that the downward trend in long-term bond returns will not extend indefinitely into the future.

The first, rather pedestrian, reason is that bond yields have already risen, implying less drag on future returns as they drift towards equilibrium. To be sure, locking in today’s risk-free (German) government yield of about 40bps is still not compelling, especially when considering the elevated fixed-income valuations. But, the situation has improved relative to 2016’s sub-zero bond yield period.

The second reason for bond return projections to be more stable is that equilibrium yields are no longer falling as fast. This is driven by projections of long-term economic growth (a reasonable rule of thumb is that for a given change in trend economic growth, the risk-free rate of the economy changes by the same amount). A key factor driving both growth and interest rates will be demographic change.

Demographics matter because the global ageing process will become faster and more synchronous. The dependency ratio – defined as the ratio of the older to the younger population – has been rising in Japan and Germany and is beginning to increase in the US and China. According to United Nations population forecasts, the overall dependency ratio for this set of economies will rise by 10% per decade over the next 30 years.

This trend will influence estimates of equilibrium interest rates. In the context of JP Morgan’s Long-Term Capital Market Assumptions (an assessment of return expectations for the next 10-15 years), slower labour force growth owing to weaker population growth and ageing workforces is likely to reduce trend global growth and interest rates by about 50bps over that period. 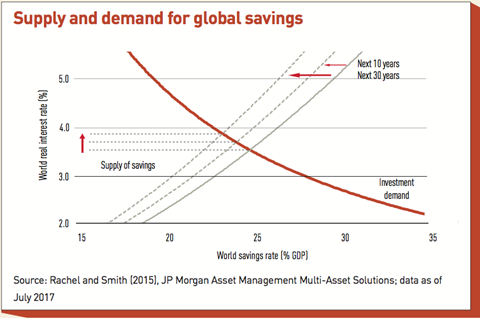 We also propose a mechanism by which demographic change presents upside risk to interest rates. Such a risk could materialise if demographic change drives a shift in the supply of global savings, akin to what former Federal Reserve chairman Ben Bernanke referred to in the mid-2000s as the “savings glut”. Back then, the idea was that the rapid buildup of savings in emerging market (EM) economies after a spate of financial crises in the 1990s, a sharp rise in the price of oil in the early 2000s and an upswing in household and corporate savings in China caused a outward shift in the global savings supply curve. As the argument goes, these increases could only be absorbed by global investment demand once interest rates moved lower and developed market (DM) economies became net borrowers. Consistent with that, real interest rates fell by more in the mid-2000s than estimates of trend growth.

Today, we stand on the brink of another massive swing in global savings, driven by the ageing of the global population. Older cohorts transitioning into retirement will save less as they draw down assets to finance consumption. The process is already underway in DM economies and will hasten in the coming years as American retirement rates continue to rise and, eventually, as China’s population ages and lowers its saving rate. Our analysis of the US, Germany, Japan and China suggests that an age-driven decline in savings of 2.6% of GDP will unfold over the next 30 years. Using estimates of the slope of the supply and demand curves for global savings (see figure), we estimate ageing will push up rates by 25 to 50bps over the next 30 years.

As such, demographic forces represent countervailing influences on interest rates. Slower labour force growth, dragging on trend growth, will put downward pressure on rates; at the same time, lower saving rates will apply upward pressure. We are fairly confident that the demographic forces driving trend growth and rates lower will be the powerful influence in the long run. But, we recognise that demographics can buffet interest rates along the way, subjecting our bond yield estimates to uncertainty.

Which force prevails – whether demographics drive rates higher or lower – will depend on how other parts of the economy respond.

There are several reasons to suspect the savings rate will withstand an ageing global population well, keeping a lid on interest rates. As households lower their saving rates, ageing populations may well boost savings in the rest of the economy. Governments may be required to shore up savings to meet future entitlement obligations, and businesses may take on less debt as they anticipate a slower-growth future. It is also possible that China’s growing weight in the world economy will pull global saving rates closer to its own levels. In other words, the fact that China is growing quickly means that its contribution to global savings flows will grow, not shrink, despite the downward trend in its national saving rate.

Alternatively, several factors could boost investment demand pushing rates higher. Take business investment spending or capital expenditure (capex), for example. Notwithstanding the fact that capex trends follow those of overall growth, we expect recent cyclical distortions in capex to normalise and for investment in technology (and intellectual property more generally) to support overall investment. Perhaps the biggest question mark with regard to ageing and investment is whether the demographic process will spur additional developments in labour-saving technologies and automation, This would cause the economy to become more capital intensive and support investment along the way.

All in all, these crosscurrents make it difficult to predict whether we will see a strong reversal of the global savings glut and a corresponding upswing in interest rates. As an example in the 1990s and 2000s Japanese government bond yields did not show any upward impulse as household savings declined, perhaps swamped by weak trend growth or the international drivers of rates.

What is clear, is that the accelerating and globally synchronised nature of demographic change will test this hypothesis to the test. And while the arrival of higher interest rates is not inevitable it as an upside risk.