Research: The need for retirement bonds

2
Research: Retirement Income - How much is enough?

Research: Retirement Income - How much is enough?

The final earnings replacement rate – where 70% is often advocated as the ‘right’ target – has been a longstanding and widespread measure of retirement income adequacy. Financial planners use this benchmark, as do actuaries and other pension plan advisers, academics, and public policy analysts. It underlies pension systems, drives research that determines whether populations are prepared or not prepared for retirement, and the backbone of retirement planning software.

But does it do the job that it is supposed to do? Will 70% of a worker’s final annual employment earnings sustain living standards after retirement?

The problem
After an extensive literature review, I was unable to locate any empirical demonstration that the earnings replacement rate accomplishes its goal. That is to say, there is no clear demonstration that shows that for a sufficient sample of workers who hit the prescribed target of 70%, living standards are, in fact, approximately maintained after retirement. We therefore decided to test it ourselves.

In MacDonald, Osberg and Moore (2016)1, we tested the conventional earnings replacement rate using one of the world’s largest dynamic micro-simulation models of society – Statistics Canada’s LifePaths dynamic population micro-simulation model. We asked whether those individuals from the 1951–58 Canadian birth cohort who attain roughly a 70% final employment earnings replacement rate at retirement actually achieve approximate continuity in their living standards.

We found that the conventional replacement rate is a poor metric of retirement income adequacy. Workers who hit this target were found to experience a wide range of living standards continuity after retirement, and we were unable to locate a ‘type’ of worker for whom the 70% target accurately predicts standard of living continuity. 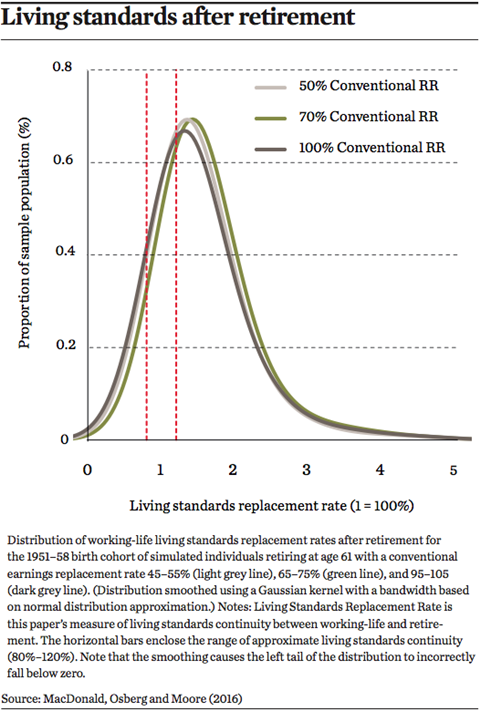 The issue is not whether 70% is too high or too low. The earnings replacement rate fails because a single year’s employment earnings are not a reliable representation of a worker’s living standard – it relies on an inadequate measurement period (only one year), does not incorporate important components of consumption sources (such as home equity), and ignores household size (particularly children). These omissions are crucial in calculating living standards. Moreover, these omissions interact, and the effect of improving one may not emerge without the others. Indeed, it is primarily owing to these significant and interacting omissions in the earnings replacement rate formula that there has been such a wide range of (often conflicting) reports on the retirement preparedness of populations and pension system reform impacts.

The solution
After concluding that the conventional earnings replacement rate is not fit for purpose, we were committed to come up with an alternative, more accurate way of measuring retirement income adequacy that practitioners and analysts could adopt. I developed the Livings Standards Replacement Rate (LSRR).

Drawing from best academic practices, the LSRR determines how well a worker’s living standards will be maintained after retirement by comparing how much money a worker has available to support his or her personal consumption of goods and services before and after retirement.

Analysts invest time and effort in the study of retirement income adequacy, but employing an unreliable benchmark for ‘adequacy’ not only effectively invalidates that effort, but it can lead to misleading conclusions. The LSRR offers a real alternative to the conventional replacement rate, and is bridging the gap between good science and industry need.

Our paper will present the LSRR framework so as to provide a guide for academics, financial planners, employer pension plan advisers and policy makers to follow when analysing questions of retirement income adequacy for individuals or populations .

The LSRR calculation considers the entire family, includes consumption components comprehensively and covers a representative number of years.  Having this framework available for analysts to reference will enable a more consistent measure of retirement income adequacy, so as to facilitate the interpretation, comparison and integration of findings across different analysis (between authors, over time and across nations). This would help the study of retirement income adequacy to move forward.

The LSRR provides an accurate, understandable, and consistent measure of retirement income adequacy, and this concept has proved extremely useful to practitioners in serving their clients². It has also been applauded for its academic merit3. Research that speaks to and shows value in both industry and academia is an uncommon achievement in non-health sciences.

Population ageing has led to widespread concern regarding retirement income adequacy, and now is time to adopt a better measure. The LSRR has penetrated the Canadian financial industry, and has gained considerable traction internationally. If the LSRR can create the necessary paradigm-shift within the pension industry and study of retirement income adequacy, the benefit to the public is incalculable.

1 Bonnie-Jeanne MacDonald, Lars Osberg and Kevin Moore. (2016). How Accurately does 70% Final Earnings Replacement Measure Retirement Income (In)Adequacy? Introducing the Living Standards Replacement Rate (LSRR). ASTIN Bulletin - The Journal of the International Actuarial Association, 46(3), pp 627-676, DOI: 10.1017/asb.2016.20. This paper is ‘open access’ meaning that there is no fee to download.
2  Here is an example of the LSRR serving industry (interview and short videos): https://www.eckler.ca/subpage-3-lsrr.
3 This work won the Pension, Benefits and Social Security Scientific Committee Award Prize for Best Paper at the 30th
International Congress of Actuaries in April 2014.

Bonnie-Jeanne MacDonald, PhD FSA, is an academic researcher in Halifax, Canada. On 17 November she will present a webinar on this topic. For further details see: www.actexmadriver.com/product.aspx?id=453138287

Research: The need for retirement bonds