2
Sensitivity of selected US equity funds to macro factors

Sensitivity of selected US equity funds to macro factors

Sensitivity of US equity funds

The chart data shows the sensitivity of the six largest US equity funds to changes in macroeconomic factors: US default spreads, term spreads, dividend yields and volatility. IPE and PureGroup selected the largest funds, in terms of assets, from the Morningstar database. The funds are Vanguard US 500 Stock index, Robeco US Premium Equities, Franklin US Opportunities fund, Legg Mason ClearBridge US Aggressive Growth fund, Morgan Stanley Investment funds US Advantage and JP Morgan US Select Equity Plus fund.

The higher the sensitivity of each fund to the macro factor, the higher the probability that performance will respond to changes in that factor. The top graphs show the sensitivity of the funds to the factors, while the bottom bar charts show the monthly movements of the factors over the past five years. The data was analysed using PureGroup’s Forward Perspective Model, a macroeconomic factor model built for the investment industry, covering open-ended, closed-end and exchange-traded products. The model analyses an investment product’s positioning to leading economic factors.

The default spread is the difference in yield between BBB and AAA US corporate bonds. Default spreads may rise as there are signs that corporate America is highly leveraged. Wider default spreads are likely to be the most favourable for the Robeco fund, as it has a relatively strong positive sensitivity to this factor. The Morgan Stanley fund is also positioned to benefit from an expansion in spreads, albeit to a lesser extent than the Robeco fund. The JP Morgan and Franklin funds are unlikely to be affected significantly by changes in spreads, because of their low absolute sensitivities. The Legg Mason fund is relatively more responsive to changes in spreads. This fund’s negative sensitivity to this factor means that it is not effectively positioned for an expansion in spreads. 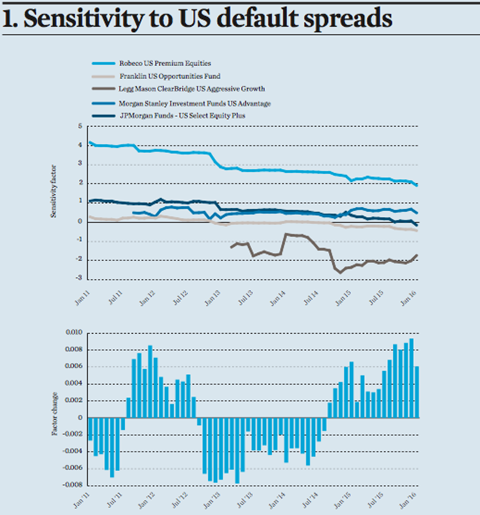 The term spread is the difference in value between long and short-dated government bond yields. US term spreads are unlikely to expand, despite conditions in the world’s largest economy being fairly supportive. With interest rates at rock bottom in most of the developed world, US long-term yields may appear relatively more attractive to investors who lack viable alternatives. The relatively strong positive sensitivity of the Morgan Stanley fund may not be as advantageous as expected. It is also unlikely to be a drawback as term spreads, as stable growth means that a contraction in term spreads is unlikely. This means that this factor may not have a significant positive impact on the returns of the Legg Mason fund. The remaining funds shown in the chart are less likely to be affected by any changes in this economic factor. 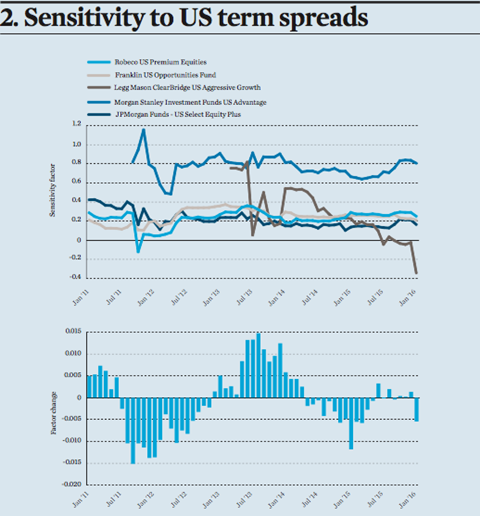 Changes in dividend yields are likely to be predominantly driven by share prices, which are strongly influenced by valuations. Currently, valuations of US equities – measured by Shiller’s cyclically adjusted price-earnings ratio (CAPE) – are fairly high by historical standards. Therefore, lower-than-expected earnings may result in a market correction. Falling stock prices may push up dividend yields, which may, in turn, contribute positively to the returns of the Legg Mason and Franklin funds but potentially erode the returns of the Morgan Stanley and Robeco funds. The latter is the most vulnerable to higher dividend yields because of its relatively strong absolute sensitivity. In contrast, the JPMorgan fund is relatively immune to changes in dividend yields because of its low absolute sensitivity. 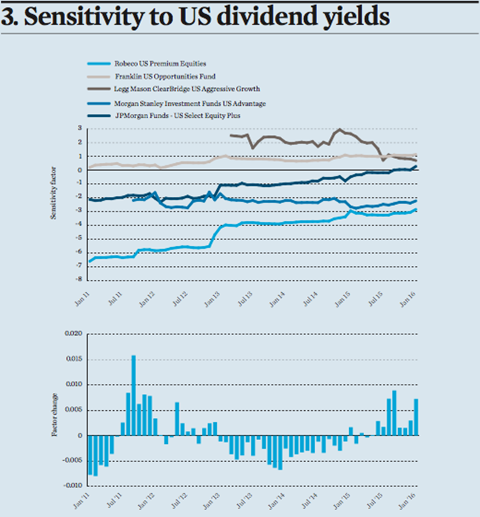 Volatility is represented by the VIX index – this measures near term market expectations for equity volatility embedded in options prices. In the lead-up to the US presidential election, with fears of a hard landing in China and concerns over Europe, volatility could increase in the coming months. This scenario will probably be most beneficial for the Robeco and Morgan Stanley funds, as they have relatively strong positive sensitivities to volatility. The Franklin fund may also benefit to a lesser extent. On the other hand, higher volatility has the potential to erode the returns of the Legg Mason fund, because of its negative sensitivity. The performance of the JP Morgan fund is unlikely to be affected by swings in volatility as the fund is neutral towards this factor. 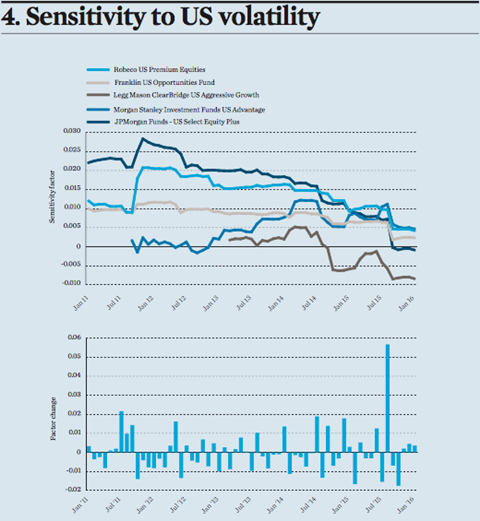