• AP funds 1-4 are to have their investment restrictions relaxed by government.
• Restrictions on internal management will also be lifted, opening the door to more insourcing.

Sweden’s four largest AP funds – the main buffer funds for the country’s state pension system – appeared to have had their greatest wish granted this summer.

The funds, which manage about SEK1.3trn (€135bn) of assets in total, have long lobbied to be given more freedom in the way they invest, arguing that liberation from some of the restrictions in their mandates would allow them to increase returns.

Many pension funds in the Nordic region have turned their attention towards unlisted investments including infrastructure, private debt and equity in recent years in a bid to add higher yielding assets to their portfolios as government bond yields remain either low or negative.

The AP funds have regularly warned that the levels of return they have achieved in the past are not sustainable in the current low-yield environment.

Last month, Johan Magnusson, the chief executive of AP1 , said the prospect of his fund being able to continue delivering a high real return had become more demanding. AP1 returned 7.6% after expenses in 2016, and has averaged 4.3% a year over the past decade.

The real return target for the AP funds is 4% on a rolling 10-year basis. In the 10 years to the end of 2016, all four funds achieved this comfortably.

In July, the Swedish finance ministry followed up on an announcement made in May by publishing a series of draft changes to the AP funds’ mandate, including a new 40% ceiling on illiquid investments.

The limit replaces the current 5% cap on unlisted instruments.

However, the 40% ceiling is to include real estate, whereas this asset class is not restricted under the current rules.

Alongside the change in the illiquid investment allowance, the proposed changes to the mandate include a reduction in the minimum allocation to interest-bearing securities with low credit and liquidity risk to 20% from 30%.

It is not the first time Sweden has sought to reform the AP funds’ investment rules, but the previous attempt was attached to the widely criticised – and ultimately abandoned – structural reform that would have seen two of the funds merged.

If the draft becomes law, the AP funds will also be free of the obligation that they have to manage at least 10% of their assets externally.

This could allow funds such as AP2 – which has brought significant assets in house in the last few years – to extend insourcing.

The proposal also aims to bolster and clarify the rules on the funds’ sustainability work.

The funds have responded positively to the publication of the draft changes to their mandates, but their continued emphasis on the need for flexibility suggests that there may yet be pressure for the government to relax its grip further before the new mandate becomes law.

AP4 ’s chief executive, Niklas Ekvall, has said that apart from having greater freedom in the choice of investments, it is also crucial for the funds to have enough flexibility to invest cost effectively. 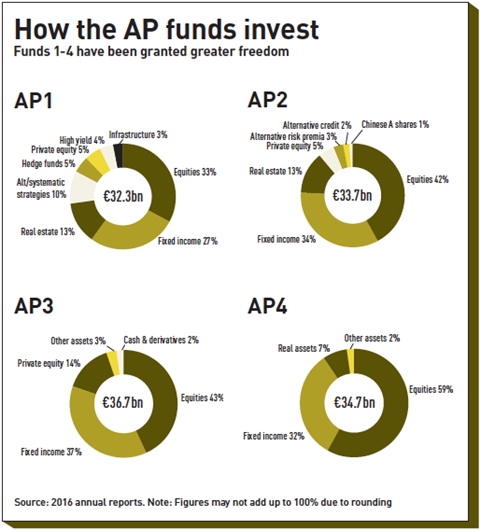 AP2, which is based in Gothenburg, says there are many positive aspects of the draft.

“A more modern and flexible framework can provide us with better prerequisites for achieving our return targets in the long term and thus fulfil our role in the pension system,” says the fund’s co-ordinator of corporate governance, Ulrika Danielson.

“The proposal in its present form, however, imposes restrictions on the AP funds’ ability to choose the form of investment for illiquid assets,” says Danielson.

“To continue to be cost effective in asset management it is important that the AP funds are also allowed to have flexibility in the choice of form of investment in illiquid investments.”

As one of the referral bodies, AP2 will be providing more detailed comments during the autumn, Danielson says.

Meanwhile, Kerstin Hessius, chief executive of AP3 , says she welcomes the revision of the investment rules for the four main buffer funds. She says: “We will probably suggest some minor changes for making the proposal even better.”

Will AP3 make full use of the new freedom to invest in unlisted instruments, and if so how? “It is very important to be careful and responsible in developing the strategy, there are many investment aspects to take into consideration,” Hessius says.

Now in a consultation phase with a deadline for responses of 26 October, the new rules are scheduled to take effect next July.