The £2.6bn Church of England Pensions Board (CEPB) plans to halve its public equity exposure as part of a radical asset allocation overhaul.

In its annual report the board – which runs assets on behalf of four pension schemes – set out its aim to reduce public equities from its current level of around 70%, to 35% of its £2bn return-seeking portfolio.

The CEPB also said it would target an infrastructure allocation of 20% of the return-seeking pool. The strategy shift would be implemented over the course of the next 10 years, it said, to increase diversification and reduce volatility.

It also set out plans for a further increase in exposure to less-liquid investments that rely more on contractual income, such as infrastructure, various forms of debt, and private equity.

Pierre Jameson, CEPB’s chief investment officer, told IPE that the fund would expand its allocation to US private debt through the rest of 2018, and also embark on a global private equity investing programme.

In its annual report, the CEPB recorded a 9.4% investment return, led by a 28.8% gain from its emerging markets portfolio.

While last year’s return was significantly lower than its 21.2% gain in 2016, the investment portfolio comfortably beat its benchmark return of 7.1%.

The result was largely driven by equities, the fund’s public equity portfolio returning 13.8% over the year. Infrastructure returned 8.3% and property added 5%. 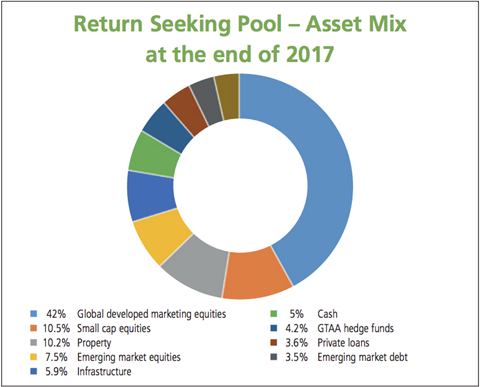 In its report, the CEPB said its currency hedging programme contributed around 1.9% to its result. Stronger sterling had hurt returns, with the pound appreciating nearly 10% against the US dollar over the year.

The fund has hedged half of its dollar, euro and yen exposure in equities and infrastructure, and all its dollar exposure in private debt.

The CEPB said: “Pension liabilities are denominated in sterling, so we take a prudent stance and partially insure against sterling strengthening. Over the last 10 years, the board has been a net beneficiary from sterling weakness, although the prudent currency hedge has reduced that impact.”