ABP’s accountability body, an organ consisting of members that monitors the board of the Netherlands’ largest pension scheme, wants the fund to make public the criteria it uses to define a company as a frontrunner or laggard when it comes to sustainability.

“This is a very important point for us,” the body’s president Sofie Faes told IPE. “The starting point of an effective sustainability policy is the quality of the criteria that are chosen. This makes it important these criteria are public.”

ABP claims it wants to focus its investments in companies that it defines as “frontrunners” in sustainability. At the same time, the €551bn civil service scheme prefers to avoid firms it considers laggards.

However, the criteria the fund uses to define companies as frontrunners, laggards or improvers – companies that have bad scores but have the potential to do better – have never been made public.

According to Faes, ABP’s participants as well as NGOs should know what these criteria are so they can hold the fund accountable and judge whether they are ambitious enough and fit with members’ preferences. As such, it demands ABP to make them public for each sector. 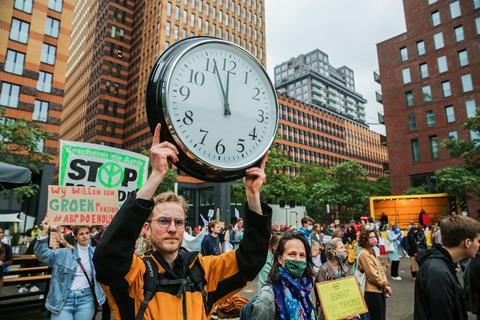 Currently, companies do not seem to have to make much effort to be defined a frontrunner by ABP. The fund considers 85% of the companies it invests in as such. At the same time, only 3% of companies are seen as laggards and just 2% as improvers.

ABP said in its 2021 annual report it is “looking critically” at its policy because its results “have not met expectations”. As a result, the fund “possibly” wants to make changes to its policy “in order to make it more effective”.

A spokesperson for ABP declined to comment in detail on why the policy has so far disappointed.

Separately, ABP’s asset manager APG has made changes to the investment strategy of the fund’s equity portfolio to improve returns, which have lagged the benchmark for several years.

In 2021 the changes “did not yet sort notable effects”, according to ABP. The fund declined to say which changes it has made, as this is not deemed in the interest of ABP’s members.

The scheme’s asset management costs rose above the 1% mark to 1.08% (including transaction costs), a rise of 0.3 percentage points despite efforts to reduce costs. The higher costs were almost entirely due to a large rise in performance fee payments to private equity managers.

ABP said it is working to cut costs on its alternatives portfolio by reducing its investments in external funds. It has also commissioned an external party to investigate the rising asset management costs.

Pension admin costs also rose in 2021 from €67 per member to €72, and a further rise is expected this year. The cost rise is explained by investments “to reorganise data in our administration, improve the experience for members and employers and to prepare for the pension transition”, ABP wrote in its annual report.