An academic study has found “blue hydrogen” production to be a high emissions activity, with one pensions expert pointing to implications for investors with net-zero portfolio ambitions.

Carried out by Robert Howarth and Mark Jacobson, of Cornell and Stanford universities, respectively, the study is the “first effort in a peer-reviewed paper to examine the lifecycle greenhouse gas emissions of blue hydrogen accounting for emissions of both carbon dioxide and unburned fugitive methane,” the authors said.

According to the researchers, to date no peer-reviewed analysis has considered methane emissions associated with producing the natural gas needed to generate blue hydrogen, although methane is a powerful greenhouse gas.

Howarth and Jacobson said blue hydrogen is frequently promoted as low emissions, but that greenhouse gas emissions from its production are quite high, particularly due to the release of fugitive methane. This is linked to increased use of natural gas to power the carbon capture.

For the researchers’ default assumptions – 3.5% emission rate of methane from natural gas and a 20-year global warming potential – total carbon dioxide equivalent emissions for blue hydrogen are only 9%-12% less than for gray hydrogen, they said. 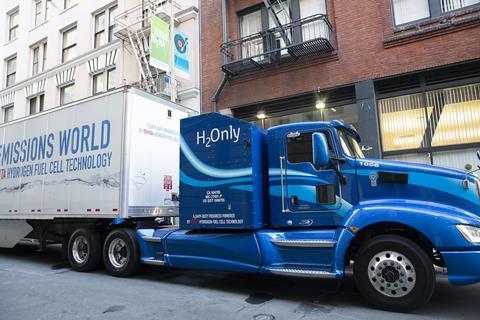 Some vehicles are being powered by hydrogen fuel cells

When they reduced the methane emission rate from natural gas they found greenhouse gas emissions from blue hydrogen are still greater than from simply burning natural gas, and only 18-25% less than for gray hydrogen.

“Our analysis assumes that captured carbon dioxide can be stored indefinitely, an optimistic and unproven assumption,” they wrote in the abstract to their paper. “Even if true though, the use of blue hydrogen appears difficult to justify on climate grounds.”

In the body of the paper itself, they added: “Society needs to move away from all fossil fuels as quickly as possible, and the truly green hydrogen produced by electrolysis driven by renewable electricity can play a role. Blue hydrogen, though, provides no benefit.”

Commenting on LinkedIn, Shalin Bagwan, head of pensions advisory and EMEA consultants at DWS, said that if the study proved accurate, “then UK pension funds will need to think carefully about their net-zero ambitions and how they achieve them”.

“Long-term, illiquid equity and debt investments may not be so easy to unwind in the face of changing scientific evidence.”

He suggested shorter-dated infrastructure debt, of a five to 10-year maturity could be more attractive from the point of view of providing more “optionality”, compared with longer dated (10-30 year) debt.

The Howarth and Jacobson study can be found here.