The latest Pensions Risk Survey for July by consultantcy Mercer revealed that UK FTSE 350 defined benefit (DB) accounting deficits increased by £13bn (€14.3bn) between the end of June 2020 and the end of July to reach £103bn.

Total DB liabilities reached £970bn at the end of July – an increase of £13bn – while asset values remained unchanged at £867bn.

He said: “These are testing times for trustees who, more than ever, need to understand the financial challenges facing sponsoring employers.

“Now is not the time for them to be increasing investment risk. Rather, where possible, trustees should consider reducing risk, taking market opportunities to increase hedging programmes and contemplate lower risk contractual cash flow matching investments.”

Earlier this week, consultants Aon said the gap between the best and the worst funded UK FTSE 350 DB schemes was widening.

Commenting on the trend, Cowling told IPE: “The actual numbers that trustees look at and will be negotiating on are often worse than the IAS 19 numbers. It is frequently the case that the IAS 19 position flatters the position that the trustees are looking at.

“So, what we are seeing is a double impact where not only are the accounting numbers getting gloomier but the trustee numbers could be gloomier still.”

He added that those schemes that are unhedged “are potentially worse off because the gap between those that have taken risk off the table and those that have not is widening.”

The Mercer findings come as the Bank of England’s Monetary Policy Committee today voted unanimously to keep rates on hold at their current record low of 0.1%, signalling further concern about the outlook for the economy. 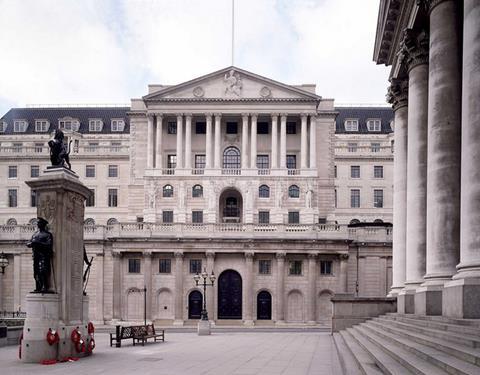 The Bank of England’s Monetary Policy Committee today voted unanimously to keep rates on hold at their current record low of 0.1%

Despite the decision, however, markets are nonetheless pricing not only future rate cuts – possibly into negative territory – but also that the bank will embark on further quantitative easing, all of which will add further downward pressure on long-term interest rates and upward pressure on pension liabilities.

In the meantime, the UK economy is predicted to shrink by more than 10% this year.

The survey also revealed the steady decline in discount rates over the course of the past seven-and-a-half years.

This fall represents a particular challenge for DB schemes because international accounting standards require them to discount liabilities with a high-quality corporate bond rate, meaning that decline yields translate into higher pension liabilities.

Marked-implied inflation, however, has remained broadly stable above the 3% mark after dipping to around 2.8% during March and April.