Dutch pension funds have had the highest percentage of assets invested abroad, with a percentage of around 87% at the end of 2018, compared to other OECD countries, a survey by PwC has shown.

The firm, which examined 31 of the 36 OECD countries for the Association of Luxembourg Fund Industry (ALFI), has found that foreign investment by the countries’ pension funds had risen to 38% from 31% on average since 2014.

Within this period, foreign holdings of Dutch pension funds had increased by six percentage points.

It said that pension funds in Finland and Portugal came second and third, with 75% and 65%, respectively. In 2018, the UK had invested 22% of its assets overseas.

The ratio of pension assets to GDP has been increasing during the last few years as pension assets grew much faster than GDP, with a 6.2% compound annual growth rate (CAGR) from 2014 to 2018 compared to a 1.9% GDP growth in the same period, the report disclosed.

The pension market in the Netherlands is well developed and is one of the most mature with an €1.3trn estimated assets under management in 2018.

Moreover, the market is fairly concentrated, with the largest 10 pension funds holding 74.5% of total pension assets. ABP, the country’s largest pension fund, is on the 2019’s Leaders List of the 25 World’s most responsible asset allocators, PwC said. 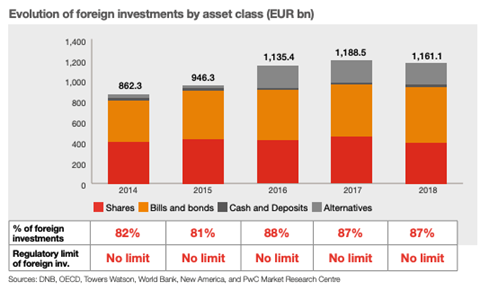 In 2018, 94% of Dutch pension schemes were defined benefits (DB) schemes. The survey also found that asset allocation of Dutch pension funds is diversified with an estimated 29% invested in equities, 46% in bonds, 3% in money market and 21% in alternative investments.

Pension funds in the Netherlands invest around half of their assets directly, with an estimated 50% allocated through investment funds.

Fourteen of the surveyed countries, including the Netherlands and Belgium, do not have any set limits to foreign investments for their pension funds.

Five countries, including Denmark, Norway and Spain, do not have any investment restrictions as long as the investments are made in OECD member states.

Stricter limits apply to pension funds in 11 countries, such as Poland, where pension funds can’t invest more than 30% elsewhere.

PwC said these restrictions in particular were the reason that pension funds invested only a small amount of their assets abroad. The stakes of Poland, the Czech Republic and Germany were 8%, 10% and 13%, respectively.

The Dutch retirement industry is strongly consolidating – there are around 250 schemes – as the number of pension funds has been divided by three over the past 10 years and PwC expects this trend to continue.

Alongside pension funds increasingly looking beyond their borders, the imbalance between employed contributors and retired beneficiaries is shifting the market towards defined contribution (DC).

In 2018, assets in DC plans overtook those is DB for the first time, the survey found. This is as DB plans become less able to address the risks that arise from ongoing demographic shifts across the globe, Yazdani said.

DC schemes, on the other hand, are better equipped to do so due to automatic adjustments, he added.