The City of Westminster Pension Fund has agreed to consider its first investment in renewable infrastructure as a new illiquid alternative asset class, following its pension fund committee meeting on 23 January.

The £1.5bn (€1.8bn) local authority fund said the decision came on the heels of a review of its investment strategy conducted by its investment adviser, Deloitte.

The review recommended the committee invest at least 5% of its assets in an illiquid alternative asset class, in addition to an extra 5% injection into its fixed income portfolio, which could be distributed across existing portfolios, or allocated to a brand new mandate, such as direct lending.

According to a report to the committee prepared by Phil Triggs, the tri-borough director of treasury and pensions, a significant amount of investment is required in renewable energy infrastructure given the UK government’s pledge to reduce greenhouse gas emissions to net zero by 2050.

He added that investors should be willing to accept the development risk that comes with this asset class, which can offer higher returns but with a greater risk of default.

Deloitte also advised the fund to consider residential property as it would provide greater diversification than its existing long lease and core portfolios.

To this effect, the advisor has recommended the fund reviews its equity allocation and reduce it by 10%.

According to Triggs’ report, the scheme’s current strategic asset allocation, as at 30 November 2019, was 65% equities, 20% fixed income, 10% property and 5% infrastructure.

Whilst the 65% equity allocation had contributed positively to the fund, it had also increased the scheme’s volatility, Triggs wrote.

As per Deloitte’s calculations, based on the fund’s current strategic asset allocation, the best estimate median expected return is 5.4% p.a., with a volatility of 13.2% p.a.

The firm also estimated, by using its worst-case scenario modelling, the one-year 95% value-at-risk to be £418m. 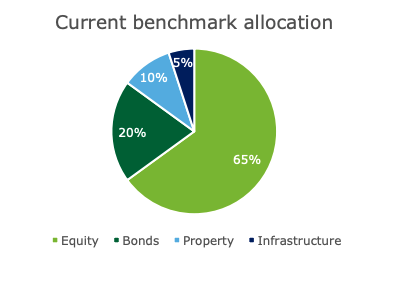 City of Westminster Pension Fund, asset allocation as at 30 November 2019

The director highlighted the issue that almost two-thirds of the fund’s assets are allocated to equities.

Given the change in funding level, the committee should consider whether the structure and allocation to equities is still appropriate.

Westminster’s current equity allocation is comprised 70% of the LGIM global passive fund and 30% of the Baillie Gifford Alpha Growth portfolio.

In order to improve diversification within this asset class, Deloitte has suggested that a third global equity manager be selected for an active mandate to complement the other two managers.

When selecting a new equity manager, the committee should consider the options available on the London CIV platform – of which Westminster is a member – and may also want to consider funds with an environmental, social and governance-specific approach.

At the moment, the scheme has little risk reduction from diversification, according to Triggs’ report.

“There is scope for further diversification, particularly with the use of more illiquid assets,” he wrote.

The committee will meet again on 20 February and a decision on the  recommendations was expected shortly, according to the report. Once agreed, a timeline for implementation throughout 2020 will be drafted, Triggs said.