The German insurer Talanx and the country’s second largest trade union ver.di have agreed to deliver a defined contribution (DC) plan under the so-called social partner model, marking a breakthrough for a new approach to pensions in Germany.

“The social partner model is alive and well – despite all the naysayers,” said Fabian von Löbbecke, a member of the board at Talanx.

“Roughly two years after the act to strengthen company pensions came into effect, we have found an important partner in ver.di, with whom we have now established the foundation for making the new retirement provision model available to our employees.”

The two parties still have to agree technical details, with Talanx saying the agreement with ver.di was expected to be finalised by the beginning of January 2020. Von Löbbecke described the negotiations as “constructive and goal-oriented”.

The plan is to be implemented after approval from BaFin, the financial regulator.

Martina Grundler, insurance expert at ver.di, which covers the services sector, added: “For employees, the social partner model can be a sensible building block for financial security in old age. 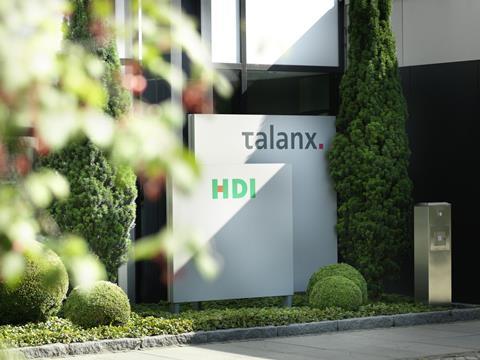 “The fact that Talanx – as the first employer in Germany – now plans to implement this new instrument of retirement provision on a joint basis with us represents an important step especially for employees with low incomes and can could be a model for other companies.“

The prospective plan will be provided via Die Deutsche Betriebsrente, a vehicle set up by Talanx and fellow insurer Zurich last year. It may yet also secure Zurich as a client, with the insurer saying it also intended to adopt the social partner model, and planned to begin negotiations with ver.di shortly.

The Talanx spokesman explained that Talanx and ver.di hoped their agreement could serve as a blueprint. “We have to wait and see if other industries feel fired up by it,” he said.

The new type of pension provision has been permissible since the beginning of 2018, when major occupational pensions reform legislation entered into force, and take-up of the option has been keenly anticipated.

Klaus Stiefermann, managing director of aba, Germany’s main workplace pensions association, said: “As aba we are very happy that there’s some movement with regard to the social partner model. From what we read [this development] looks very promising.”

The new type of arrangement is referred to as the social partner model because it has to be collectively agreed by the employer or employer associations, and the employee side. The social partners are responsible for jointly “steering” the arrangement, which provides a “pure DC” or “defined ambition” pension plan to reflect the fact that neither the employer nor the pension fund or insurer can be on the hook for any benefits.

This represents a major change in occupational pensions in Germany, with the point being that guarantees come at a cost, therefore eating into returns – a particular concern in light of negative interest rates and low yields.

“Now occupational pensions can benefit from participating in productive capital,” said aba’s Stiefermann. “We wish the negotiating partners success – the importance of their leadership with regard to [the new model] cannot be emphasised enough.”