European pension funds should re-evaluate their equity holdings in the light of US president Donald Trump’s escalating war of words with China over trade tariffs, commentators have warned.

Markets around the world tumbled earlier this week following president Trump’s announcement that he was considering adding tariffs on a further $200bn (€170bn) of Chinese goods following China’s retaliatory imposition of levies on $34bn of US goods.

On Tuesday, the Dow Jones closed down by almost 300 points – wiping out any gains over the year. Asian markets rallied on positive US housing data, having seen the main markets in Singapore and Japan fall by 1% and 0.8% respectively a day earlier.

“This is certainly something that pension fund investors should be aware of and concerned about,” said Alastair George, chief investment strategist at Edison Investment Research.

George has advised caution “for some time”, he said, not just because of the burgeoning trade dispute but because markets were likely to trade sideways following moves by the US and Europe to wind down monetary stimulus programmes.

“At this stage you’re talking about running a defensive portfolio position – not that you fear a calamity, but because you have relatively little upside,” he said. 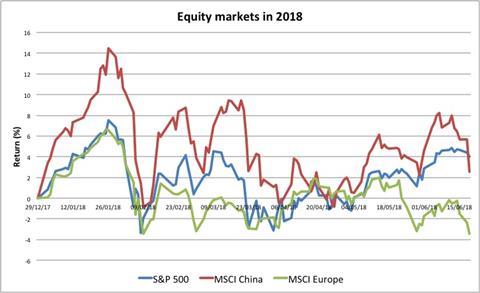 How US, Chinese and European equities have performed this year. (Total return, priced in dollars)

“If the markets trade sideways, then whether you are worried about a trade war or a peak in the economic cycle your response would be broadly similar in terms of your equity allocation: avoid globally traded commodities, the resources sector and emerging markets.”

Last week, the US president announced a 25% tariff on $50bn of Chinese products ranging from cars to agricultural products, taking effect from 6 July. The US has also threatened imposing tariffs on products imported from Canada and the European Union.

China, meanwhile, has threatened a 25% tariff on imports of US coal, oil and gas.

“Europe is very exposed as it is very open [to trade],” said Tapan Datta, head of global asset allocation at Aon. “There are a lot of European industrials that would be impacted – but at the margin the move will boost some US stocks.

“Over the course of these things, there will always be some winners and it is likely that some US stocks will win [over the short term].”

Datta added a note of optimism, however: “It is still too early to get alarmist that the markets will tank.”

In a note published on Wednesday, State Street Global Advisors lauded the “stellar first quarter results” of S&P 500 companies, which were now on track to “post a nearly 25% increase in earnings compared to last year”.

Pal Sarai, managing director and head of client consulting for EMEA, Australia and Asia at consultancy Bfinance, said the events unfolding in Washington and Beijing could prove to be a “major geopolitical risk that may derail the nascent global economic recovery”.

Insuring against equity risk has come to the fore recently, he added: “There has been a trend in recent months towards strategies that may protect against equity market falls, and this could support the continuing appetite for such strategies.”

Ultimately, the escalation of the trade dispute between the US and China should “have investors worried”, added Seema Shah, senior global investment strategist at Principal Global Investors.

“Recall that the original tariffs on about $50bn-worth of Chinese imports motivated sharp declines in equity markets, despite not being expected to have a meaningful impact on the global economy,” she said. “The latest ratcheting up in the trade dispute may trigger even more severe market turmoil.”

Trading blows: Who said what, and when, in the war of words 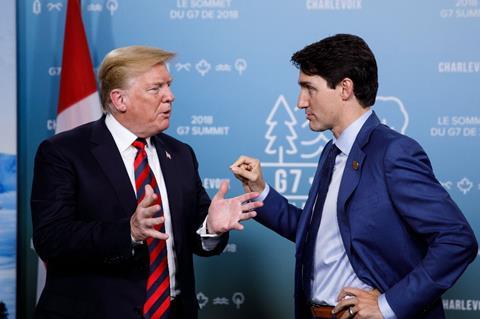 January: US imposes tariffs on steel products from India and China

February: Anti-dumping duties levied on iron and aluminium from China

March: US adds to tariffs on Chinese steel and aluminium

April: China retaliates, imposing tariffs on US products such as cars and aircraft; Donald Trump threatens more tariffs on $100bn of goods

May: “Ceasefire” announced by China and US

8 June: Trump criticises France and Canada over trade ahead of G7 meeting in Quebec

15 June: US imposes 25% tariff on $50bn of Chinese goods; China retaliates with levies on $34bn of US products