Trustees must be willing to tackle 'big, difficult decisions' – 300 Club

European pension funds need to make a “fundamental” behavioural and cultural shift to close “a yawning gap between the rhetoric of governance improvements of recent years and their reality on the ground”, according to a paper from The 300 Club, a group of investment professionals seeking to challenge mainstream investment practice and thinking.

Written by Sally Bridgeland (pictured), senior adviser at governance consultancy Avida International and former chief executive of BP Pension Trustees, and Amin Rajan, chief executive at Create-Research, the paper argues that while European pension funds have made some notable improvements with respect to investment and risk management in recent years, the changes do not go far enough.

“In many cases, trustees have adhered to the traditional model of managing the easy things that don’t matter and avoiding the harder things that do,” said Bridgeland. 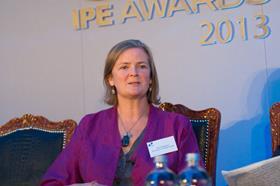 Sally Bridgeland speaking at the IPE Awards in Noordwijk.

“Many of the changes so far have focused on low-hanging fruit – targeting specific areas that are easy to define and tackle without reinventing operational or governance capabilities.”

Rajan said improvements in the “less tangible” aspects of pension business models had been lagging, and that a behavioural and cultural shift was needed “to create fundamental and meaningful change”.

The paper describes how “the backdrop for making decisions has become scarier” as defined benefit pension schemes are increasingly seen as a burden rather than an incentive in employee remuneration.

As a result, trustees face greater scrutiny from an increasingly critical sponsoring employer for the decisions they make, according to the paper.

Against this backdrop, said Rajan, “loss and risk aversion take over”.

“The risks are increasingly emphasised, and the problem becomes framed in terms of avoiding failure,” he said. “As the fight-or-flight instinct kicks in, the brain is screaming ‘run way’ (from the difficult decision).”

A behavioural shift on behalf of trustees is needed to create the willingness to tackle big, difficult decisions, according to Rajan and Bridgeland.

“It also requires an environment and culture in which trustees feel comfortable making decisions about which risks the pension fund should take and, most importantly, how it should take them,” they write.

The paper sets out six steps for pension funds to achieve these goals.

Although there is no right answer, the “right governance”, according to the paper, “can reduce discomfort and build appropriate confidence at an appropriate cost”.

The six steps include “opening a different kind of dialogue with the sponsoring employer”, developing a strategy “for how the pension fund will succeed and deliver its financial mission of paying everyone the right pension”, and taking control of meeting agendas and priorities.