It is one of those areas where practical investment questions are difficult to untangle from moral ones. Are commodity prices being driven by what is sometimes referred to as “speculation” rather than the fundamentas of supply and demand?

The implications for investors are clear. If they are to make commodities part of their overall portfolio, it is important to understand how they are likely to behave. It is a question that has clear real-world implications.

In contrast, the debate about speculation is murkier. For some the term is a moral one; with their ire aimed at the derivatives markets in particular. This discussion is often focused on the use of derivatives in agricultural commodities.

For others, the term is descriptive. It is a way of describing the upward pressure on prices caused by activity in the derivatives markets. That is in contrast to hedging which is about seeking protection from price volatility.

In any event, it is agreed that the markets have become more financialised. The use of commodity derivatives has grown enormously over the past two decades. The question is whether such activity sends false signals which mislead companies and investors. 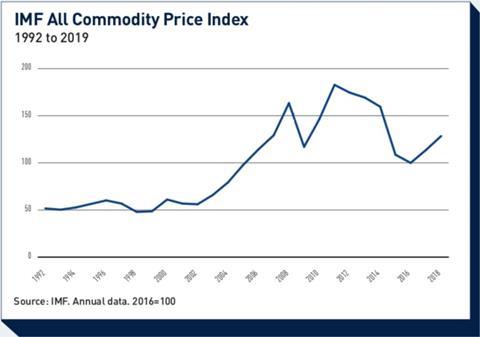 Although the debate is far from new, there are reasons why it seems to be coming to the fore. For a start, overall commodity prices have risen since early in 2016. Debates about speculation often coincide with rapid upward shifts in prices (see figure). The last big debate on the subject – involving many from then President Barack Obama downwards - coincided with price swings. After 2012, with aggregate prices reaching their peak, the discussion petered out.

Another reason it has come to the fore is that China is starting to open up its commodity derivatives markets to foreign investors. China is, of course, a huge consumer and producer of natural resources and has evidently decided it should also be a substantial player in related derivatives.

To start to separate financialisation from fundamental forces it helps to remember the basics. These should be straightforward, but there is all too often confusion even at what should be the simplest level.

The key point is that the fundamental driver of commodity prices is the balance between supply and demand. That is neither force on its own, but the combined effect of the two dynamics interacting with each other. 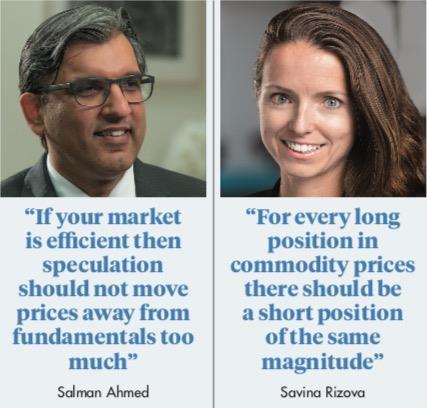 Sadly it is all too common to come across people arguing that rising demand will inevitably lead to higher prices. This fallacy has been around since the late eighteenth century when Thomas Malthus, an English demographer and cleric, argued that population growth was bound to push up food prices to crisis levels. Mass starvation would, in his view, be the inevitable result. Since then the argument has been extended by many with a similar mindset to include other natural resources.

But, if this were true then commodities would have been on an upward trend for over two centuries. After all the world population has risen from 1bn in Malthus’s day to 7.5bn today. But that is not the case. For example, a recent study by David Jacks, an economics professor at Simon Fraser University in Canada, shows real commodity prices in 2011 at only marginally higher levels than in 1900 – with numerous booms and busts in between (“From boom to bust: a typology of real commodity prices in the long run,” Cliometrica 13, 2019).

Of course, if all other factors are equal then prices will rise when demand increases. The key caveat is that other things rarely are equal. As global demand increases so typically does supply. More resources are extracted from the ground, grown or in some cases recycled in response to the anticipation of rising demand. Sometimes supply growth runs ahead of demand growth while at other times it lags behind.

This is crucial because it suggests that prices can fluctuate dramatically even if there is no speculation. If one variable decreases a little and the other increases a little then the price shift can be appreciable.

There are also secondary factors – such as storage costs and insurance costs – but the other key variable is the effect of the futures market. It is accepted that it has an impact on setting price levels, but the tricky question to determine is how much.

A recent paper on “Understanding Commodity Financialisation” by Ruslan Kharlamov (the chief executive of SteelHedge, a risk management platform) and Heiner Flassbeck (a former chief economist at United Nations Conference on Trade and Development) argues that three factors have led to what they call a “derivatives arms race” in the commodity markets.

Second, the commodities exchanges themselves have shifted from playing a role akin to that of utilities to businesses themselves. In their new guises they have an incentive to promote speculative trading.

Sun also points to a discussion about opening Qualified Foreign Institutional Investor (QFII) schemes in China. These will allow foreign investors to trade in its commodity futures markets, an alternative way of opening up the market to foreign investors.

Overall commodity derivatives is an area where there is no fundamental disagreement over the facts but striking differences over interpretation. For example, it is not disputed that the volume of trading on commodity derivatives has increased enormously but whether or not this is problematic remains contested.

For Flassbeck, also a professor at the University of Hamburg, it is incontrovertible that the markets are more financialised. “The volumes involved in speculative activity are far greater,” he says. This creates the potential for herding behaviour which in turn, in his view, makes it possible for prices to rise significantly above the level where they would otherwise be.

Salman Ahmed, the chief investment strategist at Lombard Odier Investment Managers, does not dismiss the potential for speculation but does not see it as a current problem. He maintains that the lack of correlation between different sub-sectors of the commodities market suggests it is a low ebb. “Intra-correlation between commodities has fallen by a significant amount.” If speculative forces were strong then correlations would be expected to be higher.

Ahmed also argues that there are two sides to financialisation: speculation (activity that pushes up prices) and hedging. In an efficient market, the two sides might be expected to balance each other out. “If your market is efficient then speculation should not move prices away from fundamentals too much,” he says.

The latter point is open for debate. Many would no doubt endorse it while some others would argue that hedging is part of the phenomenon of financialisation even though it is not designed to push up prices.

In her view, as long as markets fulfil the necessary conditions – they are public and competitive - they will tend to find the right level. “For every long position in commodity prices there should be a short position of the same magnitude,” she says. “On both sides, the parties are willing to interact at a given price.”

The debate about the impact that commodity derivatives has on underlying prices may never be properly resolved. However, there are conclusions on which it is possible for investors to be fairly sure.

Even if there were no markets in commodities derivatives it would be possible for prices to fluctuate substantially. All it takes is a shift in the balance between supply and demand. Indeed that is why it is difficult to untangle fundamental factors from financial ones.

It also seems beyond dispute that the commodities markets have become more financialised. Derivatives are nowadays used on a substantial scale. This certainly creates the ability to hedge; a benefit for companies as they can protect themselves against adverse price movements. But, it is hard to see how it does not at least create the potential to amplify price swings to a far greater extent than they would otherwise reach.