7
​IPE Conference: AP4 chief in no rush to add illiquids

​IPE Conference: AP4 chief in no rush to add illiquids

Sweden’s AP4 is to take its time to use the new freedom lawmakers granted last week on illiquid investments, according to the fund’s chief executive Niklas Ekvall.

During a panel discussion centring on long-termism versus short-termism for pension fund investment at the IPE Conference in Dublin this week, Ekvall said: “We are very happy that the new legislation has been decided by the parliament.”

He added: “We don’t feel any rush to invest in illiquid assets given that we have the flexibility to make investments when the right opportunities occur.”

Asked about when the pension fund would make use of its new ability to put up to 40% of its SEK367bn (€35.9bn) of assets into illiquid investments given current valuations, Ekvall told the conference that valuations were always an issue.

“You need to consider this in the very long term,” he said. 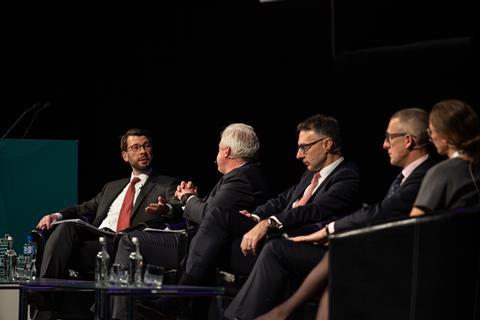 “We are building up the knowledge and the infrastructure to do illiquid investments, but I’m not saying we are going to go to maximum weighting from day one,” he said. “It seems everyone wants illiquid assets and we have some concerns about valuations, but we’re doing a private credit search for infra debt, loans and real estate debt at the moment.”

Fawcett said NEST had an advantage in this area among defined contribution (DC) schemes by being able to control its platform.

“The UK DC sector is not well structured because for most DC schemes they have a platform that requires steady liquidity,” the CIO said. “It inhibits long-term investing and particularly in long-term illiquid investments, so we’ve looked to other models.”

The DC master trust allocated to a hybrid property fund in 2013, which grants access to direct property investments but with exposure to real estate-related equity to enhance liquidity.

Fawcett cited the Australian system, in which 40-50% of investments were allocated to illiquid assets despite the system’s DC design.

Richard Williams, CIO of industry-wide pension scheme RPMI Railpen, pointed to future growth in private asset volumes for his fund, which he said had hired between 10 and 15 people in the private markets area over the past year or so. Most recently, the scheme last week hired Andrea Ash from Tesco Pension Fund as a private markets investment director.

“I think that process is largely complete,” Williams told the conference.

The Railpen scheme was unusual for a UK pension fund in being an open defined benefit (DB) scheme, and as a “surprisingly immature” scheme it was encouraged to invest in assets with a long-term horizon and not to be linked to a benchmark, he added.

“In general we don’t have as much risk as we would like in private assets, so that will go up,” Williams said. “We have some reservations about valuations, so we have to look at parts of the market where we think we have a competitive advantage – we have to access that in a different way than we did previously.”

Meanwhile, Niina Bergring, CIO and deputy chief executive of Finnish pension insurance company Veritas, said her fund’s asset allocation had been slightly defensive compared to those of its competitors this year.

“But we can never deviate too far,” she explained. “We’ve had a slightly lower equity exposure which was holding us back, but it is now benefiting us.”