As time passes since the UK’s decision to leave the EU, some of the trends of the months prior have returned. This includes: outperforming US equity markets and dwindling faith in US dollar strength against the euro and yen (albeit with some volatility) and in sterling, which continues to drift lower after its post-Brexit decline. Whether managers’ expectations have recovered as quickly as these trends is the subject of this month’s review.

The increase in positive bond sentiment in the post-Brexit survey period quickly reversed in the most recent period, with fewer managers now expecting sterling bond prices to rise. And after negative sentiment on dollar bonds fell to a long-term low in the August survey period, expectations have reversed quickly in the current outlook period. Expectations for lower dollar bond prices were once again highest among any denomination, and expectations for stability the lowest. 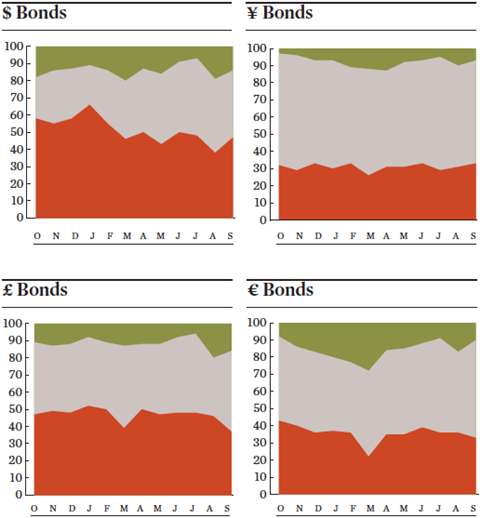 Managers seemed less willing to reverse their expectations towards equity markets. US markets, which bucked the risk-aversion theme of the prior period, continued to see heightened positive expectations, but also declines. The outlook for Asia was the only big reversal during the month, with an increase of 10% in the number of managers expecting a rise. Expectations for UK equities remained mostly unchanged from the immediate post-Brexit survey period. The proportion expecting stability was unchanged and remains the majority. Only in Asian equities is the consensus anything but stability. 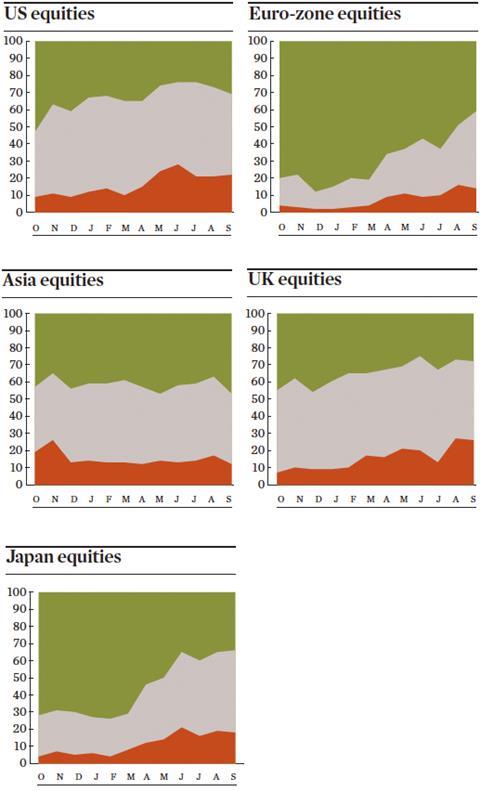 Manager expectations for sterling weakness rose sharply in the prior survey period and the proportion expecting further declines against the dollar rose to a long-term high, while expectations for the currency’s stability fell to a long-term low. While sterling would seem destined to decline, expectations for dollar strength against the euro and yen declined from the prior month’s near-term highs. Though the majority still believes the dollar will rise versus the euro and yen, prior to the Brexit vote the trend had been for this conviction to lessen. While the direction was similar (the dollar weakening), expectations are not nearly back in-line with the downward pre-Brexit trend.