More than 3,800 funds were seeking investors at the end of March for investment in unlisted asset classes such as real estate, private equity and private debt, according to data collated by Preqin for the first quarter of the year.

The majority of the 3,869 funds in the market were private equity strategies, accounting for two-thirds of funds and 61% of targeted assets.

There were a record 642 private real estate funds open to investors at the end of March seeking $206bn, Preqin reported.

There were 348 private debt funds seeking $168bn from investors, with almost half relating to direct lending vehicles.

A further 178 funds were targeting $133bn to invest in infrastructure. 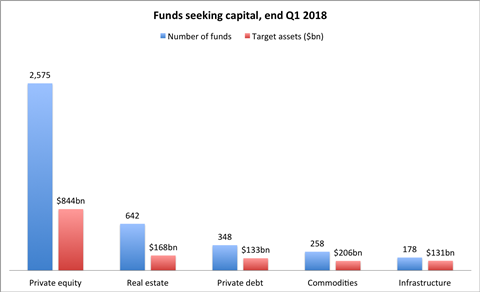 There were 3,869 funds seeking nearly $1.4trn from investors at the end of March

“Despite their misgivings over asset pricing and the potential impact on performance, investors in most asset classes indicated that they intend to commit as much or more capital  to the industry in 2018 as they did in 2017,” Preqin said in its Q1 2018 report.

“While this is encouraging in some respects, it also adds to the challenges investors face as they proceed through the year: the number of funds in market makes it even more difficult to find funds that suit investors’ priorities and goals.”

However, the data firm also warned that the number of funds closed and capital raised in the first quarter of the year indicated a slowdown relative to 2016 and 2017.

Tom Carr, head of private debt products at Preqin, said: “This may simply be that the industry is pausing for breath before beginning another fundraising cycle. Dry powder available to fund managers remains high, and it may be that investors are waiting for firms to begin putting capital to work before making further commitments.

“But the outlook for the rest  of 2018 remains positive: the conditions that prompted such strong fundraising in 2017 are still in place, and funds in market have already raised significant sums through interim closes. If they hold a final close this year, we could see fundraising totals rise rapidly.”