The Sami Parliament of Norway – which represents the Nordic region’s indigenous population – has vowed to keep pressure on the country’s sovereign wealth fund to shed its investments in companies behind the controversial Dakota Access Pipeline in the US.

Lobbying by the indigenous people who inhabit territory in the north of Norway, Sweden, Finland, and Russia in support of the Standing Rock Sioux tribe in the US appears to have been instrumental in persuading municipal pension fund KLP to divest its involvement in the pipeline project earlier this week.

Norway’s NOK7.7trn (€841bn) Government Pension Fund Global (GPFG) has yet to make such a move.

Vibeke Larsen, president of the Sami Parliament, told IPE: “Other Nordic pension funds have sold this project, but the government pension fund is still in it.”

The fact that the Norwegian state was investing in the “black snake” – protesters’ nickname for the pipeline – was hard to swallow, she said.

A Sami Parliament spokesman added that the assembly would continue to lobby Norwegian bank DNB, which is partly owned by the state, and the GPFG over the issue.

The Norwegian parliament is expected to hold finance committee hearings this month or in April about guidelines for the exclusion of companies from the GPFG’s investment universe.

Norges Bank Investment Management (NBIM), which manages the GPFG, did not comment on the level of investment the fund had in the US pipeline project.

Decisions on exclusions of companies are based on recommendations from the Council on Ethics, which is appointed by the Ministry of Finance.

“The Sami Parliament suggests taking some wording of indigenous peoples’ rights into account in the guidelines,” the Sami spokesman said, adding that parliament representatives would take part in the hearings. 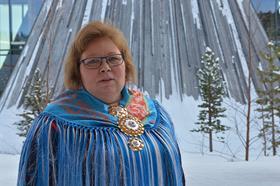 Larsen said the Sami parliament had written to KLP over its continued investment in the pipeline companies, and she had also emailed the pension fund to bring to its attention a relevant statement of 3 March from the UN special rapporteur on the rights of indigenous peoples.

KLP then announced at a meeting with parliament representatives in Oslo on 13 March that it had decided to divest after all, despite having defended the ethical basis for the investments at the beginning of the month.

The fund cited the UN rapporteur’s statement along with a relevant past decision by the GPFG’s Council on Ethics as supporting documentation for its divestment move.

Larsen said she was pleased with KLP’s decision.

“But we would not like them to get into the same position later on in another project, so we are offering them some help regarding indigenous peoples’ rights,” she said. “They invest in 3,000 companies and sometimes they will come up against problems.”

Norwegian financial group Storebrand announced at the beginning on this month that it had sold all its shares in companies involved in the Dakota pipeline, and Nordic group Nordea excluded the companies in mid-February.

Meanwhile, Swedish state pension fund AP7 is considering divesting from its exposure to companies behind the project, a spokesman for the fund confirmed.

“There seems to be a solid basis for this,” he said.

More information would be available in June when the fund next revises its exclusion list, he said.