The goal is transparency but the reality is murky. When reading the press reports on trade reporting under the European Market Infrastructure Regulation (EMIR) you have to wonder, how can something so simple turn into something so complex and frustrating?

The premise is basic: send the details of your OTC trades, or have them sent, to one of six authorised trade repositories so that the regulators can review the data and look for evidence of systemic risk. In February 2014, Europe implemented a reporting regime that required all derivatives users to obtain a legal entity identifier (LEI), a unique alphanumeric code that identifies the counterparty to a trade, and a unique trade identifier (UTI) for that individual transaction. All new transactions with both the LEI and UTI embedded in the data are then reported to an authorised repository by both sides of the trade (‘double-sided reporting’).

The LEI/UTI requirement enables both sides of the trade to be identified. However, this pairing is necessary but not sufficient to give regulators the complete picture of individual firm and general market exposure, since there are approximately 90 data fields that have to be matched as well. A successful reporting process that informs the regulator and the market participant requires a thorough matching of the two sides of the trade.

The challenge: matching the trades

Despite the complexity, most market participants have been successful in submitting the data into a repository either themselves or through a delegated third party. However, there are still counterparties in Europe that do not have an official LEI. Thousands of European entities did not get LEIs in time and many still do not know they need one. For an investment or pension fund manager, LEIs must be assigned to each individual fund – which can run into the thousands. Each UTI should have an LEI embedded in it for identification purposes.

Once the data is submitted to a repository by each counterparty, directly or through a third party, the two sides of a trade are paired based on the UTI. If no UTI exists or each side of the trade has generated its own different UTI, the trades cannot be matched.

With bilaterally-agreed UTIs, matching can reach 99.7% of trades, explained Sandy Broderick, chief executive and president of DTCC’s Deriv/Serv repository at an FIA conference in mid-June. However, the bilaterally agreed UTIs represent a fraction of the outstanding trades. Without UTIs less than 30% can be validated Broderick observed. UnaVista and KDPW, ESMA- authorized trade repositories, have also experienced similar problems with missing LEIs and UTIs.

This situation is particularly acute for European buy-side firms that need to understand how the new regulations affect them, and then implement systems changes to manage trade data in a completely new way. While the European Securities and Markets Authority (ESMA) gave last minute guidance that suggested sell-side counterparties should issue the UTIs, not all buy-side firms are willing or able to ‘consume’ these sell-side-generated UTIs – and many sell-side institutions are also scrambling to modify their systems to accommodate this new string of data. Without a mandatory hierarchy for assigning the UTIs, confusion will continue to exist. 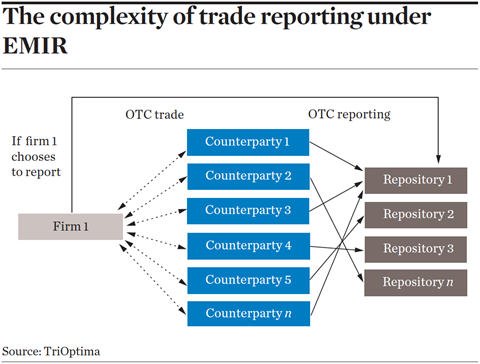 When a trade is reported to different trade repositories the matching is even more difficult. In early July, reports surfaced that DTCC, which accounts for roughly 75% of reported trade volume, was experiencing month-long delays in matching derivative trade reports between repositories. Inter-trade repository matching is another burden added to the long list of regulatory requirements that are clogging the system.

The figure captures the complexity of the data-generating and reporting structure under EMIR. One further wrinkle is that each counterparty to a trade is responsible for the accuracy of the data reported, even if that reporting has been delegated.

In mid-July, ESMA started to require that repositories send back incomplete derivatives trade reports to market participants in an effort to improve the low matching rates. While this measure may improve matching rates slightly, it does not solve the underlying problem of unassigned LEIs and UTI generation and consumption which will only be addressed if ESMA issues standards.

The data-reporting problem doesn’t end with LEIs and UTIs. Around 90 fields are required for each reported transaction which means there is significant scope for differences in both interpretation and format. Plain vanilla trades are pretty straightforward, but it has been difficult to get consensus on how to report more complicated structures. So even if complex trades can be matched on UTIs, it is likely they remain unmatched on a range of other important economic terms.

Adding to the challenge are confidentiality rules and process limitations that restrict the repository pairing process to identifying differences across only 12 of the approximately 90 fields reported. Given this lack of transparency, firms are seeking other ways to reconcile these wider trade details with their internal books and records.

Since September 2013, EMIR has required that all market participants reconcile their OTC derivative portfolios to avoid collateral disputes and market exposure. That process has been very effective in mitigating risk in the financial system. It also means that all of the trades that are currently being reported to the data repositories but are unmatched either within or between repositories have, in most cases, been matched in the reconciliation process (where trades are routinely matched without a common ID or identical matching trade economics). The opportunity exists to leverage the reconciliation results to gain transparency over UTI differences and omissions and work to resolve differences with counterparties.

While the challenges of UTIs and data standards continue to be negotiated, reporting firms have other tools to verify the accuracy of data reported to the repositories.  Reconciliation platforms can be used to compare authorised data feeds from registered trade repositories with the data from internal systems, normalise that data and act as a central hub to validate and reconcile it across all reported fields. With tools to track data inconsistencies and report on systemic differences in data, firms can identify the source of data discrepancies and jointly correct them.

Once the industry is able to actually access the data and understand the root causes of differences in data standards, it can work cooperatively to align these standards and achieve the initial regulatory goals.