Italian lawmakers are debating changes to state pensions that could undo the efforts made to stabilise the country’s public finances at the peak of the euro-zone debt crisis.

With a general election taking place in the first half of next year, political parties are promising to lower the state pension age and increase pension benefits. Such promises, if maintained, would mean higher public spending that could put Italy’s debt dynamics back in the danger zone, according to experts.

Last week the Italian Senate voted in favour of a measure to exclude workers in certain sectors from planned rises in retirement age, which reaches 67 years in 2019. The measure would exclude 10% of employees due to retire in 2019, including 14,600 workers in 15 different sectors such as nurses, teachers and employees of the building sector.

The provision is contained in the 2018 ‘legge di bilancio’, the law that sets the items and limits of government expenditure for the coming year. The law has passed to the Chamber of Deputies, the Italian parliament’s lower house.

Rises in Italy’s retirement age were established by the so-called ‘Fornero’ law in 2011, named after the then-labour and welfare minister Elsa Fornero. The law dramatically changed state pension provision and limited pension expenditure, but has been heavily criticised since. It was instrumental in building confidence among foreign investors that Italy would not default on its sovereign debt. Since its introduction, however, opposition parties have promised to scrap the law.

Italy currently spends the equivalent of 16% of its GDP on pension payments every year. It is the highest spender on pensions in the European Union after Greece, and pensions are the largest item of expenditure on Italy’s balance sheet.

Silvia Dall’Angelo, senior economist at Hermes Investment Management, said: “The sustainability of Italian debt is very narrow. Debt is at 132% of GDP, the second largest figure in the EU after Greece. The only way to sustain this is to run a primary surplus. The country cannot afford the luxury of diverging from its commitment to keep public expenditure tight.”

She added: “The sustainability of debt dynamics relies crucially on containing expenditure on state pensions. It would be quite irresponsible to raise expenditure, yet anti-establishment parties who claim to be ‘fresh’ forces seem to rely on the old bad habit of promising unhealthy expenditure rises.”

According to some estimates, halting the planned retirement age increases would cost the country €140bn in total by the year 2040. A recent study from the Italy’s finance ministry found that pension expenditure would rise to 17% of GDP when the country’s generation of baby boomers retired, while EU estimates put the figure at 20%.

“All this means there isn’t much leeway to raise pension expenditure further,” added Dall’Angelo.

Right-wing parties expected to form a coalition next year have made various pledges to improve pension benefits. The Northern League has promised to scrap the Fornero law, while Silvio Berlusconi’s Forza Italia party has pledged to raise base pension benefits to €1,000 per month.

However, the measure under discussion would spell the “end of complementary pensions”, according to a scathing article by Alberto Brambilla, chairman of Itinerari Previdenziali, a pension think-tank. 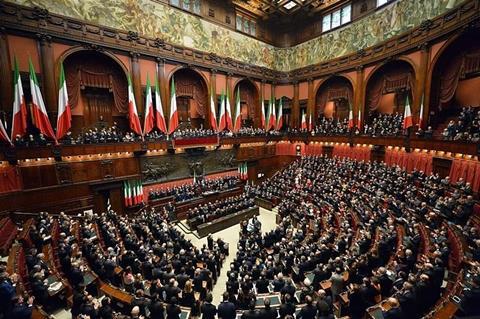 Italy’s parliament in session in 2015