The advisory board for the UK’s local government pension scheme (LGPS) has started the search for a provider to monitor and report on asset managers’ compliance with its cost transparency code.

The scheme advisory board (SAB) said it was procuring a system “in order to fulfil its stated intention to police the code”. The LGPS was a major player in developing the UK’s new cost transparency reporting system.

According to the tender notice, the board is looking for providers “who are able to design, build, host and support a system to validate/check for completion the templates received from the relevant fund managers for each of the relevant LGPS funds and/or pools”.

The LGPS’ own cost transparency code was launched in May 2017, and helped pave the way for the formation of the Cost Transparency Initiative (CTI), an industry-wide body working on cost reporting standards for UK institutional investors. CTI templates are due to be unveiled in the coming weeks.

LGPS funds and their providers are to transition to the CTI templates next year, but IPE understands that the compliance and reporting system the LGPS scheme advisory board is looking to establish is only intended for the LGPS, with the CTI yet to have decided on any kitemarks.

Speaking at a media event last week, Jeff Houston, secretary to the SAB, said that once such a system was in place the board would then need a rule “to kick [managers] out of the code, and it’s probably going to be ‘three strikes and you’re out’”. 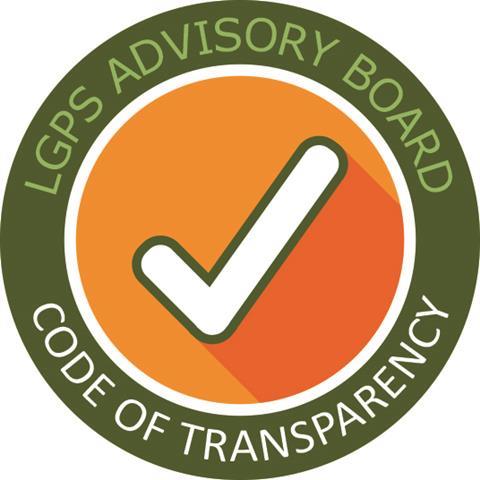 The LGPS Code of Transparency badge

“Part of making it public that you can be part of the code, and you can have the badge and use it in your marketing material… the other end of that process is ‘if you don’t do this we will very publicly take that off you’,” Houston said.

As at last week, 117 managers were signed up the LGPS cost transparency code, representing the vast majority of the scheme’s managers, and listed assets of some £180bn (€208bn).

Some managers have started to sign up to report costs in accordance with templates for alternative assets once these are ready.

The contract for the cost transparency compliance and transparency system is for five years and is estimated at £500,000.

The deadline for applications is 27 May. The SAB expects to award the contract during June and the core of the compliance system is likely to be operational by the end of 2019.

According to an SAB briefing note, the purpose of the compliance system was “to provide cost effective template data collection and LGPS Code compliance checking”.

It would take the form of an online facility intended to:

However, the system would also allow for some reporting and data comparison. For example, it could be used by LGPS clients to replace existing Excel format templates provided to them by managers, the tender notice said.

In addition it could allow clients to “view a useful but limited set of on-screen reporting and comparison tools”, or give permission to other LGPS clients or trusted third parties to access and export their template data.

The SAB said that in specifying the system it had “placed great emphasis on security and confidentiality”.