A novel by a Nobel prizewinner from Portugal is premised on what is perhaps the ultimate nightmare for the global pensions industry. José Saramago’s Intermitências da Morte (published in English as both Death with Interruptions and Death at Intervals) is based in an unnamed country where, on 1 January, people mysteriously stop dying. At first the miracle is celebrated with joy but it does not take long for people to realise the difficult financial and demographic challenges it poses.

Fiction has the advantage of being able to take such scenarios to extremes but it is not that far from what might be reality in the not too distant future. Aubrey de Grey, a gerontologist at the Sens Research Foundation in California, has shaken the pensions world with his claim that humans might one day live to a 1,000 years. The essence of his argument is that to achieve this goal would involve developing therapies that rejuvenate the human body rather than simply tackle disease. His favoured analogy is with vintage cars which, with the right maintenance, can last far longer than their original engineering intended.

Of course, many dismiss de Grey as a crank or, at best, a purveyor of science fiction. To some, his ample biblical beard might lend credence to such claims. But if only a fraction of what he says turns out be true it would have a profound global impact.

Indeed even mainstream demographers often talk of the ‘rectangularisation of the curve’ in relation to ageing. By this they mean that more and more people will live to what appears to be the present limit to the human life span of about 120 years. That compares with a current global average of about 71, according to the latest figures from the World Health Organization.

Of course, from a human perspective such improvements in life expectancy would be widely welcomed. But it poses formidable challenges for both the pensions industry (where liabilities could increase still further) and for life insurance (which could be suffer a diminished role).

Amy Kessler, the head of longevity risk transfer at Prudential Retirement (part of the US-based company rather than the UK-based Prudential plc), is preoccupied with how the financial services industry can tackle such challenges. As a pensions professional, her focus is on the practical matters rather than the scientific side or the philosophical questions it raises.

“We innovate for the best possible reason,” she says. “To prepare for the greying of society.” 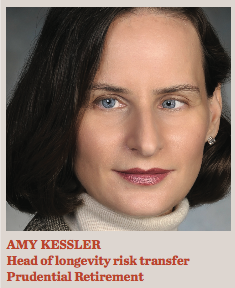 In broad terms, her view is that the industry has helped solve many problems over the past decade but there is still a lot of work to do. In particular, there is a desperate need to attract more capital to tackle the problem of increased longevity risk. “We need to help pension funds on the road to de-risking,” she says.

Kessler points to a wave of innovation since 2007 that has gone some way to tackling the challenges. She estimates more than $280bn (€250bn) has gone into the pension risk transfer transactions since then. This includes $17bn into Canada and $79bn into the US.

But by far the biggest market at present is the UK. Its contribution can be divided into $88bn into longevity risk transfer and another $102bn into a combination of buyouts and buy-ins. The former involves the conversion of an unknown future liability into a fixed payment over time. Buyouts involve the complete settlement of plan liability, while buy-ins involve partial settlement.

She identifies the £16bn (€18bn) BT Pension Scheme (BTPS) transaction as the largest and most innovative in the market so far. It was the first to use a captive insurance company owned by the pension fund. The deal allows BTPS to pay for its de-risking over time and shed any unwanted risk. Many financial analysts welcomed the deal as a benefit for the BT Group.

But Kessler says the scale of longevity risk is potentially so huge it is probably necessary to develop new types of solutions. Those currently in their seventies are probably too old to benefit from a jump in longevity but those now in their forties could well do. “The way this will play out is that it will be harder and harder to address the risk of younger age populations where uncertainty is the greatest,” she says.

She refers to the solution she favours as ‘sidecars’ – named after the one-wheeled vehicles sometimes attached to motorcycles. These are special purpose reinsurance vehicles that are already popular in other areas such as property and casualty insurance.

Such structures allow investors to take on some of the risks involved, in exchange for benefitting from returns which are uncorrelated with other markets. They could therefore provide a way of attracting additional capital into the market.

But there are several problems in developing such vehicles for the longevity risk market. Such vehicles normally have a life span of two or three years but the nature of longevity risk is that it is long-term. “I always thought about sidecars for our industry as very difficult because the tenor of the liability is longer than the investors wants,” says Kessler. “We need to pull shorter-term investors into our world in a way they would wish to play”. 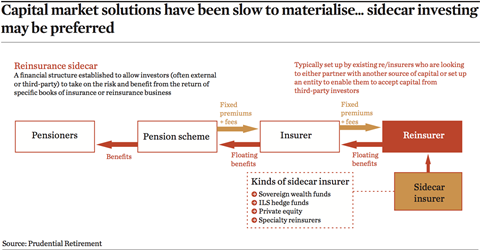 Then there are the classic difficulties of operating cross-border. “The folks who have the capacity and the interest to provide either longevity risk cover or the alternative capital are in different jurisdictions in different parts of the world from the folks who need it,” says Kessler.

In addition, there is the challenge of getting regulators to accept the use of such vehicles.

There is still a lot of work to do in the development of sidecars but, in Kessler’s view, they could help provide a solution to a pressing social need.