ABP is to offer its participants a visual insight into pension rights they have accrued at the pension fund.

The €389bn Dutch civil service pension scheme wants to use a simple graph to show how much is available for future benefits of an individual participant. The graph would show how much the worker and its sponsor have contributed and how much the amount has increased through returns on investment.

It thinks this would be an important way of restoring faith in pension fund participation among its participants.

ABP and its provider APG have developed a prototype of this ‘personal pensions pot’ overview (see image, in Dutch) together with a team of scheme participants. They surveyed 3,000 participants and carried out a focus group.

The pension scheme said 94% of the 3,000 participants wanted to receive the statement annually. 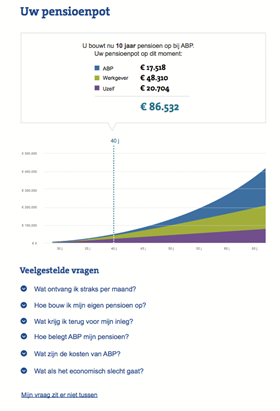 Raoul Willms, APG’s programme director, took pains to emphasise that the concept is effective, saying that 80% of the focus group said they found the information “clear, useful and interesting”.

The personal pensions pot visual led them to become more interested in their pension and willing to check their details on ABP’s individual pension portal, he said.

The pension fund will provide the personal pensions pot information for all its participants next year, according to Nicole Beuken, director of the pension fund.

The information would be on top of the mandatory uniform pensions statement (UPO), which shows workers their accrued pensions rights. The UPO is issued annually by the sponsor.

ABP said the initiative was meant to counter “widespread misconceptions”, such as many younger participants expecting the scheme to run empty, or people assuming their premiums exceeded future benefits.

The survey confirmed that the complexity and the far-off nature of pensions held people back from engaging with their pension. It found that participants preferred a simple overview, which included their future benefits as well as their currently accrued balance.

Willms described the personal pensions pot as an “ongoing experiment”, and said that neuro-marketing would be used to find out how participants respond to a shrinking balance and falling benefits.

He added that the information was also to address participants’ follow up questions, such as why they can’t take out the accrued assets and about how ABP invests.

Beuken stressed that the concept of the personal pensions pot would only work if it remained simple and would be developed in co-operation with participants.

ABP’s director said that the pension fund would like to share the results with the entire sector.