Accounting Matters: To virtually toss a coin, or not

• Accountancy industry flummoxed by the existential status of computer code

Cryptocurrencies force all of us, accountants included, to address fundamental questions. Among them is the intrinsic nature of money. Just what is it? Throughout history, money was a coin or bank note backed by a component of trust.

Over the past decade, however, Bitcoin and other cryptocurrencies have turned that thinking on its head. Because although they are the coin you cannot flip, cryptocurrencies represent units of account or exchange that can function in much the same way as cash or its proxies.

Historically, the trust element of money came from the fact that coins and banknotes were produced and guaranteed by a central authority or state. But with a cryptocurrency, this trust has to be set in some other way. Cryptocurrencies achieve this through a distributed ledger or blockchain.

This ledger builds trust by tracking every cryptocurrency unit in existence and is validated by an independent network of computers, or nodes. These have so far proved to be resilient to outside manipulation. These nodes essentially arrive at a consensus about which transactions are valid, and which are not.

But those who assume that accountants view cryptocurrencies as nothing more than cash should think again. International Financial Reporting Standards (IFRS) – it appears from the December 2016 meeting of the International Accounting Standards Board’s advisory forum (ASAF) – are surprisingly quiet on the topic, despite having an important role in helping the medium to gain widespread acceptance.

As the founder of the UK Cryptocurrency Association, Paul Ferris, told the meeting: “If standard-setters can step in, they can give certainty.” The problem, he says, is that when regulators and legislators look at cryptocurrencies, they think in terms of wrongdoing – despite every transaction, since their inception a decade ago, is eminently traceable.

The assumption that they are cash, begs a fundamental question: ‘What is cash?’ Essentially, it is a means of holding value, although IFRS literature offers little guidance.

International Accounting Standard (IAS) 32 Financial instruments: Presentation specifically includes “cash” in its definition of a financial asset, with both cash and cash equivalents defined in IAS 7. According to paragraph 7:6 in IAS 7, cash as cash in hand and demand deposits. As Henri Venter, the author of an Australian Accounting Standards Board (AASB) paper presented to the ASAF meeting observed, IAS 7 offers no further definition of “cash” or “demand deposits”.

In particular, Venter singled out a sentence in IAS32 that refers to cash as a “medium of exchange”, but that begs the question: What is a medium of exchange? After all, just because something can be exchanged does not make it cash.

Venter says: “If you explore the concept in a slightly broader context, it boils down to whether entities would accept this as a means of payment for goods or services. Now, some entities do, around the world, accept cryptocurrencies; however, they are by no means widely accepted… So I think there is an argument for saying that a means of exchange gets to the point where it becomes legal tender, or at least some sort of central authority [dictates] that it is a valid means of exchange.” 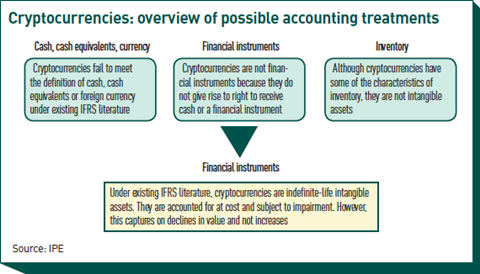 But could cryptocurrencies qualify as cash equivalents? The author of the AASB paper says not. As he saw it, a particular sticking point is the level of volatility inherent in exchange-traded cryptocurrencies.

Meanwhile, International Accounting Standards Board (IASB) director Peter Clark says he sensed cryptocurrencies were cash but saw the low trading volumes in the medium as a stumbling block. He says: “I was personally attracted to seeing it as cash because it makes the accounting issues quite easy to deal with. But… the place where we think it fell down was if you look at economists’ definitions, one of the notions they have is that it is a unit of account.

“And I think what we thought that presupposed was that there would be transactions denominated in Bitcoin – not that you would price them in sterling and convert to Bitcoin to remit it to the other side of the world and then convert back… If we saw lots of transactions priced in cryptocurrencies, that might make it look a lot more like cash. But until we see that, I think we were hesitant.” In some ways, we have been here before, both with the European Currency Unit (ECU), a precursor to the euro, and the convertible rouble among former Soviet bloc trading partners.

Yet neither the ECU nor the convertible rouble were true currencies; instead, they were an accounting construct that allowed economies with different currencies to account for transactions on a common basis. The same might hold true were a business to prepare its accounts with Bitcoin as its functional currency.

So, if cryptocurrencies are neither cash nor cash equivalents – at least not yet – are they financial instruments? Probably not, because they fail to pass through the gateway that requires a financial instrument to give rise to a contractual entitlement to receive cashflows.

The IASB’s vice-chair, Sue Lloyd, however, says the board could fix that problem. “What we could do,” she says “would be to amend the scope of IFRS 9, in the same way we did for commodity derivatives. We sort of deemed them to be a financial instrument through P&L [a profit and loss account]. We could say they are currencies and [are] fair value through profit or loss.”

That fair value through profit or loss designation could prove hard to arrive at if the board were to treat cryptocurrencies as intangible assets under IAS 38, Intangible Assets.

IAS 38 says that if an item is sold in the course of business, it should be accounted as inventory under IAS 2. This means it is valued at the lower of cost or net realisable value. A commodity broker trader, on the other hand, can do fair value accounting. Here lies the problem: does merely holding a cryptocurrency for investment purposes make the holder a commodity trader? Probably not.

It means that cryptocurrencies are in an accounting no-man’s land. Despite the possibility that the IASB knows how it wants to treat cryptocurrencies – as something other than intangible assets – the IASB’s agenda leaves little prospect the board will even start to address the issue inside the next half decade.