More and more, it seems that any investor wishing to be taken seriously about its commitment to impact investing would not want to be seen quibbling about the importance of measurement.

In the space of less than two weeks, two knowledgeable organisations last month made it clear that measurement should be seen as a defining feature of impact investing.

The Global Impact Investing Network included it in one of the four “core characteristics” of impact investing that it set out in April. Shortly afterwards, the International Finance Corporation (IFC), the investment arm of the World Bank, also identified “a system of measurement” as one of the distinguishing attributes of impact investing.

Actis, a $15bn (€13bn) investor in growth markets across Africa, Asia and Latin America, has expertise in impact measurement and the amount of interest it is generating.

Shami Nissan, head of responsible investment at the general partner (GP), says it started “thinking deeply about this” over a year ago. This followed an increased number of questions from investors seeking a better understanding of the difference Actis’ investments made and how this related to the UN Sustainable Development Goals.

Actis, which was spun out of CDC, the UK development finance institution, has to some extent monitored the impact of its investments for years. However, Nissan says it did not have a “consistent and systematic way to measure those impacts from investment to investment”.

It therefore decided to engage in a concerted effort to devise a suitable framework. The ‘Actis Impact Score’ is the fruit of that labour. In a report last month, the IFC referred to impact investing as “a dynamic but somewhat disorganised market of diverse participants, standards, and concepts”.

Against this backdrop, it feels positive that Actis, in developing its scoring framework, drew on the work already carried out by the Impact Management Project (IMP), the forum that has brought together more than 2,000 organisations from across the value chain to establish norms about how to talk about, measure and manage impact.

One of its achievements was to reach consensus, after “hundreds of in-person and virtual conversations”, that impact can be deconstructed into five dimensions – what, who, how much, contribution, and risk.

Six-step process
Actis, says Nissan, “fully respected” these dimensions, with its sole adjustment being the addition of a numerical scale for each.

There are six steps under Actis’s scoring framework. The first relates to the ‘what’ dimension in the IMP conceptualisation. It requires Actis to identify up to five material impacts associated with the investment in an enterprise or project that meet three conditions: they generate positive outcomes for people or the planet; are measurable; and can be influenced to increase over the life of the investment.

The next five steps are then taken for each of the impacts identified in this first step. 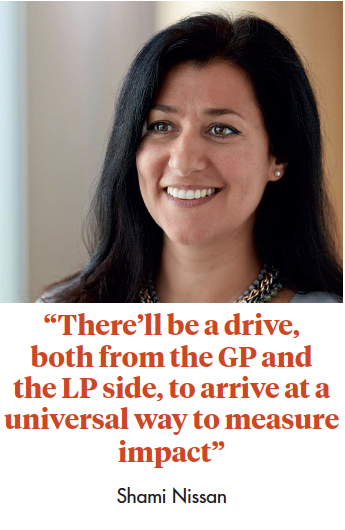 The second step overall is about gauging the likely significance of the expected impact in terms of the depth and duration of change (IMP’s “how much”).

The third, involves thinking about the people expected to benefit from the investment, the “who”. The guiding questions here are: how many people are due to be positively affected and how well or underserved were they before the investment?

Step four in the framework involves assessing what in industry jargon is often referred to as the ‘additionality’ of a given investment. That is the contribution it made to achieving the impact outcomes. As Actis puts it: “Establish how essential the investor and/or management team were to achieving the positive impact. Would it have happened anyway?”

In the fifth step, the sum of the scores assigned in the preceding three steps are multiplied by a ‘CAP factor’. This depends on whether the impacts identified in the opening step are derived from a core, ancillary, or peripheral activity of the investee enterprise or project.

This calculation generates the final impact score, which enables Actis to compare different types of impacts, such as that of a healthcare provider in Africa or a renewable energy company in India.

There is one more step under the framework. That is an assessment of the risk of the investment failing to achieve its intended impact. This does not feed into the score, but “it does help with investment decision-making”, says Actis.

Since January, Actis has assessed every new investment according to this framework. It will also use the framework to generate a score when it exits an investment, which can be compared with the baseline score.

“What that then gives you is an understanding of how much your impact improved during your ownership period,” says Nissan.

This is interesting to many underlying investors, who tended to have two questions, she says. “One is how impactful is the investment anyway, full stop. But secondly, what did you, Actis, do during your ownership period?”

According to Nissan, developing the framework required Actis “to do a lot more of our own work than we maybe envisaged at the beginning”.

“We didn’t necessarily set out to go on a big proprietary exercise,” she says.