Ahead of the curve: Hold faith in Chinese equities

For emerging markets stocks, 2018 was a challenging year. Mainland Chinese stocks – the ‘A shares’ – suffered particularly badly, falling just over 25% through the end of December, as proxied by the CSI 300 index.

That will not come as good news to investors who took the plunge into China’s equity markets upon MSCI’s inclusion of A shares in its popular benchmarks during the second half of the year. In light of such disappointment, there will always be a temptation to shy away from significant Chinese exposure. As is often the case, such a focus on short-run performance might obscure a strong long-term rationale for making a greater allocation to China in 2019.

For one thing, MSCI’s push last year into A shares was just the beginning. Through the end of 2018, the benchmark allocation to mainland Chinese stocks had only reached 5% of full inclusion, amounting to well under 1% of the weight of the MSCI Emerging Markets index. Early this year, MSCI will evaluate a plan to fast-track quadrupling the inclusion factor to 20%, a move that should result in tens of billions of dollars of additional passive flows into Chinese stocks. Of course, even if that plan is approved, there is still a long way to go before the rebalancing of global benchmarks into Chinese stocks is complete.

To put the magnitude of these changes into perspective, consider these facts: In 2003, China’s equity market cap was about $420bn, placing it behind smaller economies such as Switzerland and Canada in stock market size. By the end of 2017, mainland stocks had grown to $8.7trn, surpassing Japan as the world’s second-largest equity market, and trailing only the US.

At the beginning of 2018, China represented about 15% of global GDP and 10% of global market cap but only constituted 3.7% of the global MSCI ACWI portfolio – none of which was in A shares. With trillions of dollars tracking MSCI’s indices, anything close to inclusion at China’s representative market cap would lead to massive flows of indexed dollars into Chinese equities, creating a significant tailwind for valuations that could benefit early movers.

On the topic of valuation, an important implication of recent declines in Chinese stocks has been a corresponding improvement in aggregate valuation indicators that investors commonly consult when timing asset allocation decisions. 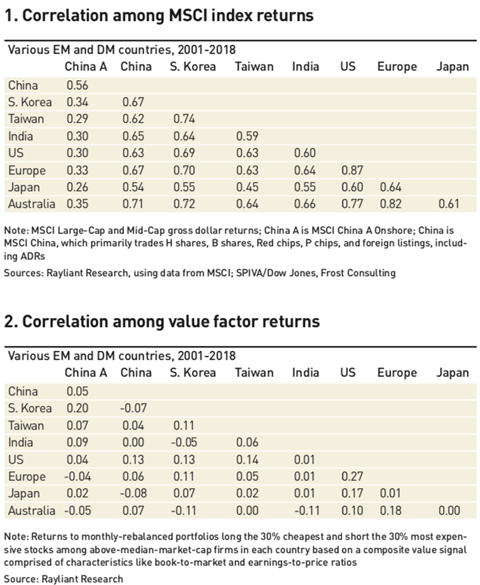 While there is evidence that strong country-level earnings growth has not always translated into better stock market performance, it is worth remembering that growth rates in emerging markets – and China in particular  –  are generally expected to outpace those of developed countries. On the face of it, such forecasts could make the ordering of ratios just referred to harder to justify. Even without considering China’s growth story, the simple intuitive case for erring on the side of buying relatively cheap assets is strong enough that it is not too great a leap to conclude China looks comparatively attractive at current valuations.

Of course, returns are hard to predict and outperformance is not certain. Diversification, on the other hand, is a much more reliable source of benefit to investors. In this sense, A shares turn out to be a particularly good fit in the portfolios of many asset owners. Figure 1 shows the correlations among equities in a range of developed and emerging markets since 2001, when the MSCI China A index was launched. One of the first things to note is that emerging market stocks are generally less correlated with equities in developed markets, although mainland Chinese stocks (China A) clearly steal the show in terms of potential diversification benefits.

A second important lesson from the table of correlations is that offshore Chinese stocks (China), which many investors have historically used as a substitute for direct investment in A shares, are not particularly highly correlated with mainland stocks (correlation of 0.56), but do bear markedly higher correlations with developed markets stocks (correlation coefficients ranging from 0.54 to 0.71). The upshot is that offshore proxies for mainland Chinese equities are not capable of delivering the same benefits in terms of enhancing one’s risk-adjusted performance – another point in favour of following MSCI into A shares.

But pure market exposure is only half the story. When allocating to A shares, most investors aim for outperformance relative to passive benchmarks, attempting to earn an ‘alpha’ through active bets on specific Chinese stocks. In terms of alpha, too, A shares could present an attractive opportunity for asset owners.

For the moment, let us take it for granted that alpha exists to be harvested among mainland Chinese stocks. Once again, we turn to correlations and emphasise the benefits of investment in A shares on the grounds of portfolio diversification. Figure 2 shows correlations calculated across portfolios simulated in each country that long the cheapest and short the most expensive stocks based on valuation ratios like the P/E ratio described before.

It turns out that the correlations in value factor alpha across countries are substantially lower than the correlations among passive market returns shown before. Factor investors seem even better poised to reap the benefits of diversification than those taking a purely passive approach. Not surprisingly, alpha sourced from A shares is effectively uncorrelated with that in developed markets.

Beyond diversification, perhaps one of the strongest arguments to be made for investing in China gets back to where we typically imagine most alpha comes from in the first place – market inefficiency. Trading in mainland Chinese stocks is dominated by retail investors. By some accounts, upwards of 80-90% of share turnover stems from trading by individuals as opposed to institutions. By contrast, in developed markets, retail trading volume is inconsequential.

Jason Hsu is chairman and CIO of Rayliant Global Advisors. Phillip Wool is the firm’s director of research