Ahead of the curve: The bubbles to come

Market bubbles would not happen in a perfect world. But humans are not perfect and our economies are inherently unstable.

A bubble can be defined as a situation where an asset trades well above its intrinsic value. The problem is that we all have different ideas about intrinsic value. A bubble is often only revealed when it bursts, which is not helpful either for those planning to invest in the early stages of the bubble or those looking to exit before it bursts.

In practice, the ‘manias’ driving bubbles are different but they typically involve a doubling or tripling of prices over a two to three-year period, with an acceleration in the last year. Our analysis shows that prices tend to double in the final 12 months and increase by more than 40% in the final three months. The descent is just as rapid, though with a short-lived rebound three to six months after the peak.

The causes of bubbles and crashes are interesting because classical economic theory tells us that bubbles are impossible. In a world of rational buyers and sellers, armed with perfect information, prices should not stray from intrinsic value.

Shocks can push prices away from fair-value but economic forces should quickly bring them back to reality. In the real world, investors do not have the same information sets and do not calculate intrinsic value in the same way; second, we are human and do not always behave rationally and third, such hypotheses ignore the role of profits and how investment spending is financed.

So, what causes bubbles and crashes? Potential causes include:

• External shocks: Examples of these include financial deregulation and the oil price shock.

• Technical innovation: Examples include the advent of railways and the dot-com bubble. In such cases, a technological revolution brings undisputed efficiency gains but not as much as markets come to believe.

• Financial innovation: Banks and other financial institutions’ innovations may bring genuine benefits to their customers but can sometimes imperil the financial system, especially when it allows an increase in asset/capital ratios or the general risk profile of the balance sheet.

• Easy money: JK Galbraith, one of the best-known economists of the 20th century, reported that brokers’ loans were growing by $400m per month during the summer of 1929, for example.

• Narrative: A good story to excite/scare the masses.

It is harder to say what triggers crashes. They may simply happen when bubbles lose their impetus. Perhaps because credit dries up, the economic landscape changes, everybody who can buy has already bought or there is a collective awakening – the underlying narrative is disproven or it is realised that prices are way out of line with fundamental value.

Foreseeing the catalyst for a downturn is easier said than done. Many authors have commented on the tendency for trading volumes to balloon as bubbles approach their peaks, the market equivalent of a feeding frenzy.

To gauge turnover, we analysed average holding periods. The NYSE average holding period was about 0.8 years (9.6 months) in 1928-29. It then remained broadly in the four- to eight-year range from the end of World War II until the mid-1970s before gradually declining to one year in 2001 and reached a low of 0.7 years (8.4 months) in 2008. It has since trended up.

Overconfidence is a feature of bubbles. This often blinds investors to the storm clouds gathering on the horizon. US house building had been falling for several years before 1929. Industrial production peaked in June 1929 and fell sharply over the coming months (the stock market peaked in September but faith was not lost for many months to come).

Likewise, US home sales peaked in July/August 2005 and fell by 30% over the next 12 months, well before industrial production and the S&P 500 peaked in the fourth quarter of 2007.

In terms of which bubbles are forming today, a lot of attention has focused on China, which has seen the most significant rise globally in private sector debt, with the non-financial private sector debt to GDP ratio now in line with that seen in Japan during the bubble of the 1980s. The ratio reached a 218% peak in Japan in 1994, several years after the bursting of the stock market bubble, and the private sector looks to have been deleveraging ever since.

The peak in the US came in 2008 at 168% and the private sector debt ratio appears to have been trending down since. Recent household sector deleveraging has been offset in the US by re-leveraging in the corporate sector where debt ratios are now at historical highs.

The stock market bubbles of Japan (1980s) and the US (late 1990s) were fanned by plentiful credit. On the other hand, the Chinese stock market bubble of 2007 was not (perhaps because savings were plentiful – the current account surplus was 10% of GDP that year). The subsequent explosion in credit does not appear to have fuelled the stock market but rather real estate and other physical assets/productive capacity. For example, floorspace under construction more than doubled from 2008 to 2013.

The US equity market, however, is back to dot-com bubble levels and beyond that of the 1980s Japanese bubble, judged by the market capitalisation to GDP ratio. This is odd, because it does not feel like a mania, except for the NYSE FANG Plus index. 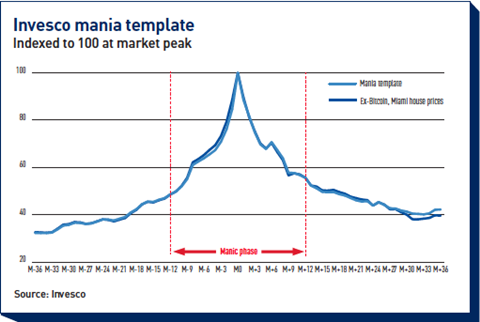 However, we suspect that debt-fuelled share buybacks have played a role in pushing the market to these levels. The Shiller PE, the price earnings ratio based on average inflation-adjusted earnings over the previous 10 years, is currently at 30. That is also close to its September 1929 peak of 33. From an economic perspective, US home sales and housing starts hit a recent peak in late-2017/early-2018 and manufacturing output has not risen in the first four months of this year.

Bubbles should not happen but they do, because we are human. Also, the role of profits and debt makes our economies inherently unstable. Full employment is but a transitory phase and tranquillity leads to complacency and bubbles.

Given that credit is often at the root of a bubble, China has been the obvious source over the past 10 years. But the money has found its way into real estate and productive assets, rather than a stock market bubble. US stocks largely do not display manic behaviour but we do worry about bubble level valuations.

Paul Jackson is head of EMEA ETFs Research at Invesco