Analysis: How NEST wants to shape the future of retirement

After the UK government removed compulsory annuitisation for DC savers, the country’s largest provider needed to reshape its offering – blending income drawdown with a form of deferred annuity income. Taha Lokhandwala looks at the details

This weekend saw the publication of the National Employment Savings Trust’s (NEST) ideas on how to guide its members into a safe and secure retirement income, with the government-backed defined contribution (DC) master trust looking to adapt to a new environment where annuities are no longer the norm.

As the UK’s largest auto-enrolment scheme, with 2.1m members, NEST currently has a system of target-date funds that invest expecting full cash withdrawal (given the current low pot size) or an annuity. However, after the government changed legislation this year, annuities are no longer compulsory, giving members complete freedom, and NEST – with its public service obligation – an opportunity to create a new system.

The new default system will see a blend between income drawdown, a cash fund and saving towards an annuity, run simultaneously in a novel approach. At retirement, 90% of the member’s fund will transfer to the income drawdown fund and be invested in an income-generating portfolio. The monthly returns will provide a retirement income while 2% of the fund, annually, will move into another fund to purchase a deferred annuity. The remaining 10% will be moved into a cash fund for members to access as and when required, and be topped up should the income-drawdown fund provide excess returns.

NEST’s proposed system is based on six principles drawn from a survey its membership earlier this year. This showed savers prioritise inflation-protected income, guaranteed income until death, protection for market falls and access to cash lump sums. NEST says its new system, in theory, meets these requirements.

While NEST isn’t looking to change the way it builds up a member’s savings, the design of its income-drawdown fund’s suitability is important.

A concern for the scheme with offering a drawdown option is sequential risk – the risk of a market downturn in the early years damaging the fund’s sustainability. The risk, it says, can be managed in several ways. NEST says whatever approach it uses, it recognises there is no silver bullet and that a variety of techniques will be necessary. To manage sequential risk, the provider intends to use volatility management overlays – where it sells futures contracts as volatility in risk assets increases, with the aim of protecting the fund from excessive market downturns. Given that it expects to provide around 4% as annual income, it will also invest in cash flow assets, such as property and corporate debt. The added advantage of this, NEST says, is that it will not be required to sell assets to meet cash flows, should assets prices fall.

Any approach, it says, should reduce systemic risk of being forced to sell assets. It should also ensure enough capacity to invest in desired assets and that there is no systematic bias towards risky or overvalued assets – in a nod towards alternative beta strategies akin to those used in its accumulation portfolio.

NEST has been busy modelling, and – given that the aim is to provide a steady retirement income while minimising the probability that money runs out before the secured income kicks in – the fund should carry what it calls a low ‘risk of ruin’.

On the basis of drawing down 4% every year, NEST modelled three investment risk options and calculated probabilities of exhausting a member’s savings – assumed to be £100,000 (€142,000) – within 20 years. A low-risk portfolio of mainly fixed income would carry a 25% chance of running out of money before the deferred annuity came into effect, and roughly six months before hand.

However, NEST says its optimal medium-risk portfolio was much more balanced. The option, invested in fixed income, property and equities, carries only a 2% chance of not making the assumed 20-year period between retirement and the deferred annuity. Its higher-risk portfolio carries a 5% chance, but NEST said this could happen within 10 years. This was modelled on a sequence of market crashes akin to a ‘dotcom crash’ followed immediately by a global financial crisis.

NEST said its modelling suggested that any strategy would have to be prudent and include “extremely robust risk management”. On the flip side, its models show a £100,000 pot invested in the medium-risk strategy carried a nearly 17% chance of having £30,000 remaining even after 20 years of 4% withdrawal and 2% siphoned off for the annuity purchase. (see chart) 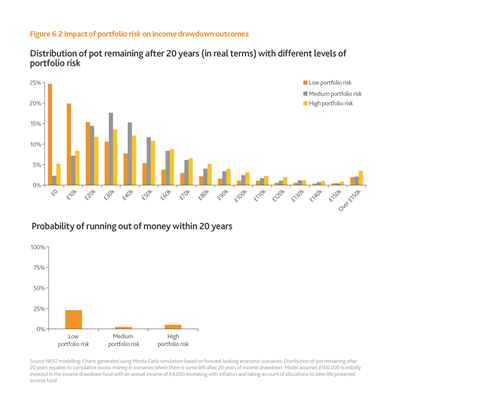 Despite inflation protection being such a key request from its membership, further research suggested it should be “managed but not necessarily hedged”. NEST said guaranteed inflation protection was expensive, and that investments should provide cover in most circumstances. “This does not preclude the possibility portfolios for some cohorts would have an inflation hedge, if pricing were attractive,” it says. “In general, inflation protection would be provided by property and equities.”

Securing an income in later life

In its briefing, NEST has avoided using the terminology ‘deferred annuity’, as it currently remains agnostic on how this should be offered, citing the need for further industry input. It is currently torn between two developing ideas in the US and Australia.

One is the American advanced life deferred annuity (ALDA) approach that offers members a secure income well ahead of when it is needed. Another is dividing members into cohorts in yearly or tri-annual tranches and operating a collective DC (CDC) scheme, as currently found in Australia. Annuity funds are pooled, and monthly incomes provided from premiums and investment returns.

NEST’s approach of siphoning off 2% of the invested drawdown fund on an annual basis prevents members from losing a large chunk of the savings in one fell swoop. Also, by not purchasing the annuity at retirement, even if deferred for 20 years, the member can benefit from mortality credit and investment returns.

NEST CIO Mark Fawcett said the design provides more flexibility because a commitment to an annuity isn’t made on day one – and, should the member decide against any form of later life income, he can choose not to. Purchasing it earlier on in retirement would be more expensive anyway, and hamper the ability to provide a monthly income from the drawdown fund that would be depleted.

By this reasoning, NEST has also ruled out purchasing monthly or yearly deferred annuities – akin to the approach of Denmark’s ATP – which would offer annuity rate smoothing but also tie in a member very early on.

The ALDA approach is ideal for NEST’s current assumed idea of saving for the income from 65 to 75 and then purchasing the income to kick in at 85. However, while these products survive and grow in the US, solvency requirements in the UK make this an expensive offering for insurers. Further, US insurers have much wider mortality pools given the lack of enhanced or medically underwritten annuities compared with the UK – making premiums on annuities attractive to US firms.

NEST also has concerns about the CDC approach. While it would not be subject to insurance capital requirements, and therefore would be cheaper to offer, it does not guarantee an income level like an ALDA, but is rather more a ‘best efforts’ basis. While hedging could be placed in via longevity swaps to improve security, such instruments fluctuate in price and could only be added opportunistically.

Fawcett says NEST has deliberately remained neutral on how to provide the ‘later-life income’, as it chooses to call it. While its overall blueprint is in place to meet member needs, much work and industry consultation is required before it can be implemented. NEST estimates the minimum requirement for this option would be around £30,000. Given that the average pot size is £200, and for those over 55 still below £1,000, the scheme has time to perfect its ideas.