Following the approval by trade union members, the Dutch pensions accord – finalised by the social partners and the government earlier in June – is official.

Unions have secured a reduction of the rate at which the official retirement age will increase, as well as assurances on early retirement rights for workers in physically demanding jobs and flexibility on rules regarding rights cuts at ailing pension funds. Schemes can now start implementing the immediate effects, including informing their participants about the changes.

However, the pensions agreement is far from complete. The accord still faces hurdles, as the difficult issues regarding the second-pillar system have yet to be explored. A steering group has been tasked with fleshing out the new pensions contract, and it will also have to tackle the transition from average to degressive pensions accrual.

Both matters have been controversial for years. The new pensions contract in particular has already seen many versions – each with its passionate supporters and opponents – during the past five years.

The steering group is to look into two options, including individual accrual combined with a collective benefits phase – the option favoured by the Dutch government. The other would aim for a collective defined contribution accrual plan without financial buffers or nominal guarantees. The unions have argued for years for a collective approach.

Assumption changes
The options must take into account variable factors – primarily assumptions for future returns and the discount rate for liabilities. A committee chaired by former finance minister and Eurogroup president Jeroen Dijsselbloem published its scheduled review of both variables shortly after the pensions agreement was announced – although the committee was operating separately.

Its recommendation to lower the parameters for future returns – crucial for establishing contribution levels at pension funds – for the next five years was not entirely unexpected. However, a proposed change to the method for setting the ultimate forward rate (UFR) as part of the discount rate came as quite a shock. Instead of reducing liabilities and improving pension funds’ coverage ratios, as urged by the unions, the proposed method could lead to an average funding level decrease of 2.5 percentage points. 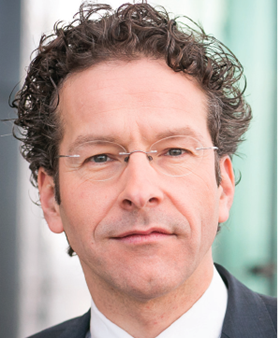 This would negate a move by social affairs minister Wouter Koolmees to ease the pressure of rights cuts. He promised to reduce the minimum funding level  from 104.2% to 100%, during negotiations.

Supervisor De Nederlandsche Bank (DNB) has already said it would introduce the new UFR as of 2021, explaining that the new method would bring pension funds’ financial position “in line with the financial [and] economic reality”.

Accrual rate problems
Switching to another way of pensions accrual is also a stumbling block for future negotiations. The government has adopted the previous cabinet’s decision to move from average pensions accrual to one that reduces as the member approaches retirement. Experts agree that the latter is a fairer approach from an actuarial standpoint, as few workers stay with a single employer or pension fund throughout their entire career.

However, the government was seemingly unaware of the implications of introducing degressive pensions accrual. Not only is the transition expected to be complicated, but it will also be expensive. Estimates of compensation for older workers, who would be negatively affected by the changes, range from €25bn to €100bn depending on the level of recompense. This is the main reason why pension funds have never really embraced the concept.

However, whereas the unions have long been waiting for a government offer to foot at least part of the bill, the government has made clear that the transition costs would have to be borne by pension funds themselves. The €19bn Philips Pensioenfonds, for example, has estimated its costs at €600m, and has urged the government to look carefully into the effects of the change before taking further measures. The remedy could be worse than the problem, argued the fund.

The €77bn metal scheme PMT has said that it lacked the means to implement the accrual transition. PMT’s coverage hovers around 100%, and the pension fund is facing rights cuts next year.

The transition costs could damage pension funds’ funding levels and indexation potential, and are likely to undo the positive effect of the cabinet’s decision to temporarily lower the minimum required funding level to reduce the chances of cuts to pensions and accrued rights. 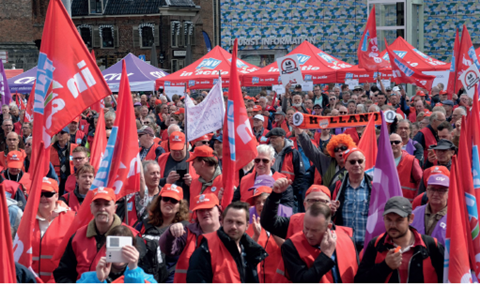 After a national public transport strike at the end of May, Dutch trade unions continued to organise industrial action against plans to raise the state pension age

Unions satisfied – so far
Having secured concessions on the pension age, early retirement and funding requirements, the unions do not seem to be overly worried about what the details of the pensions contract and accrual changes might bring.

The outcome of the next phase would be judged on its result, said Tuur Elzinga, lead negotiator for the Federation of Dutch Trade Unions (FNV), the Netherlands’ largest union. The FNV said negotiators had worked around the unknown elements of the reforms and aimed for “carefully formulated targets”.

The unions also assessed the Dijsselbloem committee’s advice on the assumptions for returns and the discount rate for liabilities in this context. In their opinion, these variables will not affect the core of the pensions agreement. They argue that the conditions of “perspective for indexation” and “fair to all generations” are solid.

According to Elzinga, if these conditions are not met, the accord is off. Given the potential for different interpretations, the Dutch pensions sector should brace itself for further delays.