No pension system made the top grade in this year’s Melbourne Mercer Global Pensions Index ranking.

Each of the 30 pension systems now covered by the report was assessed for its adequacy, sustainability and integrity.

This year was the first time the influential survey included data about economic growth as a factor in the scoring for sustainability, said David Knox, senior partner at Mercer in Australia and the creator of the index.

“It’s a really important sustainability factor,” Knox said. “That was the biggest change, and it’s the main reason Denmark and the Netherlands dropped to a B+.”

Denmark’s economic output grew by 1.3% in 2016, according to the World Bank, while the Netherlands recorded growth of 2.1%.

The Danish system still ranks as Europe’s – and the world’s – top pension system overall, scoring 78.9 out of a possible 100, benefiting particularly from its sustainability score, which was the best of the 30 systems assessed.

Jan Hansen, deputy director of the Danish insurance and pension association Forsikring & Pension (F&P), said: “The report highlights the weaknesses of the Danish pension system – namely, low savings, low employment among the elderly and poor incentives to save [for] retirement in the years just before the state pension age.”

It is not worth many Danes on normal incomes saving up for a pension in the run-up to pensionable age, the association said. This is because any private savings they build up in these years are offset against state benefits such as the pension supplement and housing benefit. 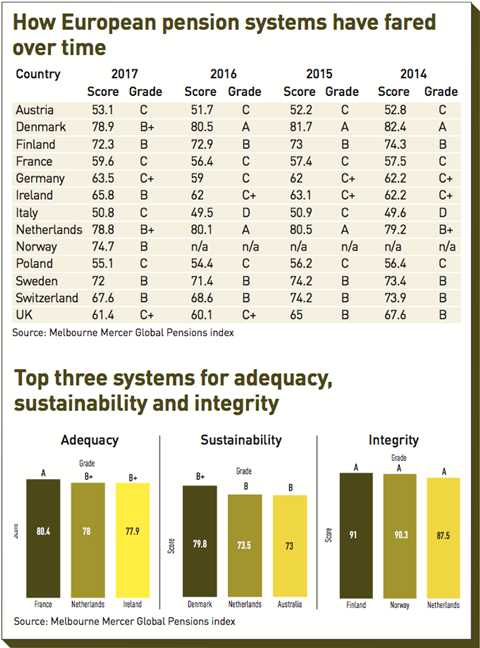 “The problems are connected, so if politicians made it attractive to save up for a pension, there would also be a rise in employment and savings among older people,” Hansen said.

In August the government launched a tax plan that included an extra tax deduction for pension contributions, which Hansen said could help Denmark return to an A grade.

The Netherlands scored 78.8, and ranked in the top three for all three sections.

Bart Brenninkmeijer, business development leader at Mercer Marsh Benefits in the Netherlands, said the country could learn much from Denmark, as – contrary to the Dutch pensions system – the Danish system is largely defined contribution.

“The Danish system scores high on participant confidence, despite having much less pensions capital,” he told IPE’s Dutch sister publication Pensioen Pro. “The question is how can we increase confidence, and how can we prepare people for a new system with more choice?”

Another addition to this year’s survey – albeit with less of an impact – was the inclusion of voluntary systems. Previously the survey had only assessed the auto-enrolment or mandatory sections of a country’s system, but Knox said Mercer had decided to include countries with “strong” voluntary systems, defined as having achieved at least 30% coverage.

“Germany, the UK, the US and Canada probably picked up a little, but the change didn’t have a huge effect on the results,” Knox said.

Norway made its debut in the Melbourne Mercer index at number four overall, scoring 74.7 and achieving a B grade. Its ranking was aided in particular by a strong integrity score, reflecting excellent overall regulation and governance. The index also included Colombia and New Zealand for the first time. They achieved C+ and B respectively.

The report added that “the sustainability of some current systems is under threat” due to the multiple effects of ageing populations.

Austria, Denmark, Finland, France, Germany, Italy, the Netherlands and Poland all needed to increase workforce participation among older age groups, the report said, while France, Sweden, Switzerland and the UK should all consider raising the state pension age.

The Melbourne Mercer report also recommended that a handful of countries – including Poland, Switzerland and the UK – should introduce a requirement that at least some of an individual’s retirement benefits should be taken as an income stream.

Despite the roll-out of auto-enrolment putting the UK in a good position to improve its score in future surveys, the retirement income issue has emerged in the past couple of years since the removal of the requirement to buy an annuity with DC savings.

However, Knox said such an income stream “doesn’t have to be an annuity” and suggested the development of a default retirement product with flexibility of income and the ability for individuals to opt out.

“Accumulating money in DC is easy – you’re just putting money in, it’s being invested, and it grows,” Knox said. “Then you hit retirement and everybody is in a different position; the variety of situations is huge. To say there is one product that is suitable for everyone is wrong. On the other hand a default product is a good thing.”