Banking on life after politics

At 49, Brian Hayes is young man by political standards. Having started in Irish politics early with his appointment to the Irish Senate in the mid 1990s, Hayes was elected to the Dáil, the lower house, before he was 30, taking a seat for the Fine Gail party.

Following his election to the European Parliament in 2014, the golfing enthusiast Hayes served as rapporteur, or parliamentary coordinator, for the centre-right European People’s Party for both the IORP II directive and the pan-European Personal Pensions (PEPP) framework.

Despite his relative youth, Hayes is to step down from European politics this year. “Life can go on after politics,” as he puts it.

So from the end of the current Parliamentary term in May, the current vice-chair of the Parliament’s influential economic and monetary affairs committee (ECON) will return to Dublin. There he will take up the post of CEO of the Banking & Payments Federation Ireland (BPFI).

Hayes has direct experience in this field. From 2011-14 he was minister of state in the finance department, a time of immense stress on Ireland’s economy and society following the country’s banking crisis and the €64bn bailout. 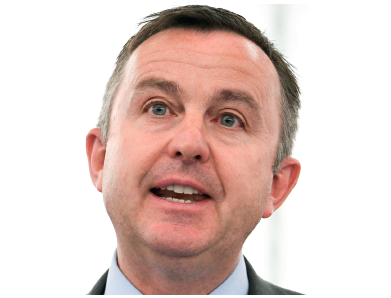 According to BPFI, excluding credit unions, Ireland’s bank balance sheets combined were about €535bn at the end of 2017.

How does Hayes see the future of banking? “In Ireland I believe that the bank industry can be a key driver for the economy,” he replies. “And here, the need is to rebuild trust. For this a ‘bank cultural board’ has started to look into the matter of reputation.

“Now an important challenge is to bring up the role of the smaller banks, and to achieve efficient cross-border banking,” Hayes continues. “So far we have never seen an efficient system in operation. We really need to deepen the market. Furthermore, we need a pan-Europeans evaluation system to help meet a real opportunity. That would pay off well for both large and small member states.”

On PEPP, Hayes points to the “substantially successful agreement” that was reached shortly before the end of 2018. Yes, it will have to pass through various further procedures, but “PEPP is 90% likely to achieve success in the near future”, according to the MEP.

The main issue is conflict between Parliament and national governments on the issue of supervision. Parliament would prefer the European Insurance and Occupational Pensions Authority EIOPA to supervise PEPPs, while the Council would like supervisory power to be in the hands of national governments, with EIOPA as a back-up.

PEPP is a component of the Capital Markets Union, a key element of the Juncker Commission. What is Hayes’ reaction to the CMU’s otherwise slow progress through the EU’s legislative machine?

“Yes, I know people are disappointed. We do need a faster pace,” he replies. But he quickly focuses on various successful agreements, such as the EU’s Prospectus Regulation to apply in full in July 2019 as a single passport system for issuers.

Hayes also refers to agreement on the Securitisation Regulation, which provides a high degree of harmonised protection for investors in securitised products. Here, the European Securities and Markets Authority (ESMA) published its technical standards in August 2018. Similarly, Hayes points to recent developments to the European venture capital funds (EuVECA) Regulation, which creates a pan-European marketing passport for venture capital funds.

By the end of last year, just three of the 13 CMU legislative initiatives had been agreed by Parliament and Council, although high-priority reforms to insolvency look set to be cleared soon. This legislation is important to the CMU as it removes barriers to cross-border investment.

Hayes confesses he was pessimistic on this package. He says: “I feared that the national governments would not have been persuaded to take this important step for legislative harmonisation. I thought lobbying pressure from their national legal professions would prevail.”

Brexit also casts a shadow over the CMU, given the current EU financial services landscape. Hayes frames the question in the following terms: “Going into the next EU mandate period, how will it be possible to have a properly functioning CMU when 80% of relevant activity is located in the UK, and the UK could be outside the EU?”

In May 2018, a Eurobarometer poll found that 60% of EU citizens believe their country’s membership is a good thing. In Ireland, the figure was over 80%. As he leaves Brussels, how does Hayes reflect on the effectiveness of the EU and the Brussels legislative and policy machine?

Despite these high levels of support, the MEP believes there is work to do in getting the message of the EU’s success through to the average citizen.

“The fact is, the EU simply doesn’t click with its main audience. As for selling the product, this is simply not done in a way the people can understand. If you don’t solve these shortfalls you open the door to petty nationalism.”