With two full months of post-US election information to sift though, shifts in manager expectations have been as extreme as some reactions to, and rhetoric from, our newest world leader. Even more so than the prior month, the conviction that there will be movements in certain asset classes is surprisingly high. Expectations are not always the best predictor of future outcomes, but when they are universally in-line we have to wonder: is it plausible we can all be right? What we have learned in the past four months is that certainty can be fleeting.

We can all rest assured. Yen, sterling and euro bond prices are probably not going to rise. At no other time in the last two years has the cumulative difference between expectations of rising and falling prices been as great as the recent survey period. That is not the most interesting part, however. While everyone is leaning more towards yen, sterling and euro bond prices falling than any other point in two years, a greater portion believes US bond prices will fall than any of the other currency denominations. This is somewhat convoluted, but essentially the belief is that bond prices are universally going down, and we should expect more volatility in that process for US denominated bonds than other currencies.

The last time expectations for US equities to rise were this much greater than expectations of decline was in March 2015. After moving sideways for a couple of months after that time, US equities entered a drawdown from which it took more than a year to recover. What is concerning is that only two months earlier there was almost parity between those expecting a rise versus a fall, and in the middle of 2016 the sentiment was tilted toward a decline. So, we have shifted from expectation of a decline in June to strong expectations of gains, at a level last seen followed by a prolonged drawdown.

The certainty in currency markets could not be as assured as the others, right? Well, almost. Dollar strength is still believed to be the norm against the euro and the yen, but while still the majority, it is less sure the dollar will continue to strengthen versus the pound. 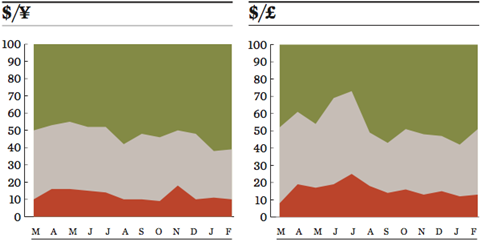 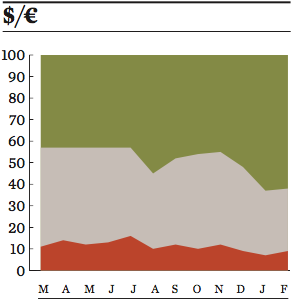